Shame on Canada for Letting these Murderous Residential Schools Operate On and On and On for More than Than 100 Years! 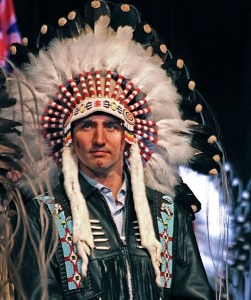 Canada’s Prime Minister Justin Trudeau, doing his fuzzy wuzzy ”I’m in to reconciliation’ thing, in native head dress in 2016. Why isn’t he treating the deaths of Indigenous children like crimes against humanity and investigating all those still alive and involved in operating residential schools? Hey Mr. Prime Minister, cut with the baloney and treat this genocide like the crime that it is.

Canada’s ever so fuzzy wuzzy, try-to-sound-good Liberal Prime Minister, Justin Trudeau, came out with a statement this June 24th (included below) saying how “terribly saddened” he is about the discovery of another mass grave of more than 700 Indigenous children on the grounds of another former residential school in Saskatchewan.

This one was discovered just a few weeks after another mass grave, covering the bodies of more than 200 Indigenous children, was found on the grounds of a former residential school in Kamloops, British Columbia.

“Terribly saddned?” What in hell does that mean?

One frankly gets tired of this Prime Minister’s fuzzy, feel-good hot air. 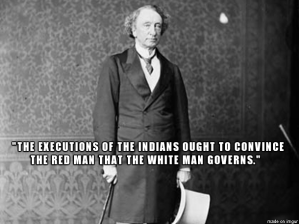 Canada’s first Prime Minister, John A. Macdonald, sure did get the soft treatment in public school history books. Not much, if anything, about his policies around gutting Indigenous culture there.

He, along with some Premiers of  provincial governments across Canada,  seem to think they can get away with sprinkling a few million dollars at First Nations peoples to do their own work to find more of these mass graves – as if that makes up for more than a hundred years of using the RCMP and other agents of the Canadian government to abduct Indigenous children from their families and commit them to these God-awful residential schools where so many of them suffered and died.

Never mind the complicity of churches, including the Anglican and Catholic churches, played in the running of these schools.

The leading culprit in all of this is the Canadian government.

I find it very troubling that when I went through the public school system in Ontario in the 1960s and 1970s, even while these residential schools were still operating in this and other provinces across Canada, there was never a word of them in our  our text books or classes.

We sure were fed a bunch of bunk about what a great guy (save for a bit of a drinking problem) Canada’s first prime minister, John A. MacDonald was – a prime minister who was all in for operating these genocidal schools, and who instituted policies for starving Indigenous people to death in the mid-west so more lands could be stolen from them.

When I think about that, I am left thinking about one of the lyrics in a Paul Simon song – “When I look back at all the crap I learned in high school.”

Yes, I am tired of Trudeau saying how sorry he is.

Never mind throwing a few million bucks at Indigenous communities to find more of these graves, as if the federal government doesn’t already have a pretty good idea where most of them are.

Why aren’t these areas being turned in to crime scenes and why isn’t the federal government going after all those who are still alive, who had anything to do with operating or working in these residential schools, and targeting them for investigation, as possible criminals?

After all, aren’t we talking about alleged crimes against humanity here? Or are these just indigenous people, so let’s just see if we can find more mass graves and get it over with.

Some of us may have noticed how quickly the RCMP moved in and put yellow tape around the remains of a couple of Catholic Churches in British Columbia, burned down in the wake of the mass grave discovery in that province. A mass grave is not treated like  a crime scene in Canada but the possible torching of a Catholic church is.

In the meantime Canada, these mass grave stories are making world news and downgrading our nation’s reputation as a leader in decency toward people.

How sad is that,  just a week away from  Canada Day!

I am terribly saddened to learn that the remains of children had been found in unmarked graves  near the former Marieval (Cowessess) Residential School in Saskatchewan. My heart breaks for the Cowessess First Nation, and for all Indigenous communities across Canada. 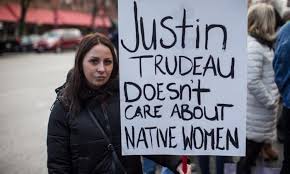 “I recognize these findings only deepen the pain that families, survivors, and all Indigenous peoples and communities are already feeling, and that they reaffirm a truth that they have long known. The hurt and the trauma that you  feel is Canada’s responsibility to bear, and the government will continue to provide Indigenous communities across the country with the funding and resources  they need to bring these terrible wrongs to light. While we cannot bring back  those who were lost, we can – and we will – tell the truth of these injustices,  and we will forever honour their memory.

“The findings in Marieval and Kamloops are part of a larger tragedy. They are a  shameful reminder of the systemic racism, discrimination, and injustice that  Indigenous peoples have faced – and continue to face – in this country. And  together, we must acknowledge this truth, learn from our past, and walk the shared path of reconciliation, so we can build a better future.”