“We are really looking to support research that is Indigenous-centred: developed in conjunction with Indigenous Peoples and contributing in positive, reciprocal ways to Indigenous Peoples.” – Robyn Bourgeois, Brock’s Acting Vice-Provost, Indigenous Engagement

A News Release from Brock University in Niagara Ontario

Niagara, Ontario – In the months before she became Acting Vice-Provost, Indigenous Engagement, Robyn Bourgeois led a process that was to yield a first for Brock University’s Indigenous researchers and researchers studying Indigenous topics.

The Associate Professor of Women’s and Gender Studies held extensive consultations with Two Row Council, the Aboriginal Education Council, other Indigenous members of the Brock community and staff from the Office of Research Services to prepare the Terms of Reference for an unprecedented internal funding source.

The University’s first-ever Indigenous Research Grant, valued up to $7,500 per proposal, is now open for applications from Brock faculty.

Research and creative activities led by, or in partnership with, First Nations, Inuit and Métis Peoples will be given priority, although research proposals involving Indigenous Peoples located around the world are also welcome.

Topics identified through the consultations as being high priority include:

The grant aims to help researchers develop their research programs and creative activities so they can apply to external granting agencies such as the Social Sciences and Humanities Research Council of Canada for funding.

It also aims to support a more equitable and just way of scholarship, says Bourgeois. 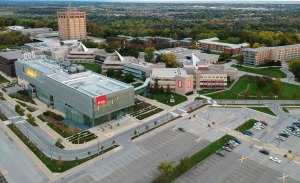 The campus of Brock University, overlooking the Niagara Escarpment in St. Catharines, Ontario

“It’s research that centres Indigenous ways of knowing and doing and resists extractive research relationships where Indigenous Peoples are treated as objects of study and, instead, ensures that they are partners in the creation of knowledge and in processes including the development of research strategies, ownership of data and dissemination of findings,” she says.

“The program supports multiple pillars of the Brock Institutional Strategic Plan, especially building research capacity, and supporting a culture of reconciliation and decolonization,” he says.

“I’m grateful to colleagues on Two Row Council and the Aboriginal Education Council for their input on the program, and to Dr. Robyn Bourgeois for her work over the past year in facilitating that input and crafting the program details.”

Applications will be accepted on a continuous basis and Brock faculty can apply for the funding through the Indigenous Research Grant webpage.<https://brocku.sharepoint.com/Research-Services/SitePages/Indigenous-Research-Grant.aspx>