How in Hell Can You Have a Bi-National Business Relationship with a country of Whacked Out Xenophobes? It’s Like Trying to Live with a Mental Case

You want to play fast and loose with a killer virus in the United States. They stay out of Canada.

“Canada has taken advantage of us as usual,” barfed America’s monster Trump during a visit to a washing machine factory in Ohio this August 6th before – for reasons that might make sense only in his twisted mind – he called out that he is imposing another round of potentially damaging tariffs on Canadian aluminum, effective August 16th.

We have taken at advantage of the United States as usual, the orange monster says? What in hell is it with that!

Canada has had a long history of being a good neighbour and friend of the United States.

We have lived in peace with our American neighbours, and have even celebrated it in Niagara with an each“Friendship Festival” each Canada Day and Fourth of July at the Fort Erie/Buffalo border that, under the current circumstances, this once-America-loving Canadian could give a damn if we ever have again.

So now, just a month or so after Canada signed a new post-NAFTA trade agreement between our country, Mexico and the United States, Trump pulls this garbage with 10 per cent tariff on Canadian aluminum that could cripple jobs in both countries.

And there is reportedly no evidence to back up Trump’s claim that Canadian aluminum is hurting American jobs. As some American political commentators have already said, this move may have more to do with Trump’s tanking election prospects and his need to appeal to his base of loonies by finding more enemies to blame for his crises in his country that he has exacerbated himself.

As I post this commentary, Canada’s Deputy Prime Minister Christia Freeland is in the process of  announcing retaliatory steps (and we’ll have more to post on that later).

In my view, they should include immediately shutting down the Peace Bridge and all other Canada-U.S. border crossings to American truckers still allowed to cross under the guise of “essential traffic” during this pandemic.

Our retaliatory steps should also include cancelling our partnership in the recently signed trade agreement between our country, the United States and Mexico – renegotiating a replacement pact with Mexico only, and working to shift and further our business and trade partnerships as soon as possible with more stable, reliable nations in Europe and other parts of the world. 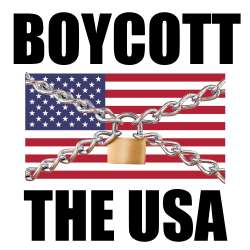 Finally, our border should be sealed indefinitely to all Americans, unless they happen to be dual citizens. They have a hate on for the rest of the world? They want to dump all over us? Then keep them the hell out of our country.

The United States, under a crypto-fascist Trump regime that now shows strong signs of not relinquishing power, regardless of who wins this coming November’s presidential election, has proven itself to be an unreliable and even hostile party for Canada to do business with.

And millions of Americans who support Trump have surfed along with his xenophobic rhetoric that old allies like Canada are countries that should be seen as possible security threats and enemies. Only a few months ago, his millions of adoring enablers continued cheering him as he, for some mind-boggling reason, threatened to line the Canada-U.S. border with American troops.

So this latest aluminum tariff move should be the last straw.

For the sake of our future, we Canadians need to get to work now on shutting down our business and trade relationship with what is rapidly becoming a totally dysfunctional totalitarian state across the border.

In the meantime, as individual Canadians, we can do our part to show Trump Nation how we feel about the hostility it is showing us by considering never setting foot on American soil again and by not buying any product in our country that says ‘Made in the U.S.A’ on it.

From the Office of Ontario’s Premier

“We are disappointed that the U.S. has re-imposed tariffs on imports of aluminum products from Canada, particularly at a time when our trade partnership will be essential to our economic recovery. These tariffs undermine the benefits of the highly integrated U.S.-Ontario trading relationship that are set to continue under the new Canada-United States-Mexico Agreement (CUSMA).

Ontario does $390 billion CAD in two-way trade with the U.S. every year. We are the top customer of 19 U.S. states and the second top customer to 11 others. Last year, Ontario purchased $2.3 billion CAD in aluminum products from the U.S. alone, supporting hundreds of American jobs and businesses. As one of the U.S.’ top customers, these tariffs hurt the mutual prosperity and security that has benefitted our two nations for centuries.

While these re-imposed tariffs will have a damaging impact on Ontario businesses, workers and consumers, they will also hurt American businesses and consumers. According to the U.S. Chamber of Commerce, ‘bringing back these tariffs would be like a bad horror movie. Most of the U.S. aluminum sector opposes them, and they’ll hurt American manufacturers who use aluminum as an input.’

This sentiment was echoed by The Aluminum Association, which represents more than 120 U.S. companies across the entire industry value chain, saying ‘this dynamic is hurting aluminum workers today’ and ‘efforts to ‘Blame Canada’ miss the mark.’

We welcome the federal government’s commitment to defend the interests of Ontario’s aluminum sector and businesses in Canada and the U.S. We urge them to press the U.S. administration for immediate and permanent removal of its tariffs on Canadian aluminum, and to ensure that no other trade impediments such as quotas are introduced. Ontario will continue its engagement with our federal and state partners from the U.S. to draw attention to the negative impacts of the tariffs, as well as emphasize the mutual benefits of free and open trade.

The economic downturn resulting from COVID-19 is an even greater incentive to maintain our longstanding and positive trade relationships and ensure Ontario businesses have access to the world’s markets. The U.S. imposition of tariffs on imports from Canada will negatively impact economic recovery efforts and hurt workers in the U.S. and Canada. Strengthening our unique trading partnership will only ensure that everyday consumers, workers and businesses can emerge from this period of economic uncertainty in a position of strength.”