If Only Ontario Could Cut a Deal with New York State, Maybe We Could Re-Open Our Shared Border Crossings

New York’s Governor, Along with Governors of New Jersey and Connecticut Cut Deal to Quarantine Travellers from U.S. States where COVID-19 Cases are Spiking

“We’ve gone through hell once — we don’t want to go through it again,” said New State Governor Andrew Cuomo during one of his widely watched updates on the COVID-19 crisis this June 24th.

The Governor of New York State – a good neighbour of Ontario – could not be more right.

Governor Cuomo’s great state, thanks to New York City’s status as a major gateway for world travel, and to a population density in that city that is a feeding frenzy for this opportunistic, killer virus, went from few cases of COVID-19 in early February to an epicentre of cases that saw coffins of the dead being stacked up in freezer trucks parked at loading docks at the back door of  hospitals.

Yet thanks to the leadership of that good governor and the willingness of people across his state, New York has not only flattened the curve, but brought it significantly sloping down at a time when many other U.S. states with a fetish for the reckless and dangerous stupidity of Donald Trump, are watching their numbers of COVID-19 cases and deaths spike.

Back in the old days. A line-up of cars at the Peace Bridge border crossing – a crossing that has been closed to all but essential traffic since last March. If only we could open it to only traffic from residents in Ontario, New York and other low COVID states like New Jersey and Connecticut.

So no wonder Governor Cuomo, in concert with the governors of Connecticut and New Jersey, have agreed to quarantine for at least 14 days anyone entering their states from one where the COVID case loads are extra-ordinary high.

The governors clearly appear to be basing their requirement for quarantine on people from states with high cases only. But it just so happens that many of these states are ones where polls and voting patterns show an inordinate number of people who are drinking Trump’s poison believe the pandemic is now going away, and was probably nothing more than a “hoax” or something akin to a mild form of the flu in the first place.

The more power to these governors, given the heroic work they have all done, in concert with the citizens of New York, New Jersey and Connecticut, to bring their caseloads so far down.

Too bad on Ontario can’t work with them to limit border crossings to them and people in our province who have, for the most part, worked just as hard to contain the spread of this killer virus.

None of us can afford, after the sacrifices we have all made, to allow individuals who believe in the Trump doctrine that ‘if who slow down the testing, the virus will go away’, to enter our regions and possibly trigger new outbreaks that leaves us going through hell again.

At the same time, if there is any way we can limit border crossings to these U.S. states and our province of Ontario, wouldn’t that be good for people who enjoy the company of each other on both sides.

Would it not be nice if good neighbours in the Buffalo, New York and Niagara, Ontario area can get back together without working about some Trumpie in a state where the COVID counts are spiking re-infecting us?

“(This Wednesday, June 24th), I announced, along with New Jersey Governor Phil Murphy and Connecticut Governor Ned Lamont, a joint initiative that requires all individuals traveling to NY, NJ or CT from listed states with significant community spread of COVID-19 to quarantine for a 14-day period upon arrival.

“This advisory goes into effect tonight at midnight and as of today, it applies to anyone traveling from Alabama, Arkansas, Arizona, Florida, North Carolina, South Carolina, Texas, Utah and Washington. (The list of states will be updated online as the data changes). 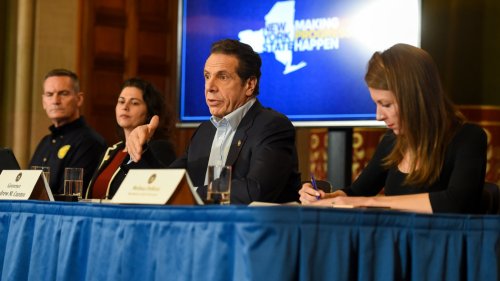 New York State Governor Andrew Cuomo, third from left, with expert staff at the table with him, at one of his many well-watched COVID update briefings over the past three months Few leaders on this crisis has inspired as much public respect as he has.

“Throughout this entire pandemic, we’ve worked closely with our neighbors and will continue to do so because our tri-state region is interconnects, and what happens in New York happens in New Jersey and happens in Connecticut, too.

“New Yorkers have come together to get the viral transmission rate down and we don’t want to see it go up again because people are traveling into the state and bringing the virus with them.

“We’ve gone through hell once — we don’t want to go through it again.”

The total number of COVID hospitalizations continues to decline. Total hospitalizations fell to 1,071, from 1,104 the previous day. Sadly, 17 people in New York passed away due to COVID-19.

To read a recent post on Niagara At Large on the continued U.S.-Canada border restrictions, click on – https://niagaraatlarge.com/2020/06/17/sadly-yet-thankfully-canada-u-s-border-is-closed-for-at-least-one-more-month/