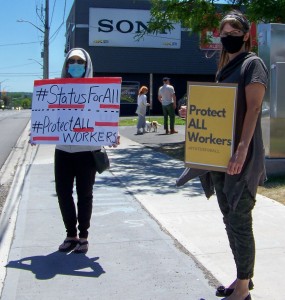 One the more telling things this pandemic has done, for better or worse over the past three or four months, is amplify the weaknesses and inequalities in our systems for looking after one another – for treating one another fairly.

That is certainly the case when it comes to millions of people, from grocery store clerks to those working in long-term care homes, which have been labelled “essential workers” and have even been celebrated as “frontline heroes” during this COVID crisis, yet are struggling to get by on low wages and little or no benefits.

And it is also the case for countless migrant workers that owners and operators of agricultural operations in Niagara and other parts of Ontario employ each year under a Government of Canada Temporary Foreign Worker’s Program that, by many accounts, fails to do justice for them.

We received another hint of the neglect at least some migrant workers face when a newspaper in Niagara recently reported that at a St. Catharines area greenhouse, stricken by an outbreak of COVID-19 among half of its migrant workforce.

According to the newspaper report, workers at this greenhouse operation were not provided with masks – with what one might assume would be the bare minimum of protection they would be granted, given the health emergency this virus poses – because there were no provincial or federal rules or regulations requiring managers of greenhouses or other agricultural-related operations to do so.

A caravan of cars, hosted by the Canada-wide Migrant Workers Alliance for Change, including activists from the Niagara Migrant Workers Interest Group, and the Ontario Federation of Labour (OFL), including the Niagara Regional Labour Council, started in Toronto and Hamilton, and wound its way past farms where migrants work in the Grimsby and Lincoln area before stopping for a rally this past Saturday, June 13th in front of the constituency office of St. Catharines Liberal MP Chris Bittle.

Those participating in the caravan called for permanent status for migrant workers so that they might all enjoy decent working conditions and the same protections and benefits that Canadian workers do.

Kit Andres, who spoke at the rally on behalf of the Niagara Migrant Workers Interest Group, said the federal and provincial government have known for years that conditions for migrant workers on at least some farms are unacceptable, and that the workers find themselves in a position of possibly being deported if they complain. 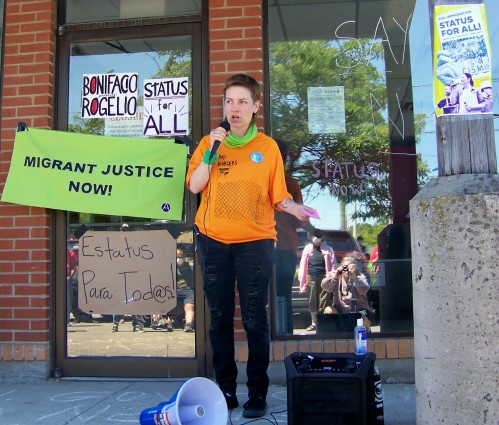 Andres took a few moments out to name some migrants who recently died while working on farms in the province, including one in his 50s who succumbed to COVID-related symptoms.

They want “production” from migrant workers, said Andres, “but they don’t give a shit whether they live or die.”

Organizers of the cararvan made clear to those who turned out that there are certainly many farm operators who treat migrant workers well, but changing Canada’s immigration system in ways that grants workers  permanent status is possible way of dealing with those operators who don’t.

Bittle’s constituency office was closed during the Saturday rally and the MP was not present during the time several dozen people gathered in the parking lot outside.

For more information, here is an excerpt from a media advisory organizers of the caravan circulated this past June 12th –

The Niagara Regional Labour Council calls on the Trudeau government to move towards an immigration system that is based on permanency to ensure decent work for all.

As low-waged migrant workers can only work for the specific employer listed on their work permit it is next to impossible for them to change employer. While there are many good employers, there are many others who are not. Migrant workers fear losing their jobs and being sent back home if they speak out about their working and living conditions. They depend on their job to provide for their families back home.

The Niagara Regional Labour Council is calling upon the federal government to:

Change the immigration system in order to allow all present migrant workers and undocumented workers in Canada to have landed status now.  All people coming to Canada in the future have permanent status upon arrival.

“Migrant workers such as our seasonal agricultural workers are an essential part of Niagara’s and Canada’s workforce. “ said Lou Ann Binning, President of the Niagara District Regional Labour Council. “They deserve to have the same basic rights and protections such as healthcare, decent work, pensions and employment insurance as all other Canadian workers .” 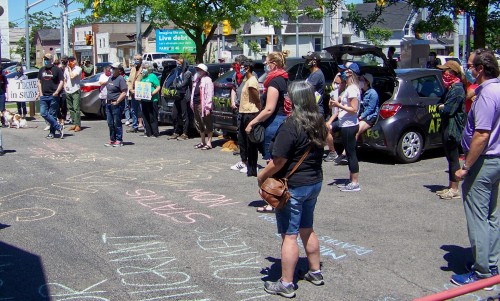 Niagara area residents gather in St. Catharines at a rally in support of migrant workers this June 13th.

For more information on this issue, here is a news release the New Democratic Party of Canada circulated this past June 2nd –

This June 1st, we learned of the first migrant worker death as a result of COVID-19 in Canada. On behalf of all New Democrats, we offer our sincere condolences to his friends, family and loved ones. This young man was in his thirties and came from Mexico. He was here, in the Windsor Essex region, working to help support his family back home while contributing to our agri-food sector.

Canadian food producers and processors rely on these workers, and we all rely on them for the food we put on our tables to feed our families. They deserve to be treated fairly and with dignity.

So far, at least 125 migrant workers at one Ontario farm have tested positive for COVID-19. This is alarming and disturbing. Some migrant workers are living in warehouses with no barriers between each sleeping cot or in crowded communal bunkhouses with no ability to physically distance. No one should have to endure such inhuman housing conditions and risk their lives while trying to support their family. Migrant workers must be afforded their basic human rights including the right to housing which is affirmed in International human rights laws.

For far too long, too little has been done despite numerous reports of abuses and inhuman treatment of migrant workers including inadequate and overcrowded accommodations. Like others, we are angry and frustrated and we want to know what the government has done to ensure the distribution and effective use of the $50 million that they announced in early May to help farmers and agri-food businesses safely welcome temporary foreign workers to be in compliance with the Quarantine Act.

New Democrats have been calling for the government to recognize the rights of migrant workers for years. This pandemic has made their importance to the Canadian economy and to all of us all the more clear. The Agri-Food Immigration Pilot program is a start, but we must honour these workers and the contributions they are making here in Canada. If they are good enough to work, they are good enough to stay. 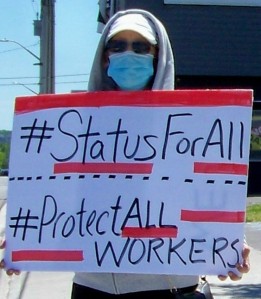 In September of 2016, the TVO program, The Agenda, hosted a panel discussion on the lives of migrant workers in Ontario. You can watch it by clicking on the following link – https://www.tvo.org/video/the-lives-of-migrant-workers

If you would like to watch a documentary film on migrant workers in Ontario, called ‘Migrant Dreams’, click on the following link – https://www.tvo.org/video/documentaries/migrant-dreams-feature-version

For more information about and from the Niagara Migrant Workers Interest Group, click on – https://www.nmwig.ca/site/home