If women are looking for up and coming leaders that can inspire, there sure was one in Niagara for this March 6th’s International Women’s Day.

She is a 15-year-old Indigenous water activist and chief water commissioner of the Anishinabek Nation in Canada and the Great Lakes region, and her name is Autumn Peltier.

Within the past year, she has addressed the United Nations General Assembly and United Nations Climate Summit, and this past January, she participated on a panel with the 17-year-old, world-renown Swedish climate activist Greta Thunberg at the World Economic Summit in Davos-Klosters, Switzerland.

And then here she was this March 6th, in front of an audience of more than 700 mostly women in Niagara Falls, Ontario, at an International Women’s Day event hosted the Greater Niagara Chamber of Commerce.

Autumn Peltier got her inspiration to become an advocate for protecting water before the age of 10 from her great aunt, the now late Josephine Mandamin, who founded the Mother Earth Water Walkers and became known for walking many thousands of miles, carrying a bucket of water around the Great Lakes, to raise awareness about the need to keep our water resources clean and healthy. 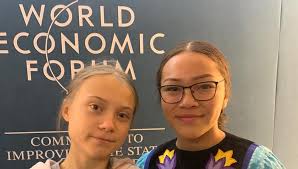 At left, Greta Thunberg, the 17-year-old, world-renown climate activist, with Autumn Peltier at the World Economic Summit in Switzerland this January 2020.

“I was eight years old when I began experiencing what boiled water advisories were,” said Autumn to the Niagara Falls audience, as she spoke of the number of Indigenous communities in Canada where, even in these times of “Reconciliation,” the water coming from kitchen taps still isn’t safe enough to drink.

“I often think that there are children born in Ontario who don’t even know what clean water is from a tap,” she said.

Autumn said she was encouraged by her great aunt to speak out about water issues and one time she made headlines confronting Canada’s prime minister, Justin Trudeau, about her concerns over the lack of action on contaminated tap water and on plans to build pipelines on Indigenous lands.

Like Greta Thunberg, she said she has experienced her share of verbal bullying by some adults who don’t like what she has to say, “but it is something I have learned to overcome.”

“I always have to remember why I am doing this,” she added. “It is my passion. … Children have to be speaking out right now.”

Asked what she would do if she had super powers, Autumn Peltier said she would use those powers “to heal water.”

In the meantime, she said she does what she can “to empower youth to speak up” and she added that when she is older, she wants to be able to tell younger people that she did what she could to speak up for their future.

As this reporter listened to this amazing young person speak, I could not help but think that the big banquet room, located in the heart of Niagara Falls’ tourist district where she was addressing this audience, was less than a 10-minute drive away from a place called Thundering Waters Forest, which hosts provincially significant wetlands near the Niagara River watershed.

As busy as she is, Autumn Peltier may not be aware of the ongoing struggle by residents in this region, including members of the Indigenous community here, to save this piece of our natural heritage from urban development.

If she were made aware, I have no doubt she would be on the side of those fighting to save this place.

Cogeco TV had a camera crew at the Chamber’s Women’s Day event, and for those who are hooked up to Cogeco’s Cable 10 channel, the Autumn Peltier talk will be aired at least once, on this coming Wednesday, March 11th at 7 p.m. (unless we learn otherwise).

In the meantime, if you would like to hear and watch Autumn Peltier on the World Economic Summit panel in Switzerland this January 2020 with Greta Thunberg, click on the screen below –

To read a CBC report on the World Economic Summit this past January 2020 in Davos-Klosters, Switzerland where Autumn Peltier appeared on a panel with Greta Thunberg, click on – https://www.cbc.ca/news/indigenous/autumn-peltier-thunberg-davos-1.5435091

For another report on the same panel appearance at the Switzerland summit, click on – https://www.ctvnews.ca/canada/teen-activist-autumn-peltier-appears-at-davos-with-criticism-for-feds-1.4776782

To read a pieced Niagara At Large posted in the Fall of 2019 on Autumn Peltier, click on – https://niagaraatlarge.com/2019/11/15/a-young-canadian-water-protection-activist-we-should-all-be-proud-of-and-listen-to/