“Until one has loved an animal, a part of one’s soul remains unawakened.” – the late French poet, journalist and novelist Anatole France

A Brief One for the Animals by Doug Draper

If you drive due east from Niagara, Ontario and Buffalo, across the whole 300-some-odd- mile distance of the New York State Thruway, the first town you enter when you cross the border from New York to Massachusetts is West Stockbridge.

Nestled in the picture-perfect Berkshire Hills, this quaint little New England town hosts a population of about 1,600 people and up to March of 2017, one remarkable feline named Felix, known affectionately by town folk as “everyone’s pet cat.”

My wife Mary and I met Felix, or rather he met us, one sunny afternoon in June of 2016 after we stopped to take a short walk through the town before continuing our drive back  home to Niagara after visiting friends on Cape Cod. 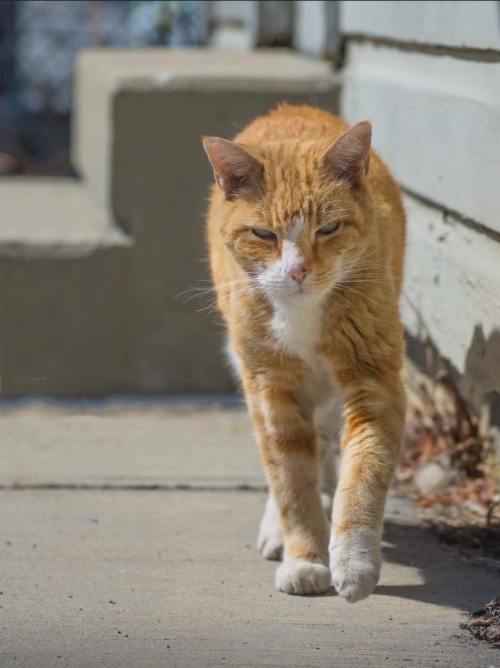 We had just left a nice old bookstore and were about to cross a bridge spanning a river flowing through the town when we looked down and there, walking just a few feet in front of us and looking back from time to time, as if to see if we were still coming, was this yellow-haired cat with long, lanky legs and not much more than a stub for a tail 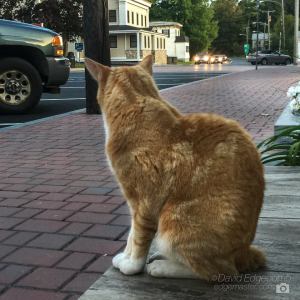 This photo of Felix, looking down the main street of his town of West Stockbridge was posted on social media. He was one remarkable cat.

He kept walking a few paces in front of us as if he was the town’s ambassador, proudly taking us on a tour, and if we stopped for a moment to look in a shop window, he would wait patiently until the three of us would walk on together again. That was the way it was until we arrived at a store on the main street to get some of those great sandwiches we heard they make there for our trip home.

Inside the store, I asked about the cat, and someone said with a big smile; “Oh, you just met our town cat Felix. He loves to show people around.”

The man proceeded to tell me how Felix was first found, many years ago, living in a barn and how everyone in the town came together and looked after him. He would spend his day visiting the office, store or home of one person or another, and as one of the town’s people said later of the mornings he would show up at her place; “It’s my luck day today.” 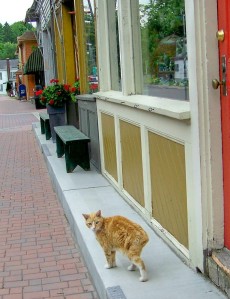 Felix looks back one more time before we got in our car and headed for home. It was the last time we saw him. File photo, 2016, by Doug Draper

We left the store and there was Felix, standing there on the sidewalk outside the door. ‘Hey, Felix, we have to leave now, but we will catch you the next time we come through town,” I said, and off he went, taking one look back as we walked to our car.

We didn’t make another stop in West Stockbridge until 2018 and when I asked about the cat, someone sadly told me that he had died the year before at age 17, and a few months later, people in the town gathered together to remember and share stories about their “faithful friend”.

There was also a Facebook page put together for him that received more than 1,500 hits the first day after his passing and there were numerous entries, including one that read; “I recently enjoyed an extended visit with Felix. He was holding court on the front counter before venturing off to conduct his affairs as the ex-officio “mayor” of our town. What a great character and unique personality! I especially will miss seeing him patrol the sidewalks of our town and being loved (and fed) by all that he encountered.” 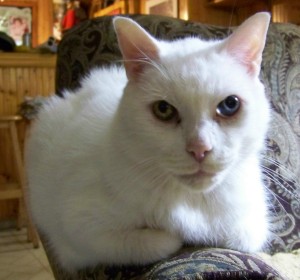 In another entry, someone else recalled how much he had his dog, who had also since passed, “used to love meeting you (Felix)” during their walks. “Now you two can meet again.”

I thought of that remarkable cat from West Stockbridge again this past December as the New Year approached and I was taking a mental inventory of all of the gains and losses of the passing year, including the loss, one shortly after the other, of two wonderful feline friends – Dylan, who had just turned 20, and Dexter, who was 15 – in our home.

Another one of the great ones. Dexter, sunning himself at our back door. Photo by Doug Draper

My wife, daughter and I are still coming to terms with the fact that they are no longer here and I still catch myself waking up in the morning, expecting to see them sitting there, looking right in my eyes, until I realize, in an instant, that they are gone.

I think back on all of the wonderful cats and dogs I have lived with or crossed paths with – Dexter and Dylan and Felix and Woody and Jessica, a gentle giant of a dog named Fawn who lived with our friends at the Old Sea Pines Inn on Cape Cod,  and when I was a kid, my first two canine buddies, a beagle named Jeff and a collie named Jamie – and I can’t help but think how much better I am as a person for having them in my life, if only sometimes (as was the case with Felix) for a few minutes.

One of our good friends from the Old Sea Pines Inn on Cape Cod, Fawn, sitting near the door outside as if he runs the place. Photo by Doug Draper

Mark Twain, who seemed to have a million lines for almost every conceivable subject, once said, and I paraphrase, that ‘if a human could be crossed with a cat, it would improve the human, but deteriorate the cat.’

Sad to say, there may be a good deal of truth in that.

I am forever amazed at these animals and the ancient wisdom they have embodied in side of them. I wonder how much more they could teach us about loyalty and trust and truthfulness and compassion if they could talk, and yet for those who let them in to our lives, they teach us so much already.

I hope that you have been fortunate enough to share some of your time with beings, other than human. The rewards are incalculable.

Make a promise to yourself this New Year to spend at least a little quality time with some other non-human beings, and let’s all promise to be as good as we possibly can to other creatures on this planet, great and small.

Here is wishing us all peace, warmth and companionship in the New York, Doug Draper

“The greatness of a nation and its moral progress can be judged by the way its animals are treated.” ― Mahatma Gandhi 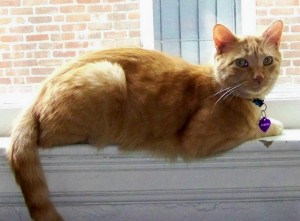 Leo, “the ambassador” at the Red Lions Inn in Stockbridge, Massachusetts, (a few miles down the road from West Stockbridge), for all too short a time. Sadly, he ran out on a busy road on day and that was the end. Photo taken by Doug Draper in 2016

Here is a wonderful story that CBC Radio broadcast this past year about the passing of a wonderful cat named Hamish. To listen to the podcast featuring this story, click on  – https://www.cbc.ca/radio/thesundayedition/a-cat-dies-a-community-is-born-all-hail-sir-hamish-1.4964751

But then at our house, we are very happy to say that we still have Alice – or she has us. Photo by Doug Draper