Ford Tories Ongoing War Against Green, Renewable Sources of Energy is Costing Ontario’s Taxpayers Hundreds of Millions, if not Billions of Dollars

We know which side Ontario’s Ford government supports. What side do you support?

News from Ontario’s Official Opposition New Democratic Party, with a Foreword by Niagara At Large reporter and publisher Doug Draper 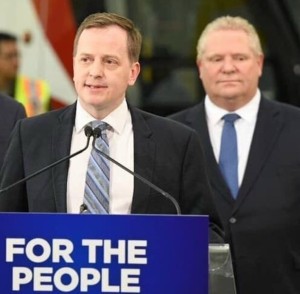 Ontario’s Environment Minister Jeff Yurek, arguably already the worst environment minister the province has ever had (on the right, with his puppetmaster, Ontario Premier Doug Ford, who says he “proud” of killing wind energy projects

Since I began my journalism career covering environmental issues at the St. Catharines Standard 40 years ago, no Ontario government, with the possible exception of that run by Mike Harris and his Tories in the late 1990s and early 2000s, has shown more ignorance of science and more contempt for policies and programs necessary to protect our environment than that of Doug Ford and his so-called Progressive Conservatives.

Whether it has been the need for managing potentially destructive floods and protecting and planting trees or the need to save what is left of endangered species, our provincially significant wetlands or place a price on climate-raving carbon pollution, this Ford government is second to none in Ontario and possibly the country in de-funding and dismantling green programs that have often been decades in the making.

The actions of Doug Ford and every single member of his party who support his war on the environment without ever raising a  word of concern is further evidence that today’s brand of Conservatives in Canada, like their Trumpian Republican counterparts across the border in the United States, and very unlike Conservatives and Republicans generations ago, could care less about protecting the environment, especially when it gets in the way of the short-term money interests of those who bought them into power.

Environmental stewardship is simply not in their DNA and it is one of the reasons why people in our province and people in other regions of Canada and the United States have got to rise up and throw out of office every single politician with a C or PC (for Conservative or Progressive Conservative), or in the case of the U.S., an R (for Republican) behind their name.

In Ontario, we have 18 months before the next provincial election when, for the sake of our future and the future of generations to come, we can throw this anti-environment Ford government out of office.

More on that and on this Ontario government’s deplorable environmental record in the days ahead.

Ford paying to tear down yet another wind farm

Bats aren’t impacted, but that’s Ford’s excuse for paying to rip down projects he doesn’t like

QUEEN’S PARK — The Official Opposition NDP is demanding to know how much Doug Ford’s war on the environment will cost this time, as Ford rips wind turbines out of the ground at the Nation Rise Wind Farm in North Stormont leaving Ontarians on the hook for hundreds of millions of dollars in cancellation costs, yet again.

“Doug Ford declared his war on the environment the moment he became premier, and it is Ontarians who are paying the price with a government that is ignoring the climate crisis and costing taxpayers hundreds of millions of dollars to not build renewable energy,” said MPP Peter Tabuns, the NDP’s Energy and Climate Crisis critic.

“First he ripped down the White Pines wind farm project at a cost of at least $141 million, and now he’s scrapping the Nation Rise Wind Farm — it’s bigger, it was further along in its construction, and it’s likely to be even more expensive to rip it down. Doug Ford needs to come clean about how much this will cost taxpayers,”

“Even the local Conservative MPP Jim McDonell has said this action would be as bad as the Liberals cancelling the gas plants.”

The excuse provided by Environment Minister Jeff Yurek in his decision letter on the project claimed that it would do “serious and irreversible” harm to bat populations, a claim that is not supported by the evidence. The Environmental Tribunal concluded there was no reason to block the project on the grounds of impact on bats. Yurek disagreed, providing no evidence to back himself up.

“Ford’s flimsy excuse for tearing the renewable energy infrastructure down is that the windmills impact the local bat population — which scientific studies and bat experts say is not true, and the government knows it,” said Ian Arthur MPP, the NDP’s Environment critic.

“For Yurek and Ford to make stuff up to justify their war on the environment is disturbing.”

The Auditor General revealed that the Ford government has wasted $231 million to cancel 751 cancelled projects, including an estimated $141 million to cover the cost of terminating the White Pines project in Prince Edward County. The Nation Rise Wind Farm was due to be completed in less than three months’ time, and Yurek’s decision means 230 construction workers will now be laid off.

Read and watch more on the Ontario Ford government’s reprehensible record on climate and environmental protection, by clicking – 091https://www.huffingtonpost.ca/entry/jeff-yurek-silent-climate-change_ca_5de966ebe4b3e6f8d5760 .

For More News And Commentary From Niagara At Large – An independent, alternative voice for our greater bi-national Niagara Region – become a regular visitor and subscriber to NAL at www.niagaraatlarge.com