At this special meeting of Niagara Regional Council, councillors voted to call for police investigation into circumstances around CAO hiring affair. Photo by Doug Draper

A News Commentary by Doug Draper, reporter and publisher of Niagara At Large 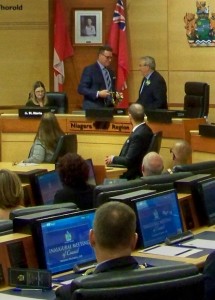 A year ago this December 6th, Al Caslin, standing at back and at left, performs his final act as Niagara’s regional chair and hands the chain of office over to Niagara Region’s new Chair, Jim Bradley, and the culture in the regional council chambers turned from black to white, just like that. File photo by Doug Draper

Niagara, Ontario – It was a year ago on this day – December 6th, 2018 – that Niagara’s new regional council was sworn in, and Jim Bradley, the former veteran MPP for St. Catharines, was elected by a majority on that newly sworn-in council to serve as Niagara Region’s new Chair.

It was an inauguration day like no other in Niagara Region’s 50-year history, if for nothing more than the sheer number of new faces taking the oath of office.

Only nine of the 32 of the individuals sworn in that day had served on regional council during the last term, and with the exception of Niagara Falls’ Barbara Greenwood, who had sat on the council a few terms ago, 22 had never served on council at the regional level before.

It made for an unprecedented number of newcomers at the regional level following October 2018 municipal election that saw an equally unprecedented drive by citizens across Niagara for sweeping change on the Region’s council after four years of a council, dominated by then regional chair Al Caslin and what came to be known as a “cabal” of a dozen or more councillors, that felt like a trip through Dante’s inferno for many people.

So the new council was sworn in with a gallery packed with people filled with hope that some semblance of decency, trust and respect for people and the way public institutions should work in a democracy, would be restored. 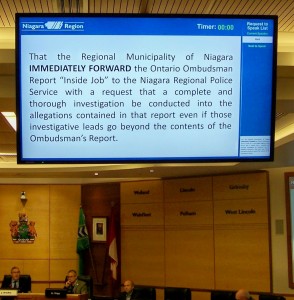 The motion for a police investigation, displayed on the screen in Niagara Regional Council chambers. It is likely the case will ultimately be turned over to Ontario Provincial Police.

This December 5th, at a special meeting of Niagara’s regional council chaired by Jim Bradley, all 25 councillors attending the meeting at the time fulfilled that hope in spades when they voted in favour of turning a recently released Ontario Ombudsman’s report on the sordid circumstances around the hiring three years ago of former regional CAO Carmen D’Angelo over to police for further investigation.

The passage of that motion and another, asking lawyers to determine if there is any legal recourse the Region can pursue around contracts it signed with individuals linked to the CAO hiring affair, drew  round of applause and choruses of “thank you” from citizens in the gallery.

The meeting also featured some words from regional councillors worth repeating here because they say a great deal about how dark and disturbing times were at the Region under the watch of then region chair Al Caslin and CAO Carmen D’Angelo.

Here is a sample of what some of the councillors shared – 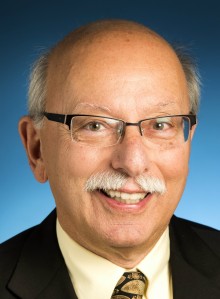 From St. Catharines regional councillor Brian Heit, one of the councillors from the last term who was re-elected in October of 2018 and one of a handful on the last council who voted against hiring D’Angelo to the CAO’s job;

“This started in 2010 (four years before Caslin became chair),” said Heit, “the regional council cabal, and it continued with the recruitment of more like-minded individuals in 2014.”

“Coming up here (to Niagara’s regional council chambers in Thorold),” added Heit, “was like coming to a gun fight and we brought knives, some of us. It was not fun times.”

“Hopefully, we can get some answers,” Heit said of the council’s call for and the need for a police investigation. “Who benefited the most? Who owed who favours? Who had what on who? Who was the puppet master over what took place over the last eight years around here? And as Tom Insinna (a first term Niagara regional councillor from Fort Erie and veteran RCMP officer) keeps saying; ‘Follow the money’. Obviously that’s a concern of some of us around here.”

“Years ago as I watched ‘House of Cards’ (an American TV series that deals with politicians in Washington and, according to a Wikipedia description, “with themes of ruthless pragmatism, manipulation, betrayal and power”), I wondered if these people (the co-called cabal on Niagara’s regional council were watching that show,” Heit said.

Later in the meeting, after Heit detailed what appeared to be backroom manoeuvres (later confirmed in the Ontario Ombudsman report) by members of that cabal and by some now former senior staffers at the Region to set the stage for D’Angelo to get the CAO’s job.

The manoeuvring went on even though, in Heit’s view, there was at least one other “solid individual” – a  former commissioner at the Region – he believed should have got the job but was not even granted an opportunity to be interviewed for it.

Heit then recounted the time that he it, he and another regional councillor (Kelly Edgar) were sued (the suit later fell flat in a provincial court) for trying to circulate information to fellow councillors before D’Angelo was hired, that might inspire them to reconsider D’Angelo’s name being put forward as the preferred candidate for the job.

Referring back to steps reportedly being taken behind the scenes to keep the former commissioner from receiving any further consideration, Heit said; “This is a solid individual that could have been the CAO of Niagara and he is being ignored. “Obviously (someone) didn’t want the individual here because he couldn’t be controlled.”

“I get emotional over this because I got sued,” said Heit as his eyes turned wet and he ended his comments at the December 5th meeting by responding to something the Ombudsman, Paul Dube, attributed to  D’Angelo in his report.

“The nerve of Carmen D’angelo to say this (matters related to the CAO hiring affair) doesn’t demonstrate any harm to the region.” 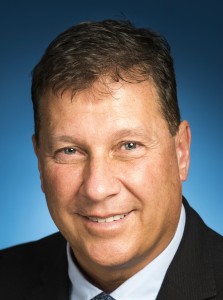 “Just a quick comment, Mr. Chair,” began Chiocchio. “I know, as Councillor Heit stated (that) over the last few years it has been difficult to deal with some of the issues that were taking place around this table. …”

“But even for myself, as a regional employee while all of this was taking place, it was affecting the staff as well,” he said.

“I am glad this motion is before us today,” added Chiocchio of the motion to refer the CAO hiring affair to the police. “I will be supporting it 100 per cent.” 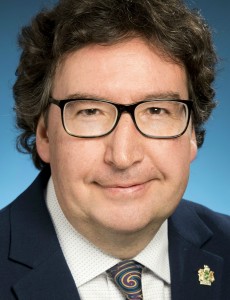 Then Niagara-on-the-Lake Regional Councillor Gary Zalepo, echoing what many of his fellow councillors were saying to citizens across the region in the days since the Ontario Ombudsman’s report, titled “Inside Job,” was released on November 29th.

“I am definitely very in favour of this motion,” Zalepo said. “I am sitting here in this chair because during (October 2018 municipal) election, people were asking me why do you want to run for the position.”

“I said it was about restoring honesty, integrity and bringing good faith back to government in the region of Niagara and I really feel that is what we are doing with this motion.” 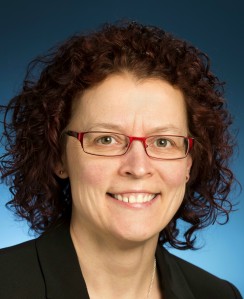 “I had run for council a few times before this (October, 2018) campaign, (and) in previous elections we were able to talk about (other) issues. …”

“In this past campaign it was very much about being honest, ethical people. So hopefully, between this motion (to seek legal recourse on contracts) and the last motion (calling for a police investigation), we are able to say to the public that they are in good hands with this council.”

Pelham Regional Council Diana Huson (also serving her first term) summed up the outcome of the meeting this way;

“We are custodians of the public trust (and) I think we showed great leadership in doing this today,” she said of the motions the council passed.

“It is not good enough to have good policies,” Huson added. “We have to have quality people around this table (and) I want to thank council for doing the right thing today, and I want to thank members of council and staff and members of the public … for asking us to uphold the integrity of our institutions.” 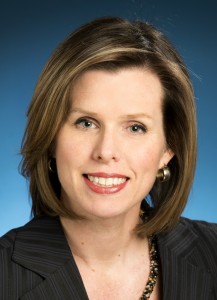 And with all of the other important issues facing Niagara and the regional council as it begins the second year of a four-year term, Huson finished by sharing a wish many have that the current group of councillors will move on “and show the public what regional council is supposed to look like for the next few years.”

And certainly this December 5th was a stellar display of how a government by the people and for the people should behave when there is reason to believe that the integrity of our institutions have been compromised and abused for interests that have little or nothing to do with the greater public good.

We may not agree with everything this Niagara regional council has done during the first year of its term, and we will quite likely have our differences with some of the decisions it makes in the future.

We will have our difference, alright, and that is the way it always will be.

The important point here is this.

What a world of difference between the level of civility and decency and respect shown by this regional council, chaired by Jim Bradley, so far, compared to the ugly, unwelcome mess we faced in the four years before this council was sworn in.

For the sake of everyone who lives and works in Niagara, let’s hope it now stays that way.

Citizens from across Niagara, in regional council chambers, waiting for decision on turning findings on CAO hiring affair over to police. Photo by Doug Draper

To watch the December 5th, 2019 special meeting of Niagara regional council on what to do next with the findings in the Ontario Ombudsman report on the CAO hiring affair, click on –https://www.youtube.com/embed/JSFCEj_MkH8?start=7338&end=9208 .