You Are Invited to an Indigenous Rights Conference

On Saturday, November 16th, 2019 from 9 a.m. to 8 p.m. at Brock University’s Marilyn I.Walker School of the Fine and Performing Arts in downtown St. Catharines, Ontario

St Catharines, Ontario – The Supporters of Haudenosaunee Right to Hunt are pleased to release the schedule for their upcoming Indigenous Rights Conference (in St. Catharines/Niagara). 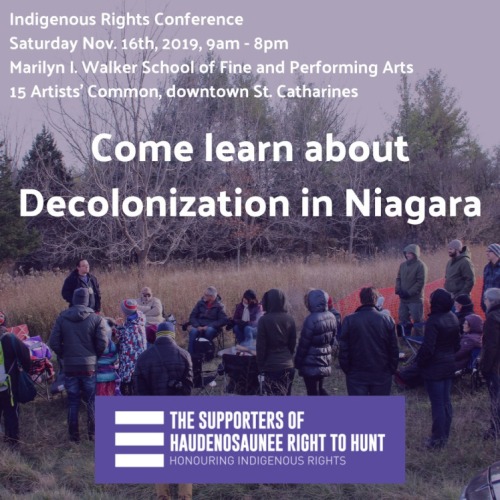 It will be held Saturday November 16, 2019 from 9:00 am until 8:00 pm. at Brock University’s Marilyn I. Walker School of Fine and Performing Arts, 15 Artists’ Common, downtown St. Catharines in Niagara, Ontario.

“By having our rights recognized and respected shows the Two Row Collaboration in action! There is a positive Indigenous momentum happening in Niagara. Celeste and Jodielynn [Co-Founders of The Supporters of Haudenosaunee Right to Hunt] are true warriors set on a mission to education the public of our inherent right to hunt and what it means to our peoples and our future generations.”

All community members are welcome to attend the conference: Indigenous andnon-Indigenous people, regardless of their position on the hunt.

The full conference schedule can be found athttps://sixnationsrighttohunt.com/

Thank you to our partners:

The Indigenous Rights Conference is affirmed by the Haudenosaunee Wildlifeand Habitat Authority.

The HWHA, which organizes the harvest at Short Hills Provincial Park, is adepartment tasked by the Haudenosaunee Confederacy Chiefs Council with themanagement of wildlife resources.

One response to “You Are Invited to an Indigenous Rights Conference”