While water levels remain high, and are still above average, City officials say there is enough usable space on the beach to safely reopen it for use

Niagara, Ontario – St. Catharines residents will be able to enjoy a trip to the beach at Lakeside Park before summer vacation wraps up. 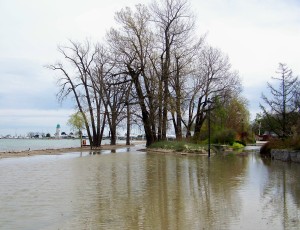 How the beach at Lakeside Park in Port Dalhousie looked early this past June when water levels in Lake Ontario were reaching near-record highs. File photo by Doug Draper

The beach at the park, which has suffered flooding due to record high water levels on Lake Ontario since May, will reopen to the public on Friday, Aug. 16. While water levels remain high, and are still above average, City officials say there is enough usable space on the beach to safely reopen it for use.

“As the water levels have started to recede, our staff have been hard at work cleaning and grooming the beach,” said Darrell Smith, director of Municipal Works. “As long as the weather cooperates, and the water levels continue to decline, we could see even more space available for use before the beach season ends.”

While the beach will open for visitors to soak up the sun, the City is warning residents to heed the water quality results posted at the beach. Beach goers can visit niagararegion.ca/beaches for updates and current beach water testing results.

The reopening of the beach is another step in returning park operations to normal. Amenities affected by the flooding have been reopened over the past several weeks, including the washrooms, snack bar and Lakeside Park Carousel. The east pier, however, remains closed due to the water levels.

Visitors to Lakeside Park are reminded to look for new wayfinding signs to assist with finding available parking. Construction for a Lakeport Road development project has led to a temporary closure of the City’s Lock Point parking lot. Construction crews working on rehabilitating the Port Dalhousie piers are also using a section of the Lakeside Park parking to store materials and equipment.

Another look at the beach in Lakeside Park this past June. The water has receded enough that the beach is finally opening to the public this August 16th. file photo by Doug Draper

Visitors can also use St. Catharines Transit to get to the park. The weekday 301 and evening and weekend 401 buses stop at Lock Street and Main Street, just a short walk from Lakeside Park.