A Message from Conservation Ontario

A Brief Foreword by Doug Draper, Niagara At Large

One of the more frequent pieces of news I heard on CBC Radio coming into this rain-soaked Easter weekend was broadcast with the heading; “Ontario’s Conservation Authorities on flood alert.”

Flooding waters from near-record rainfalls in the spring of 2017 covered swampedf Lakeside Park and the outer Port Dalhousie Harbour area in St. Catharines, Ontario, resulting in hundreds of thousands of dollars of damage and cleanup costs. File photo by Doug Draper

This news came just days after reports circulated across the province that the budget Ontario’s Ford government tabled this past April 11th included up to 50 per cent cuts in transfer payments to the Niagara Peninsula Conservation Authority and 35 other Conservation Authorities in Ontario for delivering core services that include, at or near the top of the list, flood management.

One finds it hard to imagine what logic – economic or otherwise – Premier Doug Ford, his cabinet and his caucus of MPPs that includes Niagara West MPP Sam Oosterhoff, used to make this cut.

The damage to persons and property from flooding waters in Ontario cuts can easily run into the billions of dollars each year.

Just to recall a couple of local examples, the almost record high amounts of rain that fell over our region and others in Ontario – 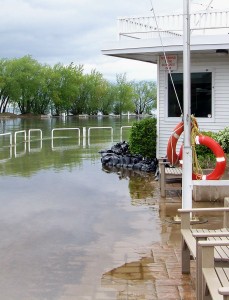 In the spring of 2017, the City of St. Catharines’ Lakeside Park and Port Dalhousie Harbour area flooded for weeks, with sandbags surrounding the historic carousel ride in the park and some of the buildings in the harbour area in an effort to prevent serious damage. That one episode alone cost the city hundreds of thousands of dollars.

In the summer of 2014, a flash downpour of rain did  hundreds of millions of dollars of damage to business and residential properties in the Niagara region alone, destroying basements and  belongings that, in some cases, were irreplaceable, of residents in St. Catharines, Thorold, Niagara Falls and other municipalities.

Companies that sell property insurance know how costly the damage from flooding water can be. And it is one of the reasons why the cost of property insurance has risen so high, and why so many companies try to find ways out of insuring property owners for flooding.

The amount the Ontario government will save by cutting the funding to Conservation Authorities for flood management is a pittance by comparison.

In the case of the Niagara Peninsula Conservation Authority, the cut amounts to about $90,000 a year that will probably now have to be made up by area municipalities through money they collect in property taxes. The actual dollar amounts may be higher for at least some of the other 35 Conservation Authorities that serve larger areas of the province.

But it is hard to believe that the total saving from this cut would come close to $10 million for the entire province.

It is tragic enough that we find out the budget also cuts funding to libraries in rural areas of the province where libraries may be even more important to families because there are many rural areas that have a hard time getting access to high-speed internet. It is hard to put a dollar value on that.

But flood damage is something you can put a dollar value on. And cutting funding for a service that can help alert people and prevent damage that can run into the billions of dollars, just to say you cut such a small amount of funding not only makes no sense. It makes no dollars and sense.

Now here is the open message Conservation Ontario is making to Ontario’s Ford government to give cutting that funding a second thought. –

Recent deep cuts to provincial natural hazards transfer payments to Ontario’s 36 conservation authorities were extremely disappointing, but not unexpected. The government was very clear ahead of time about its mission to reduce the deficit and create efficiencies.

Conservation authorities’ flood operations protect public health and safety. Flooding threatens people, their homes and their livelihoods. It costs all levels of government millions of dollars each year in damages – and that’s with a long-standing flood management program that is backed by strong watershed planning and programs. We’ve seen what is happening in other parts of Canada where there are no conservation authorities and little or late efforts to keep people from building in floodplains.

So, it’s somewhat surprising that the Province would reduce transfer payments by 50% to such an underfunded, yet critical public safety program.

Conservation authorities have been delivering successful flood management operations on frugal budgets for over 20 years. Provincial funding levels for this work have remained the same for more than 20 years. Until these reductions, it was $7.4 million per year and shared by all 36 CAs. The Province has also been providing an additional $5 million each year which is matched by municipalities and used to address the most extreme issues and major maintenance needs in aging flood infrastructure (dams, dykes etc). It’s not really enough, yet each year, conservation authorities pulled their belts a little tighter and continued to provide a solid level of service.

The provincial Made-in-Ontario Environmental Plan has many good elements and recognizes the contribution that conservation authorities make to a healthy and safe environment.

It states that the Province will continue to protect and identify vulnerable waterways and inland waters and ensure sustainable water use and water security for future generations. 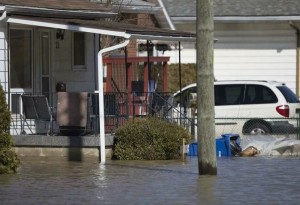 The Plan says the Province will work in collaboration with municipalities and stakeholders to ‘ensure that CAs focus and deliver on their core mandate of protecting people and property from flooding and other natural hazards, and conserving natural resources’.  It’s unclear how provincial objectives to reduce flooding, protect water and adapt to climate change can be accomplished by reducing provincial funding support for the natural hazard program.

Protecting people from flooding requires us to conserve natural resources. A cornerstone of a successful flood program is ‘prevention’.

Through their watershed planning, programs and services, conservation authorities put as much effort into preventing flooding as they do addressing them when they happen.

Some of these activities include:

As a result, the impacts and costs of flooding are reduced, people are protected and we’re able to track and adapt to climate change. We’re protecting water and land resources for future generations.

We think that’s worth a sober second thought about future support for conservation authorities.

For more information click on the author for the above message: Conservation Ontario

To watch a CHCH TVreport on the disastrous amount of damage flooding did to homes and businesses in the Niagara area due to a flash rainstorm, click on the following link – https://www.chch.com/st-catharines-residents-face-hefty-damages-flood/

To read a recent post in Niagara At Large on the Ford government cut to the Niagara Peninsula Conservation Authority, click on – https://niagaraatlarge.com/2019/04/18/ford-government-has-almost-halved-its-share-of-funding-to-niagaras-conservation-authority/ .