A Commentary by Linda McKellar, a Niagara, Ontario resident and retired hospital nurse 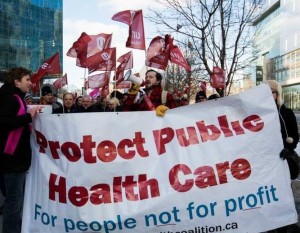 (The following commentary by retired nurse Linda McKellar has been shared with Niagara At Large in the wake of news late this February that Ontario’s Ford government is moving forward with plans to merge health services in the province under one umbrella where some health experts fear publicly funded services will give way to an array of privately funded services already up and operating in Ontario.

The end result of such a mega merger, critics fear, is ever more privatization and a possible end to publicly funded, universal health care as we known it in Ontario and Canada for more than half a century.)

The attempt to privatize health care services in Ontario has been going on for years, primarily by Conservative governments which have always been pro-business and privatization, but contributed to by both ruling parties to some degree.

It has had lousy results.

Outsourcing food supplies – horrible meals, petrified sandwiches, all pre-packaged and sent from someplace – from China for all we know. Maybe surplus airplane meals.

When people are ill, nutrition is vital. Many people are hospitalized precisely because they need specific diets related to their conditions. Now many meals are as appetizing as a piece of cardboard.

The same with housekeeping.

Cleaners often are not adequately knowledgeable about isolation and disinfection procedures. Staff is cut so they are overworked; all to save money, resulting in slap dab attention to important details, dirty rooms and equipment.

Patients and families have noted dirt and debris in their rooms that remained undisturbed for days. The C-difficile outbreak a couple of years ago resulted in terrible illnesses for many patients and probably contributed to some patient deaths.

Even parking is outsourced and goes to private agencies.

At the new hospital in St Catharines I have driven around the parking lot for a half hour a couple of times making me late for appointments. Drivers prowl the lot and stalk people they see who might be leaving. Great planning.

Where else do people pay hundreds of dollars annually just to go to work? I know an employee who paid to park at a local mall because they couldn’t find a space. 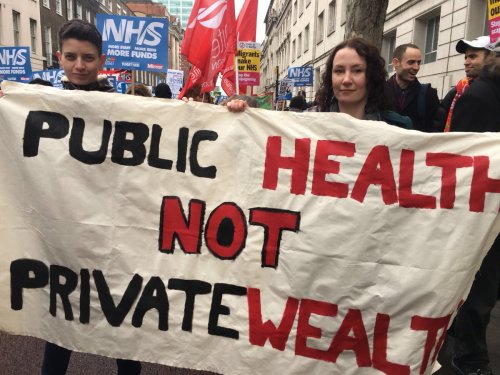 The government wants to create some kind of super bureaucracy to organize everything. The problem is there is already too much bureaucracy.

Bureaucracy costs money. This new agency is to “coordinate and oversee everything”.

Isn’t that what the Ministry of Health is supposed to be doing? Do we need another agency? More duplication, more pencil pushers and more waste?

When I started nursing we didn’t have all of those layers of administration and you know what? It worked just great. Care was also more personalized because staff actually had time to CARE for patients and it cost less. Staff actually enjoyed going to work and that was reflected in the care people received.

I called hospital occupants “PATIENTS”. Now they are to be called “CLIENTS”. 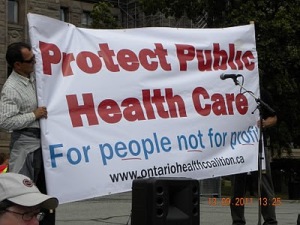 Another example, in my opinion, of depersonalizing those who need our care and equating health care with a business. People aren’t products and it’s not an industry. Medicine is a unique calling.

Insurance companies have been trying to get their foot in the door since day one of Tommy Douglas’s creation (more than 50 years ago).

If you look back at the history of universal health care in Canada, insurance companies spread phony propaganda like manure. They still do. I think it incredibly naive to believe politicians don’t have something to gain from supporting privatization.

What do insurance companies do? Make money for investors. They never touch a patient. In Canada we eliminate the middle man, the insurance companies. The difference between our system and the U.S. is wholesale vs. retail – the same product – lower cost. Which is more economical? Canada spends @ 12-13% of its GDP on health care.

The U.S. spends @16% and leaves over 20 million under or uninsured. Their health care status on a global scale ranks them 37th. Won’t it be wonderful when we have a private insurance health care system like the US where 42% of all bankruptcies are due to medical bills? More than disasters, careless spending and job loss. Something to strive for.

A lot of people complain about waits, a perceived lack of respect, grumpy overworked staff and hallway medicine. Instead of complaining, look at the causes and do something about it.

Can the system be improved? Of course, but don’t throw the baby out with the bath water.

Universal health care is our baby and we must care for and nurture it.

Linda McKellar is a Niagara, Ontario resident and retired nurse who remains a strong advocate for quality, universal health care. She is also an avid follower of public affairs who frequently shares here views on Niagara At Large.

The Ontario Health Coalition, a province-wide citizens network that advocates for quality, public health care, is planning town hall meetings across Ontario leading into a mass rally on April 30 at noon outside the Legislature. They are calling on the Ford government to hold public hearings on the new omnibus health care restructuring bill.

Stay tuned to Niagara At Large for details on times and locations of those town hall meetings, when they are available

You can visit the Ontario Health Coalition’s site for more on this and other health-related issues by clicking on – https://www.ontariohealthcoalition.ca/ .