“When it comes to NATO, Canada has always pulled its weight. Our engagement in NATO has only expanded over the years, and with good reason: it reflects Canadian values, and is essential in preserving the rules-based international order.” – Canadian Prime Minister Justin Trudeau

News from the Office of Canada’s Prime Minister

The Prime Minister, Justin Trudeau, concluded (this July 12th) his participation at this year’s NATO Summit in Brussels, Belgium, where he announced increased support for NATO. These contributions underscore Canada’s commitment to play an active role in the Alliance and advance international peace, security, and stability. 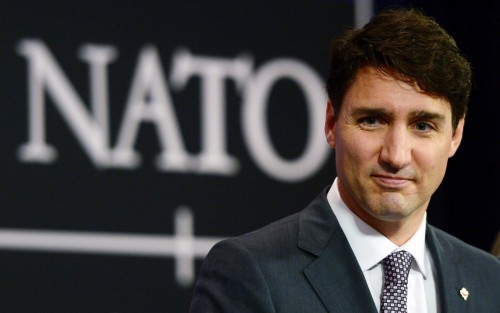 While in Latvia earlier this week, the Prime Minister announced Canada will extend its contribution to NATO’s enhanced Forward Presence through Operation REASSURANCE for another four years and increase the number of personnel taking part in this mission from 455 to 540.

At the Summit, the Prime Minister outlined several other leadership roles Canada will undertake as an active and key partner within NATO. Our country will provide up to 25 personnel within the next five years to NATO’s Airborne Warning and Control System program. This contribution represents Canada’s return to the program since pulling out progressively during the 2012-14 period.

We will also contribute to the new NATO Command Structure and support the new United States Readiness Initiative. Canada is now a member of the European Centre of Excellence for Countering Hybrid Threats and will join the Cooperative Cyber Defence Centre of Excellence.

Prime Minister Trudeau also announced yesterday that Canada will assume command of a new NATO training and capacity building mission in Iraq for its first year. This is the next natural step for Canada, as we move forward from a successful fight against Daesh to helping Iraq transition into a country of long-lasting peace and security. 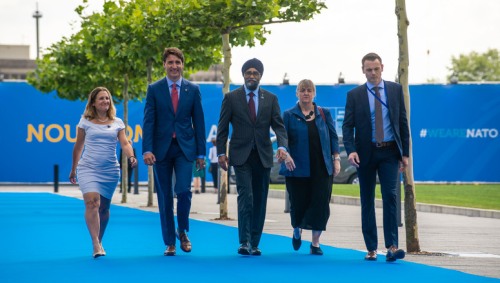 Arrival Justin Trudeau ,Prime Minister of Canada, and his team at NATO meetings this July 11th.

Canada, the largest contributor to NATO’s Women, Peace, and Security Office, will also provide $26.7 million to improve women and girls’ livelihoods in Iraq and Syria, as announced today by Canada’s Foreign Affairs Minister, Chrystia Freeland, at the Foreign Ministers’

Meeting of the Coalition Against Daesh in Brussels. Gender equality and the empowerment of women and girls are essential to building real and lasting peace in both countries. We will continue to support efforts to modernize the Alliance and advance its women, peace, and security agenda.

During the Summit, the Prime Minister also took part in the North Atlantic Council, the principal decision-making body within NATO that encourages collaboration on policy and operational issues related to matters of security that affect the whole Alliance.

On the margins of the Summit, the Prime Minister met with several NATO allies and partners.

“When it comes to NATO, Canada has always pulled its weight. Our engagement in NATO has only expanded over the years, and with good reason: it reflects Canadian values, and is essential in preserving the rules-based international order. We will continue to step up and work together with our Allies to build a safer, more peaceful world for our citizens and people around the world.”
—The Rt. Hon. Justin Trudeau, Prime Minister of Canada

“We are pleased to make a new commitment to the Airborne Warning and Control System program after the previous government withdrew. This demonstrates Canada’s strong commitment to the Alliance and to peace and security around the world.”
—The Rt. Hon. Justin Trudeau, Prime Minister of Canada

A Brief Footnote from Doug Draper, from the perspective of a Canadian citizens who has long felt friendly toward the United States – 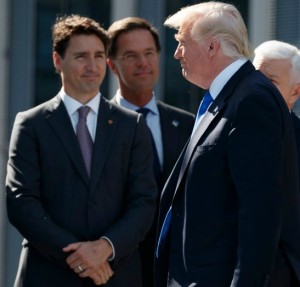 Trump casts an ugly shadow at this July’s NATO meetings.

Following the child tantrum-like antics of America’s reality show president Donald Trump in the media lately, most specifically around his hostile and insulting remarks toward Canada and other long-time western allies and members of the North Atlantic Treaty Organization (NATO), I found myself joining many fellow Canadians in expressing an anger toward the United States I have usually cautioned against.

I have never been a fan of America bashing, but what gives with Trump and all of the millions of supporters cheering him on, slamming Canada as some kind of “freeloader” while making so nice with the likes of Putin and a rogue’s gallery of some of the most corrupt and murderous dictators on the planet?

What gives some ignorant nut job who is a serial draft dodger from the Vietnam War era telling Canada and other countries that we should be spending more money we should be investing in education, health care and environmental protection on weapons of war and mass destruction?

If Justin Trudeau told Trump to ‘go fuddle-duddle’, to borrow the words his father once fell back on to mask his use of the f-bomb, what reasonable person in the world would blame him? But something stops Trudeau and other European leaders from responding to Trump’s bile with language like that. It is called civility and class.

I wonder how many Americans are proud of their president’s behaviour and at how dutifully he is going about ripping at the their country’s long-time western allies for his puppet master in Moscow.

When are enough Americans going to wake up and ditch this clown? The land of Abe Lincoln, FDR and JFK can do so much better than this!