Is Ontario Going Back To The Mike Harris Years Of Filth & Disrepair In Our Public Schools?

A Commentary by Niagara At Large reporter and publisher Doug Draper, followed by a Statement from the Ontario New Democratic Party On New Cuts to the Province’s Schools

Ontario’s PC Premier Doug Ford drew a lot of his support from seniors, including aging Baby Boomers, during his recent election campaign on a promise of tax and spending cuts.

With all of those tax cuts Ontario’s new premier Doug Ford promised during this spring’s election, we had to know that cuts to services must be made to pay for them – and those cuts are already coming fast and furious.

And there seems to be a disturbing pattern here.

Most of the cuts are so far happening to health care, education and other programs that impact on younger families and their children, and that hardly seems care.

Scraping Ontario’s cap and trade program on climate-changing carbon emissions, with a word of anything else the Ford Tories would do to address climate change, is also something that could have serious consequences for younger people long after those of us over the age of 60 are gone.

This July 9th, yet another Ford government cut was reported – this one in the form of $100 million slashed from the province’s budget to keep public schools in repair.

We’re talking about schools that have been slowly but surely falling apart going back to days in the 1990s when one of Ford’s Tory mentors – then Ontario premier Mike Harris –axed the province’s education budget to a point where parents and teachers began complaining about how unclean, not to mention how undersupplied in books and other resources, schools were for the kids.

How fair are all the cuts to programs for younger Ontarians when results from the recent provincial election appear to show that a disproportionate number of seniors, including aging Baby Boomers, voted for Ford and his Tories?

How fair are all the cuts to programs for younger Ontarians when one of the single largest drains on the province’s budget is health care for seniors?

If Ford and his older supporters want to ignite a war between the generations, they are getting off to a pretty good start.

Don’t get me wrong.

I am a member of the Baby Boomer generation myself and I don’t want to see cuts to health care, education or other essential services for any age group in our province. That’s why I did not vote for Ford.

Yet if cuts to programs are going to happen under this new Ford government, shouldn’t every age group share in the pain? 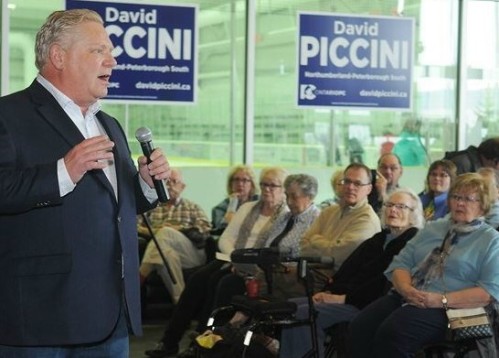 How many of Doug Ford’s older supporters will be willing accept cuts to health care as a way of sharing the burden?

Indeed, those who willingly voted for Ford because they wanted to see significant cuts to their taxes should be the first to accept some sacrifices to help pay for those cuts. 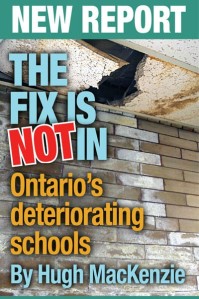 Economist Hugh_Mackenzie’s-2017 report on Ontario’s deteriorating schools was a warning bell for much needed action.

“Ontario has a $16-billion school repair backlog. Kids finished the school year in sweltering classrooms, and by winter, they’ll be wearing their coats and mittens at their desks. There are water fountains that aren’t safe to drink from and roofs that need to be replaced.

Doug Ford’s cut to school repair funding will take the condition of Ontario’s schools and classrooms from bad to worse.

It’s sad that there is no hope coming for kids and educators, and absolutely disgusting that our children’s classrooms are one of the first places Doug Ford’s axe is falling. Ontario’s students need more opportunity and resources — not less.”

5 responses to “Is Ontario Going Back To The Mike Harris Years Of Filth & Disrepair In Our Public Schools?”