A Commentary by Draper, veteran environment writer/publisher, Niagara At Large

Niagara Region – Are local environmental groups and members of Niagara’s Indigenous communities responsible for stalling a $1.5 billion development project some of the region’s municipal politicians say could draw millions of visitors and thousands of jobs to the Niagara area? 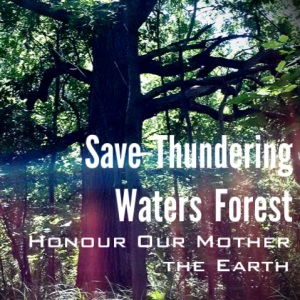 Are scientists working for Ontario’s Ministry of Natural Resources and Forestry doing anything that could place the future for this big ticket project proposed for a 484 acre tract of land known to many as the Thundering Waters Forest in Niagara Falls in jeopardy?

To read a story about the Thundering Waters issue in the July 26th edition of Canada’s national newspaper – The Globe and Mail – one might come to that conclusion.

And it is a conclusion that would not only be wrong, but would also do  a disservice to the many Indigenous and non-Indigenous citizens in the region who are raising concerns about the fate of the forest and the provincial significant wetlands (PSWs) beneath its canopy.

Members of Niagara’s Indigenous communities gather to save Thundering Waters from urban development.

It also does a disservice to the ministry scientists who are only doing their job according to the rules on the books for reviewing development proposals in this province.

Not that the Globe story offered an explanation from anyone in the province’s Ministry of Natural Resources and Forestry of the role its scientists have played to date in the Thundering Waters development project.

What we are treated to, instead, is a picture of ministry scientists going in, according to Jim Diodati, Niagara Falls’ mayor  and perhaps the biggest local booster of the project, and ‘unfairly changing the rules of the game’ – after  a China-government owned investment company – GR Canada – had already spent more than $22 million purchasing the land (about 25 times more than documents show it was purchased for 10 years earlier, in 2005), by a previous owner) and after it had already gone to the time and expense of drawing up detailed plans for residential and commercial development on the land.

Check out the following excerpt from the Globe story, keeping in mind that some parties have informed me that the acreage figures the reporter used in the story don’t match those in documents they have reviewed –

“At the time GR (CAN) bought the land,” reads the story, “201 acres of the total 484-acre property in an area known as Thundering Waters were designated as provincially significant wetlands. However, scientists from the Ministry of Natural Resources and Forestry increased the total protected wetlands to 235 acres last fall. Additional land is required for setbacks, or buffer zones, around the swampy areas, which are spread throughout the parcel of land.

Mr. Diodati said the move was unfair and the additional wetlands designation should not be allowed to stand.

“The rules are changing as the game is being played out,” he told The Globe and Mail in an interview. “We’re frustrated because it sends a very mixed message to the development community and specifically when we’re trying to bring in international investment.”

The story goes on to quote Cynthia Lai, a Toronto area real estate agent working with GR, saying that if issues around acreage and provincially significant wetlands no longer make the development project economically viable, “then somebody needs to buy all those lands … to be fair, don’t you think.” 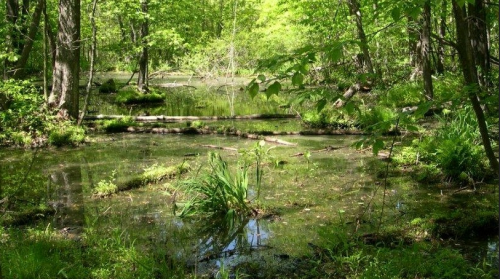 Wetlands under the canopy of Thundering Waters Forest

Well, here are a few thoughts I will share now.

From the get go, and I have been attending public meetings on this project for going on a year and a half now, members of the public have been informed that GR had some good environmental consultants on its team. In fact, one of its principle people had years of experience working on environmental projects involving wetlands in China.

So before GR spent all of that money on this land, how close a look did it take at what was on that land? How much time did it take studying the rules and policies in Ontario with respect to building on or around wetlands and other ecologically significant features?

I’m talking about something like taking a used car out for some test drives and having mechanics you trust giving it a thorough look over before you buy it.

Is there any chance the GR people were told by other parities in this region or province that even with all of the wetlands and trees, ways could be found to accomplish what they want to do on that land?

Earlier in the game, for example, the Niagara Peninsula Conservation Authority was floating something called “biodiversity offsetting” that would involve constructing or growing wetlands somewhere else to make up for ones that might be paved over, but GR took that idea off the table after a storm of public protest and doubt that it would ever work with wetlands of the type in Thundering Waters, that are far from the can-be-easily-replaced-in-a-few-years kind.

Signs like this, protesting any proposal the Niagara Peninsula Conservation Authority may have to “offset” wetlands to make way for development have become common at environmental rallies in the region.

Are there are things GR representatives were told by parties here that gave them reason to believe that whatever obstacles are faced at that site, they can be surmounted? Perhaps we will never know.

As for any  role Ministry of Natural Resources scientists  may have played in ‘stalling’ this project, I contacted the ministry after the Globe story was published and was told that it was Niagara’s regional government that called them in to assist with a review of GR’s plans visa vi environmental features on the Thundering Waters lands.

Here is the response I received this July 26th from Jolanta Kowalski, a senior media relations officer at the ministry –

“The Region of Niagara asked  MNRF (the Ministry of Natural Resources and Forestry) to provide comment on the region’s own Environmental Impact Study (EIS), which included previously unidentified wetland areas, in the proposed Thundering Waters Project area. Ministry staff reviewed the wetlands on the property again using the current Ontario Wetland Evaluation System and determined them to be Provincially significant Wetlands (PSW). However, of the additional 21hectares of wetlands identified on site in the EIS by the region’s consultant, MNRF determined only 18hectares was PSW.”

I don’t know about you, but this doesn’t sound much like anyone at the ministry unfairly changed the rules in the middle of a game. In fact, it looks like the ministry scientists actually decided on a fewer number of hectares of additional wetlands than other consultants, including ones working for the region, did.

Wetlands pay a vital role on this planet. They are, among other things, purifiers of water and cradles of life that virtually every species up to and including humans need to go on living a healthy existence.

In Niagara and other regions of southern Ontario, only about five to 10 per cent of the wetlands that were here a few centuries ago are left  due to reasons that mostly have to do with human activities. Over and over again, experts around the world have warned that we can’t afford to lose ever more of what’s left.

The Ontario government has responded to these warnings with language in its current  ‘Growth Plan for the Greater Golden Horseshoe which, just as one small example, reads like this; “This Plan prevails where there is a conflict between this Plan and the PPS (Provincial Policy Statement). The only exception is where the conflict is between policies relating to the natural environment or human health. In that case, the direction that provides more protection to the natural environment or human health prevails.”

This is the kind of language ministry scientists are supposed to have firmly in mind when they are identifying and mapping out significant ecological features in places like Thundering Waters.

It is language that more of our municipal leaders should take seriously as well as decisions are made about where residential and commercial development should go.

There are still plenty of places to grow inside Niagara’s existing urban boundaries that do not threaten the integrity of what little is left of our natural heritage in this region.

The only thing that appears to be missing is enough politicians in the region with the imagination and will to encourage growth in ways that does not place more of that precious heritage at risk.

Here, if you missed it, is a link to The Globe story – https://www.theglobeandmail.com/real-estate/fight-for-wetland-protection-stalls-large-niagara-falls-development/article35801924/