Niagara Falls, Ontario – With a grand opening ceremony held this July 21st, The Niagara Parks Commission officially unveiled its newly revitalized Niagara Glen Nature Centre, as a trailhead to the Niagara River gorge and an interpretation facility that will focus on Niagara Parks’ important stewardship role, while educating the public on the geological, environmental and historical significance of the spectacular Niagara Glen. 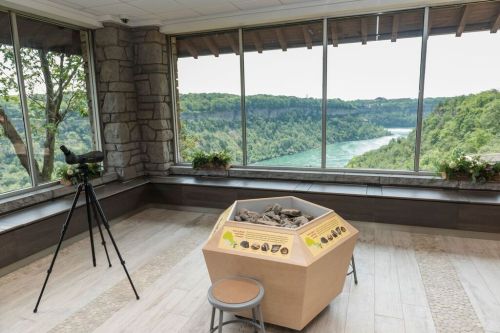 The Niagara Glen has become a renowned outdoor destination for hikers, cyclists, conservationists, boulderers and anyone seeking an opportunity to connect with nature.

In recognition of its growing popularity as a destination for nature enthusiasts, the new Niagara Glen Nature Centre has been enhanced with new programming options, with a focus on school programs, outdoor programming and guided tours of the Glen.

The trailhead site will also offer an accessible washroom, a bike locking station, as well as a bike repair station; a welcome addition for all users of the Niagara River Recreation Trail, the paved pathway that travels along the Niagara River from Fort Erie to Niagara-on-the-Lake.

“The Niagara Glen is a living landscape surrounded by the spreading canopies of native trees, wildlife and an abundance of rushing water. These defining features of the Niagara River experience, are an undeniable treasure of natural beauty, which has been protected and preserved by Niagara Parks, since 1894,” stated Niagara Parks Chair Janice Thomson. 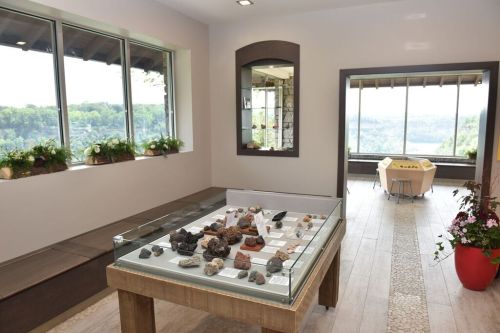 Some of the nature exhibits on display in Niagara Park’s new Niagara Glen visitors centre. Photo courtesy of Niagara Parks

“This revitalized Niagara Glen Nature Centre will allow Niagara Parks to highlight the important stewardship role with which we are entrusted, all while educating the public on the geological, environmental and historical significance of the spectacular Niagara Glen.”

An exciting aspect of the revitalization has been Niagara Parks’ relationship with its sister provincial agency Science North in Sudbury, to bring the popular Nature Exchange, an interactive learning space that promotes responsible collecting, research and education, to the Niagara Glen Nature Centre.

“The Niagara Parks Niagara Glen Nature Centre is an ideal site and host for the Nature Exchange, given its remarkable natural setting, geological history and delicate ecosystem,” remarked Niagara Parks Chair, Janice Thomson. “The Nature Exchange will serve to educate visitors and increase public knowledge of conservation ethics and respect for all living things, reinforcing Niagara Parks’ steadfast commitment to preserving the natural heritage of the Niagara Glen and all the parklands along the Niagara River corridor.”

Built in 1923, the Niagara Glen Nature Centre has a rich history, including past uses as a restaurant, caretaker’s residence and even a temporary residence for School of Horticulture students from 1933-1934. With the goal of restoring the beautiful, historic building, a major part of the revitalization effort was an extensive renovation of the interior space, including the installation of new flooring and ceilings, upgrades to all lighting, a complete renovation of the office and storage spaces and the installation of accessible public washrooms on the main floor.

As well, to support the new programming options, the interpretive and retail areas were completely redeveloped with new desks, fixtures, built-in benches and digital displays with a new computer desk to complete the interactive space designated for the new Nature Exchange.