It’s Long Past Time for the Ontario Government to Appoint a Supervisor to Clean the NPCA Out!

Calls for an Independent, Forensic Audit of the Conservation Authority – from Citizens and from Local Municipalities across the Niagara Watershed – have been reduced to a Joke by an NPCA board that has gone Rogue and has Got to Go!

Let’s start by saying congratulations to St. Catharines city councillor Bruce Williamson and a majority of others on the council for approving a motion at their March 6th meeting that calls for reforming the way members are appointed to the Niagara Peninsula Conservation Authority board.

This motion – a follow-up to one initiated by Pelham Mayor Dave Augustyn and his council in February – calls for something, should the Ontario government choose to embrace it, that has been long-needed to hopefully allow local municipalities to appoint individuals with interest and expertise in the field of conservation to the NPCA board rather than have the board stacked with politicians appointed mostly by Niagara’s regional government.

Citizens protest NPCA at its January 2017 board meeting. File Photo by Doug Draper

“This motion constitutes a positive, progressive and desperately needed change,” said Williamson to his fellow councillors. “The current governance model has not only proven itself ineffective, but has insisted in creating a regime which works contrary to the goals of protecting our unique ecosystems.”

And so much so that when I watched the video of this March 6th council meeting on my computer and heard St. Catharines regional councillor Bruce Timms, who sits on the NPCA board and was its chair until this January, argue back that the reform the motion calls for might, somehow, make the NPCA less accountable to the public, I almost spit out the coffee I had just swallowed down.

“There is a measure of accountability that an independently appointed citizen does not have,” I heard Timms say.

What measure of accountability is this guy talking about? Is it the same measure o accountability that has this board, stacked as it is with Niagara regional councillors and mayors for Welland, Port Colborne, Wainfleet, Niagara Falls, Niagara-on-the-Lake and Wet Lincoln, suing a private citizen in Niagara after raising many of the same questions and concerns that God knows how many other residents across Niagara and parts of Hamilton and Haldimand County have raised over the way this NPCA, with its board stalked with politicians, is spending millions of dollars of our tax money?

Is it the same measure of accountability that up to December 1st of this past year, had Timms, who was still chair of the NPCA board at the time, going to the same St. Catharines council and urging it not to support an earlier motion tabled by Williamson to call on the Ontario government to launch a thorough forensic audit and investigation of the NPCA’s operations. 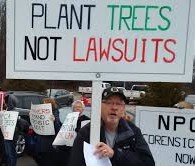 Fortunately, that motion also passed and was followed by a number of other municipal councils, including those for Port Colborne, Niagara-on-the-Lake, Pelham, Welland and Hamilton, calling for the same.

Then, when the attempt to persuade those councils not to take their call for an audit to the province failed, the NPCA’s fallback position became ‘then take your request for an audit directly to our board and we will arrange it’ – a position that received the whole-hearted and not so surprising support of Niagara Falls Mayor Jim Diodati and Wainfleet Mayor April Jeffs (both members of the NPCA board) and a majority on their councils.

The Niagara Falls and Wainfleet motions calling on the NPCA to handle the arrangement for an audit of itself seemed to tee things up quite nicely for this past January’s NPCA board meeting until Bill Hodgson, a Lincoln regional councillor and the only elected member of the NPCA board I and many others have any regard for (quite a bit of regard, actually) tabled a motion in front of a large gallery of Niagara area citizens that structured the audit process in a way that at least had some independent, third-party agents steering it.

Now what is an NPCA that never really wanted a full forensic or value for money audit of its operations done in the first place to do?

Okay, maybe it can use the time since the January board meeting to draft some materials for how to go about scoping and setting the terms of reference so that barely six weeks later, they can call the board back together and pass something that barely looks like what was called for in Hodgson’s motion.

That gathering of the board, by the way, takes place this March 8th, in the morning when many members of the public who might wish to attend will be working, and in a room in the basement of a Welland building where the NPCA is headquartered that is so cramped; it won’t fit many people anyway.

A public demonstration in front of the NPCA’s Welland offices in the fall of 2016. File Photo by Doug Draper

In the meantime, and according to a story St. Catharines Standard reporter Bill Sawchuk wrote for publication in the newspaper this past February 28th, a representative of the Ontario auditor general called with an offer to do the audit, but apparently the timing of the offer didn’t work well for the NPCA.

“We contacted them to set up a meeting or a conference call because we had received correspondence from the different municipalities,” the Ontario auditor’s representative, Bonnie Lysyk, was quoted saying with an obvious reference to all those municipal councils that had passed motions calling on the province to do the audit.

“Typically, our teams are in the field doing their audits, but I had one team available, and I would have been able to provide some assistance right away if (NPCA) wanted us,” Lysyk said. “It looks to me like they are defining their scope and objectives, and I could only wait until a certain point. I won’t have anybody free until the fall now.

Defining their scope and objectives? What? For the audit?

What citizen or municipal councillor in Niagara and Hamilton who has been calling for the province to do the audit all of these weeks and months ever wanted the NPCA to scope out what an auditor would be called in to investigate? That is fox looking after the hen house stuff and not to many people I’ve been following on this issue – outside of board members and managers at the NPCA itself – wants anything like that.

Sandy Annunziata, NPCA chairman and a regional councillor from Fort Erie, said the authority hasn’t closed any doors on the auditor general’s offer. 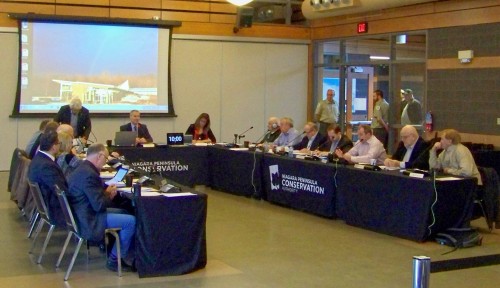 The NPCA board. Time to say Goodbye!

“I can’t make a unilateral decision, and we really wanted to respect the motion from Bill Hodgson as well as the direction of the board,” Annunziata said. “Right now it is about timing. Bonnie and I made the commitment, that if we can collaborate in the future, we will certainly pursue that.”

But wouldn’t you know it. Apparently the timing just wasn’t quite right for taking the Ontario auditor’s office up on its offer, and there was Sandy Annunziati, the new NPCA board chair and, you could have guessed it, another regional councillor (this time for Fort Erie), quoted in Bill Sawchuk’s story saying of the Ontario auditor’s offer; “I can’t make a unilateral decision, and we really wanted to respect the motion from Bill Hodgson as well as the direction of the board. … Right now it is about timing. Bonnie and I made the commitment, that if we can collaborate in the future, we will certainly pursue that.”

Come on folks. Haven’t we just about had enough of all this crap?

A true forensic audit of this body – and by true, I mean a completely independent done – certainly needs to be done to find out what all it is they may be hiding, because they sure act like a body that has something to hide.

But what we need even more than that, is for the Ontario government to recognize and respect the high level of distrust for this body that has been expressed by individual citizens and municipal councils, and to finally use the powers it has to appoint a supervisor and sweep out the entire board and upper management of the NPCA and start over.

By the way, if the Ontario government still hasn’t got the guts and will to do that, I understand that it may be possible that if just a few municipal councils in the Niagara watershed take advantage of provisions in the Ontario Conservation Act, they could vote to have the NPCA dissolved – then maybe the provincial government will finally be moved to take the executive action it should have taken many months ago when members of this NPCA board and regional council first said no to citizens’ demands for a full audit.

Let’s finish this mess up and get back to doing the job of conserving and protecting what is left of our natural heritage in this region.