A News Release from the Green Party of Ontario

THIS BUDGET IS PRO-SPRAWL AND ANTI-CLIMATE.

Full of old ideas we don’t want, Doug Ford’s pro-sprawl, anti-climate budget is out of touch with what Ontarians want.

The government says if it’s re-elected it will invest money in highways, cars, and sprawl. These are old ideas Ontario can’t afford.

This $198.6B budget is selling Ontarians a bill of goods. Minister Bethlenfalvy announced investments in “clean steel” — a disastrous fairy tale that will only increase Ontario’s emissions — an increase in housing supply without measures to lower costs, and the same calamitous highways we’ve been fighting against for years.

These are 1950’s ideas that will pump a staggering $25 billion into more highways and sprawl that will pollute the air, make life even more expensive, pave over the farmland that feeds us and destroy the nature that protects us from flooding. This is unacceptable. 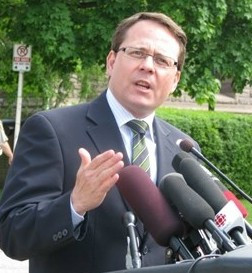 Ontario Green Leader Mike Schreiner says, “The fact there’s no environment chapter in this budget shows us that Ford’s primary issue around the environment is paving it over.”

IT’S TIME FOR A GREEN FUTURE.

Ontario Greens have a plan for more caring, connected communities. We’re building more affordable housing, so you can live, work and play in a community you can afford, and spend less time in your car.

We’re cutting carbon emissions to net-zero by investing in public transit, helping you make your home greener and more efficient, and doubling the size of the Greenbelt to include a new Bluebelt to protect Ontario’s water.

We’re protecting the environment while making Ontario a leader in the new, green economy. Ontario Greens are also committed to improving healthcare by increasing access to mental health treatment, increasing support for elder care and making sure everyone gets access to the treatment they deserve.

These aren’t highways and old ideas. These are new solutions to today’s problems.

This is the Ontario you want and the leadership we need.