A News Release from the Office of Buffalo, N.Y-area Congressman Brian Higgins

(A Brief Foreword Note from Doug Draper at Niagara At Large – We Canadians have every reason to applaud this news too. Any significant step any government in the United States or Canadian makes to improve the quality of the Great Lakes benefits us all!)

Through U.S. Biden Administration’s BiPartisan Infrasctructure Bill, A Combined $3.125 Billion Will be Invested in the Great Lakes over the Next 5 Years

Congressman Brian Higgins (NY-26) was joined by representatives from the U.S. Environmental Protection Agency (EPA) Region 2, the New York State Department of Environmental Conservation, Buffalo Niagara Waterkeepers, and Citizens Campaign for the Environment to highlight how significant federal investments in the Great Lakes will have a lasting impact on Western New York. 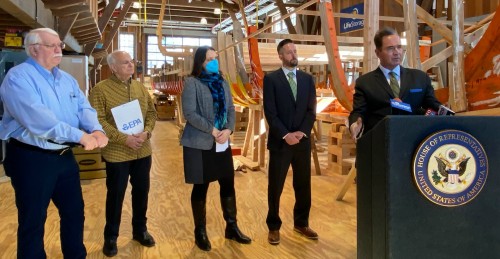 In an effort to clean up polluted areas in the Great Lakes region, the U.S. and Canada previously outlined Remedial Action Plans to address 43 “Areas of Concern”<https://www.epa.gov/great-lakes-aocs/list-great-lakes-aocs> in both countries identified in the 1980s.

The Buffalo River, once so polluted with industrial waste that it caught fire, flows directly into the upper Niagara River – a source of water for tens-of-thousands of Americans and Canadians downstream. Thanks to decades of work it is significantly cleaner today. Yet more needs to be done.

Congressman Brian Higgins, a member of the Congressional Great Lakes Task Force, said, “The importance and impact of this achievement, made possible thanks to the bipartisan infrastructure law, can’t be overstated.

It was just a generation ago that the Buffalo River was so polluted with industrial waste that it caught on fire. Cleaning up and de-listing Great Lakes Areas of Concern, including the Buffalo River, Niagara River and Eighteen Mile Creek in Western New York, is an incredible accomplishment that will contribute to a healthier environment and economy for Great Lakes communities and the entire nation.”

“Through the investments from President Biden’s Bipartisan Infrastructure Law, we will make unprecedented progress in our efforts to restore and protect the waters and the communities of the Great Lakes basin, including in Western New York.”

Our freshwater resources contributed to a booming economy in the early 20th Century, but were exploited, abused and abandoned when human activity polluted them beyond recognition.

Demonstrated by the restoration success in the Buffalo River, our community has proven that investments in the Great Lakes Restoration Initiative and the AOC program are the catalyst for change for these impaired waterways.

Now, with this meaningful commitment from the bipartisan infrastructure bill, restoration and recovery can continue for WNY’s most toxic hot spots. Our deepest gratitude to President Biden, Congress and the EPA for recognizing that the return on investment is in clean water and healthy communities.“

“BIL resources will sustain efforts underway to clean up historic contamination, protect communities from flooding and severe weather made worse by climate change, safeguard drinking water supplies for millions of New Yorkers and habitats for fish and wildlife, and create new opportunities for recreation on Lake Erie and Lake Ontario.

“Restoration of the Oswego River Area of Concern opened a wealth of economic and recreation opportunities in downtown Oswego, it’s happening here along the Buffalo River, and there’s more to come. New York is grateful to all of our partners for their ongoing commitment to cleaning up these waters to benefit all New Yorkers.”

“The historic investments being made through the bipartisan infrastructure law will allow us to finally clean up toxic pollution that has poisoned drinking water and threatened the health of our communities for decades,” said Brian Smith, Associate Executive Director for Citizens Campaign for the Environment (CCE).

Efforts to continue restoring the environmental health of our shared Great Lakes must continue..for the sake of generations to come.

“This will help close the book on our legacy of toxic contamination in the Great Lakes, and provide generations to come with clean drinking water, job opportunities, and healthy communities. We are grateful to Congressman Higgins, the EPA, and President Biden for their leadership in making this historic achievement possible.”

Between 2010 and 2021, over $97 million in federal Great Lakes Restoration Initiative funding has been invested in Western New York, contributing to 254 projects in Erie and Niagara Counties.

Great Lakes funding included in the Infrastructure Law, combined with a large boost in annual Great Lakes Restoration Initiative funding authorized by Congress, will provide a record $3.125 billion in investments in and around the Great Lakes over the next 5 years.

A 2018 report<https://www.glc.org/wp-content/uploads/GLRI-Fact-Sheet-20180924.pdf> found that every dollar invested in the Great Lakes produces at least $3.35 of additional economic activity in the Great Lakes region and in some communities, like Buffalo and Detroit, the rate of return is even higher producing more than $4 of additional economic activity for each dollar invested.