“We need some of the world’s greatest brains and minds fixed on repairing this planet. Not trying to find the next place to go.”       – Prince William, Duke of Cambridge and now second in line to the British Throne 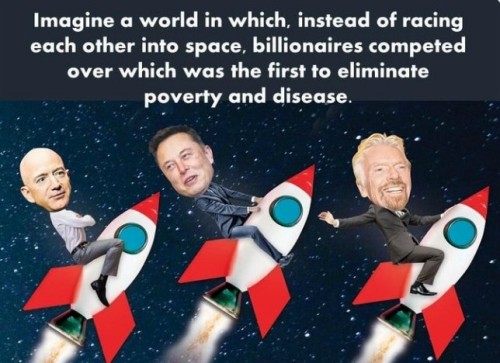 While some of the world’s richest people like Jeff Bezos, Richard Branson and Elon Musk – people who don’t pay a penny of taxes down here on earth – play around with rocketing tourists into space, at least some wonder the following.

They wonder if these top of the Fortune 500 plutocrats might consider investing some of their fortune to make things better down here on planet earth.

I am not the biggest fan in the world of the British monarchy, but I would like to give Prince Williams two big thumbs up for being one of the latest to come out and say that in a BBC interview that there is something about these billionaires playing around with space toys that is way out of whack when we are facing a catastrophic climate emergency earth side.

Prince William  did so just one day after, this Wednesday, October 13th, Jeff Bezos launched another rocket, containing Star Trek icon William Shatner (better known to some as Commander James T. Kirk of the USS Enterprise) among the few passengers – which at the very least was a stroke of marketing genius on Bezos’ part.

Here is some of what Prince William had to say, which you can listen to by clicking on the screen immediately below –

But just to be fair, William Shatner, a person known to advocate for environmental protection and who is someone many of us have a soft spot for, was on a CNN program this October 14th, and his comments on the urgent need to address the climate crisis are also well worth listening to.

Let us all embrace the concerns of Prince William and the sense of urgency expressed by William Shatner.

There is no more time for political bullshit. We have rune out of time. We need to take heroic action to address this climate emergency NOW!