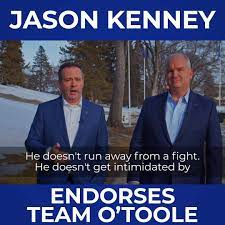 “The choices that leaders make during a crisis matter.”                  – Justin Trudeau, leader of Canada’s governing Liberals, responding to federal Conservative leader Erin O’Toole’s unwillingness to offer clear answers to reporters’ questions about vaccine mandates and the mess that O’Toole’s right-wing, climate denying friend, Alberta Premier Jason Kenney, has made of dealing with the pandemic in his province.

Let me begin this commentary with perhaps the one point many of us can agree on.

And the point is this.

I am completely on side with what is evidently view of a majority of my fellow Canadians that Trudeau and his Liberals should not have called this snap election at a time when we are entering a fourth wave of a pandemic that is wreaking so much havoc on our lives, and the health and economic welfare of the communities we live in.

Indeed, they should not have called it at a time when our federal government’s full attention should be paid to so many other issues, like the crop-killing droughts and the wildfires and so many other climate-related assaults on people, property and communities across the country. 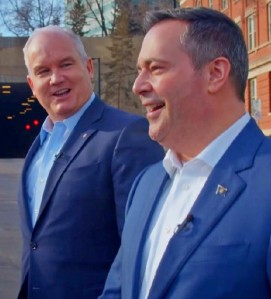 Federal Cohservative Leader Erin O’Toole, with his good buddy, Alberta Premier Jason Kenney who, thanks to completely opening up his province this summer, now has a COVID-19 firestorm on his hands that O’Toole is having trouble speaking too.

Then there is an election call just at a time when Canadian citizens and allies of our country are desperately trying to escape possible torcher and death in Afghanistan.

I suspected from the start that Trudeau and his Liberal Party captains made the decision to call the election because internal polling this past August told them that this may be their last best chance, this side of a fourth wave of a pandemic which is bound to make potential voters more grumpy, to win back a majority government.

Looking at so many of the daily tracking polls since Trudeau made that election call, Trudeau now may have wished he had not been so quick to pull the trigger. That’s because most of the daily polls have shown Trudeau’s Liberal’s in a virtual tie nationally with O’Toole’s Conservatives, with the NDP behind and the other parties, including the Greens and the infamous People’s Party of Canada (PPC) down in the basement

That leaves the voter who posts Niagara At Large with no choice but to vote for Trudeau because I am convinced that the alternative – a Conservative government in Canada – would be a disaster for the urgent work we need to do to address the climate emergency and so many other challenges around quality health care, education and other vital services present and future generations need.

Those of you who have been regular readers of the news and commentary on Niagara At Large should know that we have posted no end of well-deserved criticism of Trudeau’s half-hearted efforts on fighting climate change and on addressing a host of other issues. 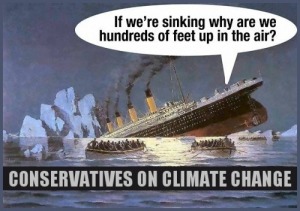 Yet now that we are here – just a weekend away from a Monday, September 20th election that will decide what leadership role our Canada will play national and internationally during a time of life-and-death crisis.

With that in mind, the last thing we need is an O’Toole government whose members, at a national meeting less than a year ago, voted down a motion to declare climate change a man-made problem in their party platform.

And just a reminder that during the 2015 federal election – just six years ago – the then-Conservative government of Stephen Harper, with O’Toole serving as a senior member pandered to the worst of us by pressing against a Canadian welcome to refugees (including that little toddler from the Middle East whose body washed up on the beaches of Turkey, and promised to implement a snitch line for what the Conservatives called “barbaric cultural practices” (whatever they are), while giving a nod and wink to what the party called “old stock Canadians.” 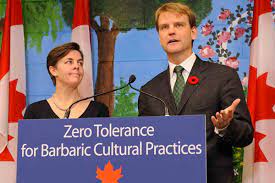 Two of Erie O’Toole’s 2015 Conservative Party colleagues pitch the ideai a tip line people can call to report “barbaric cultural practices.” These practices, it was suggested, was any behaviour out of line with the conduct of so-called “old stock Canadians.”

That 2015 Harper/O’Toole campaign was the most race-laced ones I witnessed in Canada since I first began voting in federal elections some 50 years ago.

So that, for better or worse, brings me back to the only choice I feel I have in a Niagara Centre riding where the race is almost neck to neck between the Liberals and Conservatives – the Trudeau Liberals.

Not that I don’t have a good deal of respect for the dignity and intelligence of federal NDP Leader Jagmeet Singh  and Green Party Leader Annamie Paul. If you happen to be fortunate enough to have an NDP or Green Party candidate in your riding that has a real chance of winning, then vote for them. 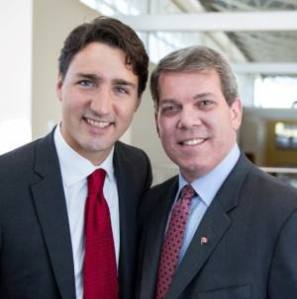 But in many ridings across the country, it is a close call between the Liberals and Conservatives, and any amount of vote splitting could cause the Conservative candidate to win.

That is certainly the case in my riding of Niagara Centre and what makes voting for the Liberals much easier is that the incumbent Liberal is Vance Badawey, who I have known to be a decent person going back to my days covering him as a Mayor of Port Colborne and a Niagara Regional Councillor.

So there you go. For better or worse, vote for Trudeau and his Liberals, and if you want to debate with me over that, bring it on

A P.S. from Doug Draper – Let us all keep pushing our federal and provincial legislatures for climate action when this election is over. It will take relentless citizen lobbying and people power to get the job done!

To read some related news reports on this, click on the following links –

Finally, here is a link for a Niagara At Large commentary on the federal Conservative Party’s race-soaked campaign in 2015, when Erin O’Toole served as a senior member of the then-government Harper party – https://niagaraatlarge.com/2015/10/07/harper-plays-to-the-darker-side-of-our-national-character-and-it-seems-to-be-working/