A Commentary by Niagara At Large reporter and publisher Doug Draper, followed by a Statement by Canada’s Conservative Leader Erin O’Toole

Canada’s Conservative Leader Erin O’Toole has tried to deny that his party doesn’t take the global climate emergency seriously, but if there were any more proof that he and his party doesn’t, check out the statement O’Toole released below.

It is a statement that is a gift to the now governing Justin Trudeau Liberals and every other federal party vying to convince a majority of Canadians – including growing numbers of engaged younger voters – that they are serious about addressing one of the most serious and potentially most urgent challenges facing us in the 21st century.

It appears that only Erin O’Toole and his federal Conservatives could be divorced enough from the reality of the climate emergency to continue advocating for the Keystone XL Pipeline and virtually every other pipeline that will perpetuated the planetary damage the Alberta tar sands are doing for decades to come. 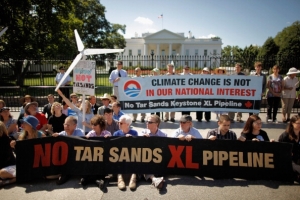 Somehow Erin O’Toole and the climate laggards in his Conservative Party still don’t get that Americans don’t want this tar sands XL  pipeline either.

O’Toole and company take their stance in the name of “jobs” when they probably know full well that the walls, world-wide, are closing in on fossil fuels, and every country from China to the United States under its current president, Joe Biden, are investing in greener sources of energy that – yes – will produce jobs for the 21st. century too.

The following statement is one more reason why Canadians cannot allow the federal Conservatives to form a government – not if we want our country to be an energy leader in this century.

And now, here is a Statement from Conservative Leader Erin O’Toole on cancellation of Keystone XL Pipeline

Ottawa, ON – The Hon. Erin O’Toole, Leader of Canada’s Conservatives and the Leader of the Official Opposition, issued the following statement following the cancellation of the Keystone XL pipeline project:

“The cancellation of the Keystone XL pipeline extension is devastating. At a time when Canadians are desperate to get back to work, the loss of this important project only makes this harder.

“Today’s decision is a culmination of the Trudeau Liberals’ failure to recognize the importance of pipeline projects and the need to secure Canadian jobs in the resource sector.

For O’Toole and Conservative Party company, apparently the billions of dollars of costs around damage like this means less than trying to hold on to some jobs in the tar sands, that are going to fade away anyway as the world moves on.

“For years, Conservatives have been calling on Justin Trudeau to champion Canadian energy and workers. Yet, he has failed to do so time after time.

“Securing jobs in the resource sector is an essential part of getting Canadians back to work and putting Canada’s recovery back on track. If you are worried about economic growth and job creation there is only one choice: Canada’s Conservatives.”