When the former Ontario Liberal government of Dalton McGuinty  declared almost two million acres of farmland in the Golden Horseshoe e in 2005 as a protected Greenbelt zone, the move was praised by the United Nations and by countries around the world.

Here in Ontario, though, there have always been representatives from the farming community, among them Niagara North Federation of Agriculture rep Austin Kirby, and the development industry in the province who have viewed the Greenbelt as a “nightmare” and as an unwanted obstacle to property speculation and urban sprawl.

In 2018, just a few months before the last Ontario election, Conservative leader Doug Ford was caught on a video tape, promising supporters in the development industry that he would allow the selling off of “chunks” of the Greenbelt if he were elected Premier. (click the video at the bottom of this post if you have not yet seen it.)

Since then, Ford and his Conservative government have motored ahead with one move after another that has weakened or completely eliminated rules and programs for protecting and preserving what is left of Ontario’s natural resources – so much so that last year, former Toronto mayor David Crombie and six members of his staff on the province’s Greenbelt Council, there to help preserve the greenbelt lands from north of Lake Ontario to Niagara-on-the-Lake, quit in protest.

So what does Ford and his government do?

They turn around this April and appoint former Conservative MPP Norm Sterling to Crombie’s old position as chair of Ontario’s Greenbelt Council. 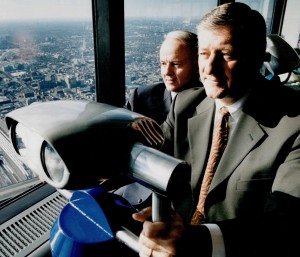 Back in the bad old days, gazing over Ontario from the CN Tower in Toronto, when Mike Harris (right) was premier, and Norm Sterling, to the left of him, was Ontario’s minster of environment at a time when he was taking a meat axe to the ministries programs.

Norm Sterling, if you don’t recall, spoke out in the provincial legislature against establishing the Greenbelt in the first place as he sided with those who wanted the freedom to sell off ever more of our farmlands to developers.

Worse yet, Sterling served as Ontario’s environment minister for the former Conservative government of Mike Harris in the years leading up to one of the worst community drinking water disasters in Canadian history – the Walkerton, Ontario contaminated water catastrophe that caused six deaths and more than 2,000 serious illnesses in May of 2000.

Yes, we know. The standard Conservative Party talking points is that the tragedy was a result of two incompetent characters, running Walkerton’s water plant, while faking test results for water heading for residents’ taps, with a beer fridge nearby for their lubrication.

The problem with that bit of scapegoating is that an in-depth inquiry into the disaster showed that numerous moves by the Harris government to weaken measures for protecting community water supplies made it possible for such a death and sickness toll to occur.

Chief among those who set the stage for the Walkerton disaster was Norm Sterling who, while serving as Ontario’s Minister of Environment in the years leading up to it, privatized what were state-of –the-art water testing laboratories, slashed spending for Environment Ministry inspection and enforcement, and cut other programs for protecting creeks and rivers upstream from community water plants.

And now, thanks to Ford and his government, Sterling has been appointed to chair Ontario’s Greenbelt Council.

God help us, and god help what is left of our province’s precious food-growing lands. 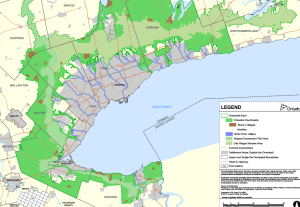 Our Greenbelt in Ontario, shown on the map in bright green through Niagara to the shores of the Niagara River.

QUEEN’S PARK — In a fresh battle of Doug Ford’s ongoing war on the Greenbelt, he’s appointed Norm Sterling as Chair of the Greenbelt Council – a former PC MPP and Cabinet Minister who voted against creation of the Greenbelt: 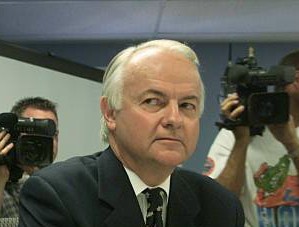 Norm Sterling, at the Walkerton, Ontario water disaster inquiry – a disaster that his cuts to the province’s Ministry of Environment, and privatization of water testing labs, helped set the stage for.

“The other part of the legislation I read that is troubling is a clause in here that says, if there is amendment after the plan is put down, the total area can’t reduce in size. When you’re painting such a wide swath of land, quite frankly, the loss of a couple of thousand hectares is not that significant.”

“I really feel this Greenbelt legislation is insensitive to the public in terms of their ability to challenge whatever ‘science’ may be put forward here, or not….This is a failed policy in this government at this time.” – Norm Sterling, February 25th, 2005

“Putting the fox in charge of the henhouse is classic Doug Ford,” said Shaw. “Time and time again Ford has been busted trying to pave the Greenbelt as a favour to his donors. Ontarians have a right to be worried about this appointment.”

Sterling replaces David Crombie, the former Greenbelt Council chair who resigned in protest of a Ford government plan to gut environmental protections in the province.

To watch Doug Ford telling developers he is going to open “big chunks” of the Greenbelt up for development, click on the screen immediately below –