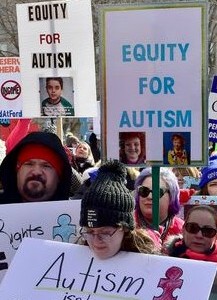 Ahead of World Autism Awareness Day on April 2, MPP Armstrong was joined by parents of children with autism Wednesday morning to share their experiences, and the impact of the Ford government’s continued underfunding and lack of support for children with autism

“Tens of thousands of kids in Ontario have repeatedly been let down by successive governments in this province. And I refuse to stand idly by while that continues to happen,” said Armstrong. “Doug Ford has betrayed a whole generation of kids with autism, who are suffering without the services they need, leaving their families in despair with no hope for the future.”

Under Ford’s government the waitlist for the Ontario Autism Program has ballooned to 42,000 kids, according to the Financial Accountability Office of Ontario’s estimates. This comes after Ford promised to eliminate the waitlist in 2019.

“For two years now, no new kids with autism have received treatments. The children who had been receiving therapies have suffered a reduction in services, which has forced clinics to close and service providers out of business across this province. Meanwhile, families are at wits’ end hoping that their interim funding won’t run out and an untold amount of kids have now aged out of the program without any support,” said Armstrong.

“Every parent of a child with autism will tell you that every day matters. I have spoken with these families and many of those meetings end in tears,” said Armstrong. “Parents are forced to remortgage their homes, go further into debt, work multiple jobs and travel for hours to make sure their kid gets the therapies they need. It’s time for the government to step up and to commit to a truly needs-based model that leaves no kid behind.”

To watch a Video of Wednesday’s press conference, click on –  (https://twitter.com/i/broadcasts/1OdKrVZBDDYKX)

Angela Brandt, president of the Ontario Autism Coalition – “Many children have lost valuable time. This delay has and continues to cause irreparable harm. There will be long lasting effects to the government’s blunder with the OAP and will potentially cost our government billions in long term support for this generation of children with autism.”

Alina Cameron, parent of a child with autism in Slate River near Thunder Bay – “We have been living in perpetual uncertainty for years and quite frankly it’s frightening. My daughter, Fiona will regress, despite our best efforts and will fall back into dysregulation and the crises that accompany that. Her ability to learn will slow. I will have to watch her struggle needlessly knowing full well that the Ford government could have fixed this ages ago, had they the will.”

Natalie Canoglu, parent of a child with autism in London –  “Prior to the Ford government, my son had access to life-changing therapy. He no longer has that. We’ve been on the waitlist since April 2017. Our family has suffered without help, we see that toll on our mental health. We go in and out of crisis and have been in crisis many times over the years as we continue to go without service. I don’t have hope that change is coming.”

For one of the news commentaries Niagara At Large has posted on this issue over the past few years, click on – https://niagaraatlarge.com/2020/01/13/fords-tories-continue-to-make-ontarios-autistic-kids-and-their-families-wait-and-wait-and-wait-for-the-help-they-so-urgently-need/ .