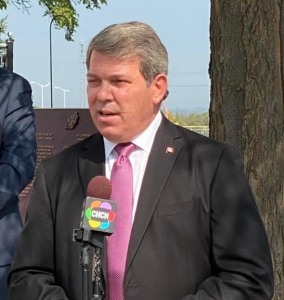 “Five years since Canada’s Truth and Reconciliation Commission released its report and 94 Calls to Action, we need to encourage and support initiatives that are demonstrably making a difference by redressing the past and working to eliminate bias, prejudice, discrimination, racism, and violence against Indigenous peoples,” said Vance Badawey, Member of Parliament for Niagara Centre.

Among the principles established for the Truth and Reconciliation Commission, mandated in Schedule “N” of the Indian Residential Schools Settlement Agreement and representing a national commitment, was the need to have forward looking efforts “in terms of rebuilding and renewing Aboriginal relationships and the relationship between Aboriginal and non-Aboriginal Canadians.”

Many agencies of federal and provincial government as well as regional and municipal government, along with educational institutions and enlightened industries, acknowledge the need for dialogue and action but are often at a loss on how best to proceed.

In the Niagara Region of Ontario, however, the past five years have witnessed the birth and growth of an innovative reconciliation movement – known as Landscape of Nations 360° – that has attracted the participation of Indigenous communities, civic leaders across all levels and branches of government, educational leaders of its major school districts, universities and colleges, arts organizations, and federal and provincial park systems that are providing access to historic land-based learning destinations.

Together, they are transforming not only the public’s understanding of its geographic landscape, but also Canada’s social landscape that infers inclusion, diversity, justice, and equity regarding Indigenous peoples.

“The reconciliation advances that LON 360° has consciously and with great determination and persistence fostered and fulfilled in the Niagara Region are truly extraordinary,” stated Badawey.

“Through the leadership efforts of Tim Johnson, Michele-Elise Burnett, and their circle of Indigenous advisors, cultural resource specialists, and scholars, they have functioned and executed on a conceptual, strategic, and implementation level that I believe is unparalleled in its highly visible and proven impacts.

“To understand the integrated approaches used by LON 360° to facilitate the Calls to Action is to witness real reconciliation in action that, together, constitute a model for all of Canada,” expressed Badawey.

“It’s important to understand that reconciliation is everyone’s responsibility,” said Tim Johnson. “By gathering allies and responding to the national mandate collectively, ourselves, we strive to make a difference in our region of Canada and to do so in a way that provides tangible and replicable examples for others.”

“The Initiative we’ve created and woven together is comprised of three pillars that are all designed to bridge the historical and cultural divide that has prevented the renewal of relations between Indigenous and non-Indigenous peoples within Canada,” said Michele-Elise Burnett. “These include the LON 360° Indigenous Education Initiative; The Great Niagara Escarpment Indigenous Cultural Map; and the Celebration of Nations Gathering that showcases Indigenous expressive arts, culture, creativity, diversity, and resilience.”

“It is through collaboration with LON 360°, learning how it has operated successfully over these past five years and exploring what its prospects are for national replication, that extends great opportunities for leading the country toward truth and healing and heading toward an honourable and lasting reconciliation within Canada,” stated Badawey.

“If we don’t get moving, we’re going to increasingly fall behind in our national responsibilities. It makes sense to recognize what’s actually working in improving relations between peoples within our society and then optimizing them to ensure our country continues to strive toward achieving its highest ideals and aspirations.”

In response to the LON 360° Reconciliation Initiative, funders, school districts, and provincial agencies have expressed enthusiastic support for its ground-breaking work.

Ignite the Spirit of Education Foundation stated, “the work accomplished by LON 360° has been extraordinary.” The District School Board of Niagara leadership wrote: “As Canadians, our national identity is deeply interwoven with that of Indigenous peoples. We view our partnership with the Landscape of Nations 360˚ as a critical aspect of these efforts.”

Niagara Catholic District School Board leaders stated: “The legacy of this initiative will be a model of collaboration for the development of a curriculum that honours and respects the dignity of Indigenous peoples, and that a full understanding of the contributions that Indigenous peoples have made throughout the history of Canada will help shape the future as we work together for truth and reconciliation.”

In addition to other partner agencies, Niagara Parks Commission Chair Sandie Bellows and Chief Executive Officer David Adames wrote: “We have considered it an honour to support and host the Landscape of Nations 360° initiative and will continue to commemorate and celebrate the history and culture of Indigenous nations and peoples along our shared lands.”

Regarding the collaboration, Badawey and LON 360° agree to cooperate on areas of mutual interest, including the deepening of Indigenous knowledge and perspectives in Canada’s educational sector and within public discourse; strengthening awareness, understanding, and respect for the histories, languages, and traditions of Indigenous peoples; and advancing reconciliation opportunities in the Niagara Region and, through guidance, throughout the country.