Andrea Horwath Is Forcing A Vote This October 20th On A Motion To Get For-Profit Companies Out Of Long-Term Care, And Replace Them With A Non-Profit And Public System

QUEEN’S PARK — This Tuesday, October 20th, Andrea Horwath will force a vote in the Ontario legislature on a motion to get for-profit companies out of long-term care, and replace them with an all non-profit and public system.

“COVID-19 revealed a disaster behind the walls of long-term care homes. More than 1,900 people have died, shattering thousands of families. And a second wave is upon us. We need to take action to protect seniors this time, and we have to do it now,” said Horwath.

“Then, after we make it out of this nightmare together, we need to fix the system for good. This pandemic ravaged long-term care homes because the system is a disaster – and it’s been getting worse for decades.”

Analyses have shown that for-profit long-term care homes were more dangerous during the pandemic. Residents who contracted COVID-19 were more likely to die if they lived in a for-profit facility. But even before the pandemic, the conditions were horrific, said Horwath.

“A revolving door of underpaid, part-time and temp workers, run off their feet in care homes so understaffed that seniors are regularly neglected. Folks sick with dehydration and malnourishment, languishing in gloomy, institution-like faciliites,” said Horwath.

“We can put an end to the days of short-changing our loved ones to pad the profits of private shareholders. We can ban greedy corporations from the sector, and make long-term care public and not-for-profit, so every last dollar goes into better care, a better quality of life for aging Ontarians, and more peace of mind for families.”

Horwath has released a comprehensive plan, called Aging Ontarians Deserve the Best (https://mcusercontent.com/353019c4e982ae7eb8ea53150/files/6ab1632c-500e-4f8a-bf99-e8237eca8ab0/Aging_Ontarians_Deserve_the_Best_EN.04.pdf) . Taking for-profit corporations out of long-term care is one foundational piece of her detailed commitment to support Ontarians to live at home longer, and feel at home if they do enter long-term care. 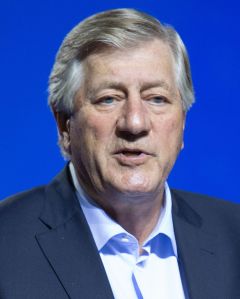 A number of long-term care homes in Ontario were first privatized in the late 1990s under this guy – then Premier Mike Harris. A good friend of current Premier Doug Ford, he now sits on the board of a corporation that owns and operates long-term care homes.

The Mike Harris Conservative government privatized long-term care, and cut one out of every 12 of its hospital and long-term care staff – firing nearly 25,000 health care workers.

Ford has built just 34 individual long-term care beds, and is planning another $34 million in cuts. Both parties cut inspections, and blocked public inquiries into long-term care.

Whereas successive Conservative and Liberal governments built a system where big, private corporations warehouse seniors in institutional facilities, and have failed to hold accountable for-profit long-term care operators who did not keep their residents safe; and

Another hearse pulls out from a long-term care home in Ontario earlier this year when COVID-19 outbreaks  hit many long-term care facilities in this province and in other regions of Canada and the United States.

Whereas more than two-thirds of COVID-19-related deaths occurred in long-term care homes during the first wave of the pandemic, with data revealing that COVID-19 deaths were more frequent in for-profit long-term care homes than those operated by municipalities or non-profit organizations; and

Whereas not-for-profit long-term care means more money is available for care, not profits;

Therefore, the Legislative Assembly of Ontario calls on the Ford Government to eliminate for-profit care from Ontario’s long-term care system.