A Foreword by Doug Draper – 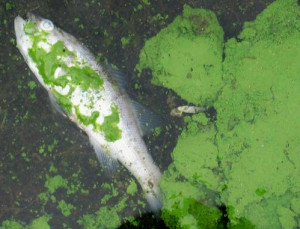 Evidence shows there are a good deal more fish in the Great Lakes dying from algae pollution traced to human activities than from fish-eating birds. Yet the Ford government is not laying a glove on polluters. So let’s blow away fish-eating birds.

It was about 25 or so years ago while I was still working as a full-time environment reporter at The St. Catharines Standard, that I attended a meeting in a banquet room of the Beacon – a restaurant around Jordan Harbour overlooking Lake Ontario – that was packed with anglers and hunters, all ginned up to kill a bird on the Great Lakes called double-crested cormorants.

Their argument, over and over again, was that these birds are “stealing our fish,” and they were doing it to a point, in their view, that there were very few fish in the Great Lakes left for them to catch.

There were some wildlife experts from the Ontario Ministry of Natural Resources there at the time who tried to explain that; ‘yes, while cormorants were efficient fish catchers in their own right,’ there were plenty of other reasons why fish populations were suffering in our great lakes – like industrial pollution, run-off of algae-generating chemicals from agricultural fields, and developers destroying spawning grounds with shoreline housing and strip malls.

No, this was a mob out to lynch double-crested cormorants. And thanks to Ontario’s Ford government – always looking for a simple, black and white solution when it comes to just about anything – the mob is back, and on the verge of getting a licence to blow these birds away.

Niagara At Large will have more to say about this in the days ahead. For now, here is the Ford government’s latest, July 31st news release on the subject – 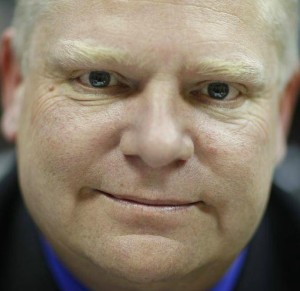 Ontario Premier Doug Ford has been working to unleash yahoos with guns on these birds for more than a year now.

FENELON FALLS – The Ontario government is taking steps to protect fish stocks and natural habitat from the harmful impacts of double-crested cormorants by introducing a fall harvest for the species.

The harvest will help address concerns about impacts to local ecosystems by cormorants, a bird that preys on fish, eating a pound a day, and that can damage trees in which they nest and roost.

The announcement was made today by John Yakabuski, Minister of Natural Resources and Forestry.

“We’ve heard concerns from property owners, hunters and anglers, and commercial fishers about the kind of damage cormorants have caused in their communities, so we’re taking steps to help them deal with any local issues,” said Minister Yakabuski.

“In large amounts, cormorant droppings can kill trees and other vegetation and destroy traditional nesting habitats for some other colonial waterbirds, so it’s critical that we take action to strike a healthy balance in local ecosystems.”

Following public consultations, the province has made changes to its initial proposal and has decided to introduce a hunting season that will run annually from September 15 to December 31, starting in 2020.

“We listened to those who provided comments about the cormorant hunting proposal, and as a result, we are introducing only a fall hunting season to avoid interfering with recreational users of waterways and nesting periods for some migratory birds,” said Minister Yakabuski.

“We have also reduced the maximum number of cormorants a hunter can take to 15 a day, which is a similar limit to one for federally regulated migratory game birds such as mourning doves, Snow and Ross’s Geese, Rails, coot and Gallinules.”

In 2019, the ministry and partner agencies surveyed cormorant colonies across the Great Lakes and select inland lakes in Ontario. Based on nest count surveys, there are an estimated minimum of 143,000 breeding cormorants in 344 colonies across the province. Combined with historical data, trends suggest that cormorant populations are increasing in Lake Ontario, Lake Erie, and Lake Superior and are stable on the St. Lawrence River and Lake Huron.

“Growing up in North Bay and spending many summers fishing on Lake Nipissing, I have seen firsthand the issues that cormorants have caused in some local areas,” said Mike Harris, Parliamentary Assistant to the Minister of Natural Resources and Forestry. “A new fall hunting season will help communities manage cormorant populations where they have negatively impacted natural habitat and other waterbird species.”

“Cormorants have been a growing problem on Sturgeon Lake and Balsam Lake, where they have covered islands with their guano, killing trees and vegetation,” said Laurie Scott, MPP for Haliburton-Kawartha Lakes-Brock. “We’re listening to local residents who have voiced their concerns and asked for additional tools to address the issue.”