Enjoy It, For As Long As It Lasts

These COVID times are strange ones, indeed.

For however long, the Toronto Blue Jays will be playing their home games here – at the very nice Coca-Cola Field in downtown Buffalo, New York

I am old enough to remember all of the lobbying in Buffalo, New York when doors opened in the late 1970s  for a home for a new Major League baseball team somewhere in this region of the continent.

As it turned out, Toronto won the bidding war and became home in 1977 to the newly minted Blue Jays, while baseball fans in Buffalo were left driving to Buffalo, Cleveland, or if they didn’t mind putting in a few more hours, Detroit or Pittsburgh for major league games.

Then again, Buffalo has a pretty darn good second-tier baseball team of its own, called The Bisons, and one great baseball stadium in its downtown area.

The high quality of Buffalo’s baseball stadium, called Coca-Cola Field, and Buffalo’s reputation as a sports town may be the reason why the Toronto Blue Jays organization announced this July 24th that the Blue Jays have temporarily made Buffalo, New York its base for home games. 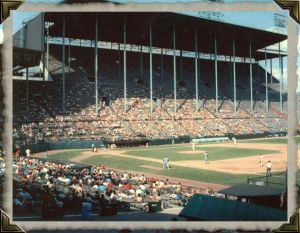 Torn down many years ago, the War Memorial Stadium in Buffalo, New York was a classic old baseball field, used in the 1980s movie, ‘The Natural’, staring Robert Redford.

That decision comes in the wake of concerns by Canadian governments that having baseball teams travel back and forth across the Canada-U.S. border while the United States continues to see rates of COVID-19 skyrocketing is just too dangerous.

As someone with a very soft spot to our ‘City of Good Neighbours’ across the Canada-U.S. border, I am pleased to see Buffalo get the nod to host a major league baseball team for at least a little while.

So we are all going to have to settle for watching Blue Jays baseball on a screen. No going out to the ball game – at least in any sort of physical way, for a while.

Now here is a brief news release on the announcement to make Buffalo the site for home games, from the Blue Jays website –

TORONTO — The Blue Jays have found a home for the 2020 MLB season at Sahlen Field in Buffalo, the club announced Friday.

Toronto had been searching for a stadium to play its home games since the Canadian federal government denied their approval to carry out the regular season at Rogers Centre. The club then explored playing at PNC Park in Pittsburgh, which was denied at the state level, and were exploring other options such as Camden Yards in Baltimore before landing on Buffalo, home to their Triple-A affiliate Buffalo Bisons.

“We are extremely grateful to have a home in Buffalo this season, thanks to the openness, creativity, and partnership of the Buffalo Bisons, Major League Baseball and Blue Jays staff, who have worked tirelessly to prepare us for games at Sahlen Field,” said club president and CEO Mark Shapiro in a statement. “This process has no doubt tested our team’s resilience, but our players and staff refuse to make excuses – we are determined to take the field on Opening Day today, and for the coming months, with the same intensity and competitiveness that our fans expect.”

Buffalo had been on the table throughout the search process to varying degrees as the Blue Jays explored Major League options, and some work remains to get the ballpark to the team’s standards. One major need is supplemental lighting, along with added infrastructure to allow for more physical distancing. The Blue Jays will need to “reimagine,” as Shapiro put it recently, some of the physical space, which could include the concourse or bleachers.

As the Blue Jays prepare their stadium, the first two home games, scheduled for July 29 -30 against the Nationals, will be moved to Washington, an easy switch as the Blue Jays will already be there on July 27 and 28 for the first half of what was originally a home and home.