Looking for a COVID Cure? Try Swallowing a Flashlight and Washing It Down with some Windex or Lysol

I want start with a little apology to all of you Niagara At Large readers out there.

I was going to post this commentary earlier but I got up feeling a little bit dizzy and feverish this morning. And no, it’s not what you might think. It isn’t COVID-19 – the dreaded Coronavirus.

As soon as I stopped seeing double and felt strong enough this morning to get up and phone my doctor – you may have heard of him, Hugo Z. Hackenbush – he told me that the symptoms were probably caused by my swallowing a pen light and washing it down with a couple of glasses of Lysol before I went to bed last night.

I feel kind of stupid admitting this, but I decided to do that on a leap of faith after watching Donald Trump do his daily White House briefing this April 23rd and shocking the world with news of a possible breakthrough cure for this horrific pandemic we are suffering through.

Reminding us how “very smart” he is, Trump went on to announce to the world that he has reason to believe that a combination of putting some “light inside the body,” along with injecting or ingesting “disinfectant” may be the ticket that “knocks (the Coronavirus) out in a minute.”

I’m usually at least a little reluctant to take the Donald seriously, but let’s face, we’ve all been praying for news of a cure, so I went right for my closet full of household disinfectants – Windex, Vim, Mr. Clean, and I finally settled on a bottle of Lysol with a nice lemon scent. I thought the lemon-scented solution might mix well in a cocktail.

Wow, it looks like Dr. Trump tried some of his own medicine!

And let’s face, Trump sure sounded convincing when he was talking about this during his briefing, didn’t he? At least I and more than half the populations of Mississippi, Alabama, and Florida believed him.

Indeed, Trump sounded so convincing that just like there was a raid on toilet paper a month ago, Trumpies in the states where the stable genius is most popular, formed lines around grocery stores and by early this morning the shelves in the aisles where they sell household cleaning agents were almost empty

Unfortunately for me, it wasn’t until I woke up the following morning and stopped seeing double that I read the following statement issued overnight by the makers of Lysol –

Let’s face it, it sure doesn’t say much for humans as a species that someone actually has to come out with a statement like this. It just about blows the bottom out of Darwin’s theory of evolution, doesn’t it? Maybe those evangelicals are right not to want their kids taught anything about Darwin in school 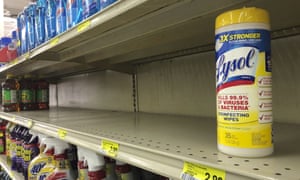 Like Trump always said, his supporters would go on following him if he shot someone in broad daylight on Fifth Avenue

But getting back to that warning from the Lysol maker for a moment, what a sad comment it is on humans as a species. I have been living with cats all of my adult life, and not one of them would be stupid enough to ingest anything into their bodies that smelled the least bit off, even if I were a plate of sirloin or salmon. They don’t need some reality TV con man like Trump or a statement from a manufacturer of cleaning agents to tell them what they should or shouldn’t put in their bodies.

So I’ve learned my lesson and from now on, if I need medical advice, I am going straight to my doctor, Hugo Z Hakenbush, who has at least as much horse sense when it comes to deciding what to subscribe a patient as Trump.

For those of you who may not know Dr. Hakenbush (aka Groucho Marx), click on the screen below for a little sample (from a classic old Marx Brothers movie called “A Day at the Races”) of him in action –

Oh and by the way, before I end this post, this was just my little stab at satire. I am sorry I feel that I have to say that, but it has become quite a mad world out there and, as we have seen, some people will believe almost anything, which was the con man’s flight path to the Oval Office. 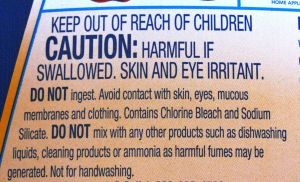 A warning label typically found on commercially sold disinfectants and cleaning agents. There are those who don’t read these warnings, I guess, and some don’t read at all.

It’s also a tragic comment on the human condition today that I have to end with a disclaimer like this, but if a chemical company feels it is necessary to come out with a statement warning people not to swallow products with potentially lethal industrial agents in them, I am afraid I can’t take any chances.

So please heed the statement from the Lysol people and don’t ingest any of the cleaning agents in your cupboards or closets.

Let’s wish God’s speed to the real experts who are working on a vaccine.

5 responses to “Looking for a COVID Cure? Try Swallowing a Flashlight and Washing It Down with some Windex or Lysol”