“Time and time again President Trump and his Washington enablers have gone out of their way to hurt New York and other blue states whenever they can as punishment for refusing to fall in line with their dangerous and divisive agenda.”                           – New York State Governor Andrew M. Cuomo

If you are wondering why an online news and commentary site in Niagara, Ontario is posting yet another news release on Trump’s move to make it harder for law-abiding New Yorkers to gain access to services that make it easier to cross the Peace Bridge and other U.S./Canada border crossings, it is out of concern for what collateral damage this move could do to people and to economies on both sides of the border.

Trump has already shown hostility toward Canada. What else might he do to hurt relations between the two countries?

Who knows what further steps this erratic and vengeful president may take next?

Could he take steps that makes crossing a Canada/U.S. border that feeds countless billions of dollars in back-and-forth business each year to both countries even more difficult, if not impracticable or impossible?

The idea of Trump building a wall along the Canada/U.S. border to keep Americans fed up with him from leaving used to be more of a joke. But who knows? Perhaps, one day soon, he will threaten to do it.

It is also a border, by the way, that beyond the dollars and sense, that countless thousands of law-abiding Canadians and Americans cross each year to visit friends and family. And that matters too – to friends and families, and to the continuation of a healthy, friendly relationship between the two countries.

As anyone who has followed the madness of King Trump closely should know by now, never underestimate Trump and his willing enablers when it comes to piling one outrageous act on top of another.

We hope that it is not just New York State Governor Andrew Cuomo, Buffalo area U.S. Congressman Brian Higgins and mayors on county executives on the Buffalo and Niagara Falls, N.Y. side of the border who are responding to this.

Our leaders at the federal, provincial and municipal levels of government in Canada should at least be paying close attention to this too, with an eye to responding openly and firmly if it looks like the interests of Canadians are in danger. 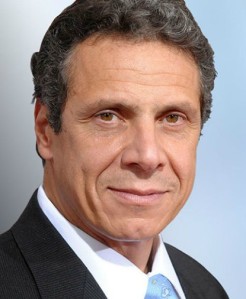 New York State Governor Andrew Cuomo has had a record of friendship and cooperation with provincial and federal governments in Canada, something we should be grateful for in this age of Trump.

The lawsuit which will be brought by New York Attorney General Letitia James, will argue that the Federal Department of Homeland Security has violated New York’s sovereign immunity, not provided our residents with equal protection and is acting in an arbitrary and capricious manner that denies the rights and privileges of all New Yorkers. Letitia James has also been defending challenges to New York’s Green Light Law.

“Time and time again President Trump and his Washington enablers have gone out of their way to hurt New York and other blue states whenever they can as punishment for refusing to fall in line with their dangerous and divisive agenda,” Governor Cuomo said.

“The Department of Homeland Security’s decision to ban New Yorkers from the Trusted Traveler Program is yet another example of this administration’s disrespect of the rule of law, hyper-partisan politics and use of extortion. There is no rational basis for this politically motivated ban, and we are taking legal action to stop the federal government from inconveniencing New Yorkers to score political points.”

Time and time again President Trump and his Washington enablers have gone out of their way to hurt New York and other blue states whenever they can as punishment for refusing to fall in line with their dangerous and divisive agenda.

(Listen to New York Governor Andrew M. Cuomo discuss this issue by clicking on the screen immediately below.)

“This is political retribution, plain and simple, and while the president may want to punish New York for standing up to his xenophobic policies, we will not back down,” said Attorney General James.

“We plan to take legal action and sue the Trump Administration for its unfair targeting of New York State residents. This new policy will negatively impact travelers, workers, commerce, and our economy, so we will fight the president’s short-sighted crusade against his former home. We will not allow New Yorkers to be targeted or bullied by an authoritarian thug.”

Cars and trucks lined up to clear homeland security on the U.S. side of the Peace Bridge joining communities Niagara, Ontario and Western New York

Under the Department of Homeland Security’s ban, residents of the State of New York will no longer be eligible to apply for or renew membership in U.S. Customs and Border Protection Trusted Traveler Programs. Such programs are operated by the Department of Homeland Security who independently verifies identity and citizenship, and DMV data and information is not necessary for such programs.

Read what The Buffalo News has recently published on this serious matter by clicking on – https://buffalonews.com/2020/02/07/as-border-disaster-looms-politicians-bicker-over-green-light-law/