The WNY (Western New York) for Bernie Team is holding a Fundraiser in Buffalo, New York on Sunday, February 9th, 2020 at 6 p.m.

If You You Are Still ‘Feeling The Bern’, Read Below for Details

A Call-Out from the WNY for Bernie Team

It’s an indisputable fact that Bernie won the popular vote in Iowa! Energy is high and the Bernie campaign just pulled in 25 million dollars in January. Lets keep the momentum going! 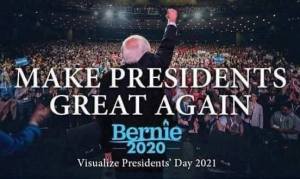 Well with great pride we are reaching out to you about the Fundraiser that is happening on this Sunday, February 9th starting at 6pm. It will be held at Milkies on Elmwood Ave. and will feature local musicians Laura Kerrigan, Justin DeCarlo, and Michael Farrow! [Facebook even link below.]

For the early attendees, the first twenty people through the door will get Free Stuff!

Stop by to meet up fellow Bernie supporters in the area, enjoy some great music, and participate in our raffles. All funds will benefit local grassroots organizing in the area in an effort to get Bernie Sanders elected as Democratic nominee!

In Solidarity, Bernie Team for NYW