This Fourth of July, America Seems More Lost Than Ever

A Beacon to the World No More

A Brief commentary by Doug Draper 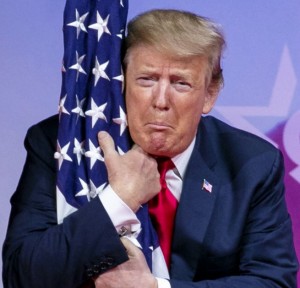 In front of an audience of hardcore supporters, hugging (or could he be mugging?) the American flag.

I am posting this with apologies to my many good friends in the United States, although maybe I don’t have to apologize.

I know that many of them are feeling more depressed and alarmed about the evil monster in the White House than those of us who at least have the comfort of viewing what is now going down in the once-proud land of  Abe Lincoln and Franklin Delano Roosevelt from the relative safety of another country.

For all of the bad and ugly in its history – slavery and racial segregation, the bloody and costly wars fought in far-off places like Vietnam and Iraq, the alarming rates of domestic gun violence and so on – America is, or at least was a land that spawned bigger-than-life leaders like Lincoln and FDR, and people who became heroes in my lifetime like Martin Luther King Jr. and Robert F. Kennedy.

And there were great testaments to the country and to what, at the best of times, its leaders and people worked collectively to strive for, like the one written by 19th Century Jewish American poet and activist Emma Lazarus, and immortalized on a bronze plaque at the base of the Statue of Liberty in New York Harbor. 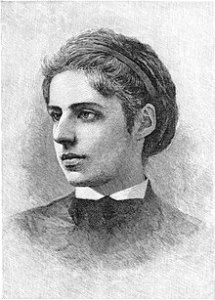 What would Emma Lazarus think now? What poem would she write about the plight of the migrants at the U.S./Mexico border?

“Give me you’re tired, your poor, your huddled masses yearning to breathe free, the wretched refuse of your teeming shore,” Emma Lazarus wrote of those, often fleeing poverty or turmoil in their homeland, to start a new life in America. “Send these, the homeless, tempest-tost to me, I lift my lamp beside the golden door!”

Now the monster in the White House has said these things about masses of poor and tired people fleeing hardship and violence in their own countries, and hoping to cross the border from Mexico for that same dream of a better life.

“They are bringing drugs, they are bringing crime, they are rapists,” he said at the start of his campaign for the U.S. presidency. Once in the Oval Office, he went on to dehumanize and tar them as an “infestation.”  He called them “bad hombres,” “terrorists,” “animals,” “trash” and worse, as the mobs at his rallies yelled things like; “F—k these dirty-beaners “and “Shoot them.” 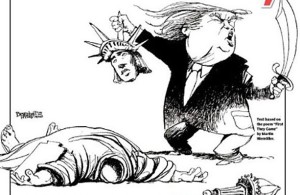 From the cover of the New York Daily News a few years back. So much for Lady Liberty.

This June, in the midst of reports about refugee children pressing up against glassed-in cages and crying for their parents when members of the U.S. Congress showed up to inspect the conditions they were detained in. There were reports of one adult detainee telling some of these Congressional members that there was no tap water and that U.S. border guards, told her and others to drink from a toilet.

And then there was this photo, this heart-wrenching image of a migrant father, Oscar Alberto Martinez, and his 23-month-old daughter, Angie Valeria – two people that the monster might otherwise call “animals” or “trash” – found drowned together as they tried crossing the Rio Grande River to the American side. 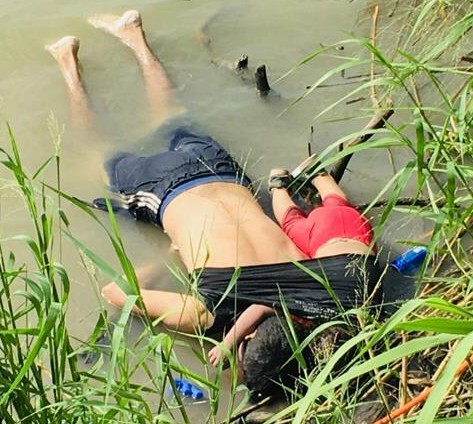 To humanize them, here is a photo taken of them when they were alive – 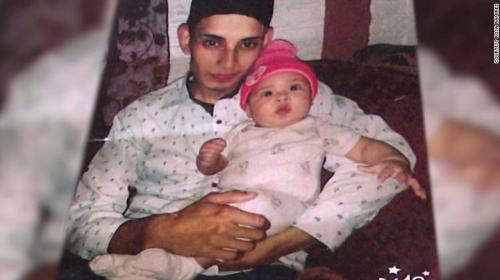 Though humanizing these poor, desperate people matters not to the monster and the creeps who work for him in the White House. One of these creeps, when shown video of a caged child during an interview on Fox News, noted that the child will probably only grow up to be a terrorist anyway.

This Fourth of July, the monster in the White House, who was a four or five times draft evader when his time came to serve during the War in Vietnam, is turning what is supposed to be a festive, national birthday celebration in the nation’s capital, into a show of military force, with heavily armored tanks on the ground and Air Force bombers and fighter jets soaring overhead.

Even Ronald Reagan, who was so often criticized for his massive spending on the military while he was President, settled for Frank Sinatra and The Beach Boys entertaining the thousands of people who gathered for the Fourth of July on the lawns of the Washington Mall.

Bringing the military hardware into Washington D.C. for the show of force he has reportedly been lusting for going back to his inauguration. What statement is he making with this to his country and the rest of the world?

On this Fourth of July though, as calls for his impeachment grow louder and as he accuses those leading up investigations into his conduct and financial affairs of being “traitors” and of attempting a “coup” against him, the monster is letting his inner tin-pot dictator all hang out. 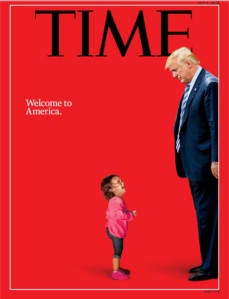 A cover of Time Magazine from 2018, depicting the standoff between Trump and migrants arriving from south of the Mexican border

As the day rolls on, he is expected to stand on the steps of the Lincoln Memorial where Martin Luther King once stood and delivered his history-making “I Have A Dream” speech. And by his very presence, he will desecrate this hallowed place, just as he desecrated a D-Day cemetery in Normandy, France on the 75th anniversary of the Second World War’s most decisive Allied invasion this past June 6th, with whatever vomit spews from his mouth.

How heartbreaking and disturbing this is for so many of the Americans I know. Yet millions of their fellow citizens, for reasons that seem to defy all logic, continue to cheer the monster on.

The following video, produced by The New York Times during the 2016 U.S. presidential election campaign, features “unfiltered” scenes from Trump rallies  and, fair warning, contains some disturbing language and behaviour. It was the newspaper’s decision to offer an uncensored portrait of how low things have sunk. Click on the screen below to watch –

To read a related commentary, titled ‘Trump’s War on Children is an Act of State Terrorism, written by McMaster University Professor Henry Giroux, click on – https://brighterworld.mcmaster.ca/articles/trumps-war-on-children-is-an-act-of-state-terrorism/

Here is a Global TV report from July 2 that focuses on ever-more disturbing developments along the U.S./Mexican border – https://globalnews.ca/news/5451967/us-border-agents-facebook-group/ .

For More News And Commentary From Niagara At Large – An Independent, Alternative Voice For Our Greater Bi-National Niagara Region – Become A Regular Visitor And Subscriber to NAL at Www.Niagaraatlarge.Com .

4 responses to “This Fourth of July, America Seems More Lost Than Ever”