News from the Chamber of Marine Commerce, an association that representing  more than 130 marine industry stakeholders and other  marine service providers in Canada and the United States 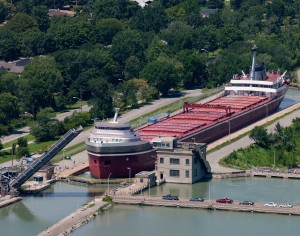 Canadian  ship owners and The St. Lawrence Seaway Management Corporation have spent an estimated $114 million on repair and infrastructure projects this winter, boosting the economic fortunes of communities throughout the Great Lakes, the St. Lawrence and east coast.

The St. Lawrence Seaway Management Corporation (SLSMC) allocated $35 million for infrastructure maintenance over the winter of 2017-2018. The work includes major upgrades to electrical systems and lock-related machinery and gates, in advance of the Seaway navigation season opening on March 29.

“Our steadfast commitment to maintenance and asset renewal enables the St. Lawrence Seaway to uphold its excellent record of system reliability, consistently registering above 99% year-after-year” says Terence Bowles, the SLSMC’s President and CEO. “Coupled with our modernization program, the Seaway is steadily advancing its competitiveness as a key gateway for international trade, linking the heartland of North America to markets across the globe”.

Canadian shipowners have invested an estimated $79 million to tune-up and upgrade their vessels during the winter months — an annual exercise that keeps their vessels in tip-top shape and on the cutting edge of marine transportation.

Vessel projects include engine and generator overhauls, steel and mechanical work, cargo belt repairs, navigation equipment and system hardware and software upgrades, safety and environmental equipment upgrades/certifications and various annual inspections.  Several vessels also had five-year dry dock inspections, which are required by Transport Canada and survey all aspects of the ship below the waterline. The work also includes the “Canadianization” of the Algoma Buffalo and Adam L., two vessels purchased in the U.S. by Algoma Central Corporation that are being re-flagged Canadian.

“Even when ships are laid up for the winter, the marine sector is helping sustain well-paying, skilled jobs by spending millions of dollars with Canadian equipment suppliers, repair businesses, ship yards, and ports,” says Bruce Burrows, President of the Chamber of Marine Commerce. “This significant investment also demonstrates our industry’s commitment to continuously improve and modernize our transportation network to the benefit of Canadian businesses and communities.” 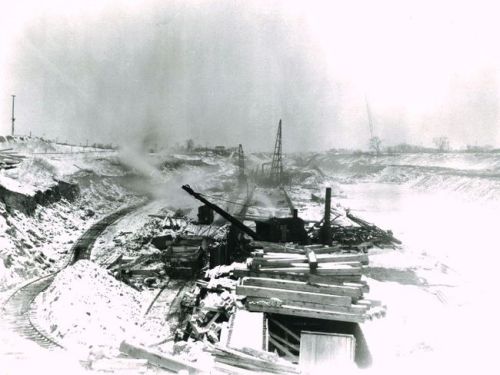 One of the major infrustructure projects of all in the St. Lawrence Seaway System – the contruction in the 1920s of the modern day Welland Canal

About the Chamber of Marine Commerce – The Chamber of Marine Commerce is a bi-national association that represents more than 130 marine industry stakeholders including major Canadian and American shippers, ports, terminals and marine service providers, as well as domestic and international ship owners. The Chamber advocates for safe, sustainable, harmonized and competitive policy and regulation that recognizes the marine transportation system’s significant advantages in the Great Lakes, St. Lawrence, Coastal and Arctic regions.

NIAGARA AT LARGE encourages you to join the conversation by sharing your views on the information in this post in the space below the Bernie quote.