Queenston, in Niagara-on-the-Lake, Ontario, Canada, May 21, 2014 – The Willowbank School of Restoration Arts is honoured to announce that HRH The Prince of Wales has agreed to become its new Royal Patron. The announcement was made on the occasion of The Prince’s 17th visit to Canada this May. 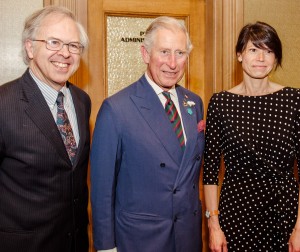 Willowbank, situated on the Canada-U.S. border near Niagara-on-the-Lake, Ontario, delivers post-secondary education in the crafting of new futures for old places.

The Prince met this May 21st with Julian Smith, Executive Director of Willowbank, and Lisa Prosper, Director of its Centre for Cultural Landscape, who are presenting on issues around sustainable urban growth at a meeting of urban designers, planners, developers and civic leaders convened by The Prince in Winnipeg, Manitoba.

Royal patronages reflect areas of personal interest to His Royal Highness, and for the School it means a link with his established initiatives, including The Prince’s Foundation for Building Community and The Prince’s School of Traditional Arts.

“This is a unique opportunity for Willowbank to align our activities in cultural heritage with the pioneering work and global leadership of The Prince,” said Mr. Smith, who heads the independent, non-profit institution where students come from across Canada and the world to enrol in a three-year diploma program.

“We are thrilled at the news,” said Dr. Christina Cameron, President of the Board of Directors, a group of distinguished Canadian and U.S. volunteers. “The Prince of Wales’s endorsement recognizes Willowbank’s innovative approach to the integration of heritage conservation, traditional craftsmanship and environmental studies.”

The School’s diploma program, set within a 13-acre National Historic Site, is unique in Canada for combining academic and apprenticeship learning, balancing working with the hands and working with the mind. Operating outside the normal structures of universities and colleges, Willowbank is positioned to break down barriers between designers and builders, and between traditional knowledge and contemporary practice. Graduates are finding immediate success across a range of careers, from skilled trades to design firms to community development.

“In attending Willowbank one begins to unlock the keys to sustainable communities,” said Walter Furlan, a 2012 graduate who is a heritage carpenter in Hamilton, Ontario. “That is why I chose to operate my business in one of the lowest socio-economic neighbourhoods in this province. By understanding the complex layers in the community, one can find the keys to resilience and self-reliance.”

In the words of third-year student, Angela Garvey, “Many people ask if Willowbank is about the study of old buildings. I’ve come to respond that we learn to appreciate buildings, neighbourhoods and landscapes, all that holds them together – from mortar to memory, and how time affects each.”

Founded in 2006, the School has grown rapidly into an institution of more than 40 students, with 50 faculty associates who are leading practitioners in the field. The associated Centre for Cultural Landscape provides a public forum for research, workshops, and conferences.

A selection of photographs and video footage, as well as Willowbank’s most recent annual report, is available at www.willowbank.ca/media.

An Afterword from Niagara At Large publisher Doug Draper – along with a congratulations to the Willowbank group, I can only wish that the late Laura Dodson, Margherita Howe and Peter Stokes, who helped keep this wonderful place from being demolished, were still here to enjoy this moment.