A Commentary by Niagara At Large publisher Doug Draper 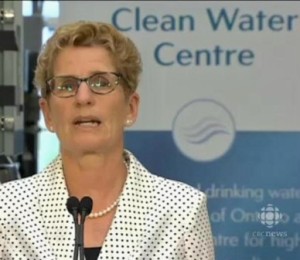 That was the response of Ontario Tory leader Tim Hudak and many of his partisan supporters after the province’s Liberal leader and Premier Kathleen Wynne visited the rural community of Walkerton this past May 15th and slammed Hudak’s promise to wipe out 100,000 public service jobs if his party wins this June’s election.

Walkerton, as every person eligible to vote in Ontario should know, is a town of 5,000 where, in May of 2000, seven people died and more than 2,000 others became sick when a deadly strain of fecal coliform linked to cattle droppings upstream contaminated a well of water used the local residents for drinking and preparing food.

At a Clean Water Centre the province established in Walkerton in the years following the disaster, Wynne warned an audience of supporters and town residents that Hudak’s public job cuts will affect public services.

In his ‘shame on Wynne’ for raising the specter of the Walkerton disaster response, Hudak went on to say this; “It’s rather sad to see the Premier of Ontario trying to take advantage of that for political gain.

As an environment reporter who covered the cutting of staff and programs by the former Tory government of Mike Harris – a government Hudak was a member of and eventually serviced in cabinet – I think it is important that Wynne raised the Walkerton tragedy as an example of what service cuts can lead to before we Ontario votes go to the polls this June. In fact, she beat me to the punch because I was planning to raise it on this news and commentary site in the last week before the June 12 vote.

And why? Because here we have a Tory leader who was an enthusiastic member of the Harris government now promising to gas more than twice as many public sector jobs than Harris did during his so-called ‘Common Sense Revolution’.

Hudak says none of those job cuts will target police, firefighters, or doctors and nurses. So where are they going to come from. Education is one area the Tory leader said he will target if he becomes the next premier, but all those cuts can’t come from schools or there wouldn’t be much of a public school system left worth sending our children. That leaves services like environmental protection, food inspection and others like that to pick on.

I was covering environmental fulltime for a newspaper in southern Ontario when Harris took out his meat axe and slashed the budgets and staffs of ministries like environment and natural resources by about a third. At the same time, he compromised or completely eliminated policies and programs for safeguarding such vital resources as drinking water.

The cuts included closing down Ministry of Environment laboratories where ministry inspectors could send samples of water from various municipalities for testing to determine how they measured up to samples municipalities were sending to private laboratories. If the samples sent to the ministry labs found contamination that the private labs possibly didn’t, the results would immediately be reported to a municipality’s public health chief who the authority to take action, up to and including issuing orders to residents to boil their water or, depending on the severity of the risk, not use it for drinking or preparing food at all until the contamination was addressed.

On top of all this, Harris (who, by the way, has continued to support Hudak, up to and including embracing him on stage during the last couple of leadership conventions) buried rules the province’s Ministry of Natural Resources was putting in place to keep livestock a safe distance back from rivers and streams so feces that contain the kind of e coli that polluted the Walkerton well is less likely to enter the water.

When I raised all of this in columns I wrote for mainstream newspapers following the Walkerton disaster there would typically receive be letters to the editor from Harris and Hudak partisans that the real blame for all of the deaths and sickness in Walkerton belonged to two brothers – Stan and Frank Koebel – hired by the town to run its water treatment system. Not only were they not qualified for the job, they went so far as to falsify water test results to make it look like everything was fine.

But those two guys never would have got away with what they were doing if the Harris/Hudak juggernaut had not torn to tatters a fail-safe system for monitoring municipal water supplies in Ontario that had been built and improved upon by the former provincial governments of Bill Davis, David Peterson and Bob Rae.

To quote a few lines from the key findings of an independent commission that conducted a lengthy pubic inquiry into the Walkerton tragedy; “The provincial government’s budget reductions led to the discontinuation of government laboratory testing services for municipalities in 1996. … The provincial government’s budget reductions made it less likely that the MOE would have identified both the need for continuous monitors at Well 5 and the improper operating practices of the Walkerton PUC.”

The commission report recommended dozens of new rules and regulations that all municipalities across the province must now follow as a result of this deadly mess. One might make a case that some of these rules and regulations are a bit over the top, but that hasn’t stopped one of Hudak’s own Tory caucus members from politicizing the Walkerton disaster – if that’s what Hudak wants to call any recent references to this disaster – to argue in favour of another Harris-like gutting of “red tape.”

“Water safety regulations imposed after the Walkerton disaster have become burdensome because of government red tape, warns Progressive Conservative MPP Lisa Thompson in a story posted by The Toronto Star this past March.

“The reality is municipalities, for example, have a lot of responsibilities now in terms of water testing,” Thompson said at a Queen’s Park news conference she held to talk about getting rid of red tape.

“Municipalities, their expenses are going through the roof because of regulation after regulation that is being introduced . . . . And I am going to leave it at that,” Thompson said.

“Sometimes in the house (legislature), when people are trying to justify regulations, they throw out the name of ‘Walkerton’ as if it is a bad thing. A tragedy did happen but we are moving forward.”

One should wonder how much the families of the seven people who died and the many others still suffering from chronic health burdens due to a catastrophe in that town that could have been prevented are “moving forward.”

Let me leave most of the final words to a former Walkerton resident who lived in the town during the disaster and responded to that March, 2014 Toronto Star story.

“I lived there. I drank the water. Each day the simple greeting of “How are you this morning?” took on new meaning and urgency…we REALLY WANTED TO KNOW. She never lived there. She has no idea. The anger here towards Harris & her ‘party’ has not relented.”

To that I say Amen, and if you vote for Hudak in this election, God help you and whatever services you count on for safety and a decent quality of life through every lap around the track from your child’s education through to your senior years..

Consider the very real possibility that if Hudak becomes the next premier of Ontario, you may get a bit of a tax cut – yup, yup, yup, that is the bait he, like former boss Harris, is throwing out as a loaf of bread for you. But as far as your services are concerned, you may very well be on your own. And please don’t cry out to those of us who won’t vote for this warmed over bullshit from the Harris era for any pity.

You are on your own!