Forty-five years ago this Thursday, April 4, Martin Luther King was shot and killed in Memphis, Tennessee. 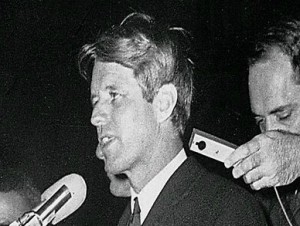 Robert Kennedy speaks to gathering of people in a neighbourhood in Indianapolis, Indiana on the eventing Martin Luther King was assassinated

That same evening, Robert F. Kennedy, a U.S. Senator for New York, brother of the late, assassinated President John F. Kennedy and a candidate running for president on a stop-the-war-in Vietnam ticket, addressed a crowd of people in a predominantly black neighbourhood in Indianapolis, Indiana to share the terrible news.

Kennedy’s handlers urged him not to venture out that night since word of the assassination was already spreading and violence was breaking out in some cities across the country. Kennedy insisted on going anyway and the words he spoke that evening were unrehearsed and are still regarded as one of the most moving addresses delivered by a political figure on this continent in the past 50 years.

Two months later, Robert Kennedy would, himself, be assassinated after delivering another speech to campaign supporters in Los Angeles, California.

On a week when we are mourning the death of Peter Kormos, a Niagara, Ontario politician who delivered his own share of off-the-cuff addresses that stirred listeners, I am sure he would have counted this April 4, 1968 talk by Robert Kennedy as one to embrace for its call for peace and justice for all.

Martin Luther King dedicated his life to love and to justice between fellow human beings. He died in the cause of that effort. In this difficult day, in this difficult time for the United States, it’s perhaps well to ask what kind of a nation we are and what direction we want to move in. For those of you who are black — considering the evidence evidently is that there were white people who were responsible — you can be filled with bitterness, and with hatred, and a desire for revenge.

We can move in that direction as a country, in greater polarization — black people amongst blacks, and white amongst whites, filled with hatred toward one another. Or we can make an effort, as Martin Luther King did, to understand, and to comprehend, and replace that violence, that stain of bloodshed that has spread across our land, with an effort to understand, compassion, and love.

For those of you who are black and are tempted to fill with — be filled with hatred and mistrust of the injustice of such an act, against all white people, I would only say that I can also feel in my own heart the same kind of feeling. I had a member of my family killed, but he was killed by a white man.

Even in our sleep, pain which cannot forget falls drop by drop upon the heart, until, in our own despair, against our will, comes wisdom through the awful grace of God.

Thank you very much.

You can watch a video of Robert Kennedy’s address by clicking on http://www.youtube.com/watch?v=5svX3eRyQPc .

(Niagara At Large invites you to join in the conversation by sharing your views on the content of this post below. For reasons of transparency and promoting civil dialogue, NAL only posts comments from individuals who share their first and last name with their views.)