The billboard at the site for the so-called new South Niagara Hospital – interestingly enough called the Niagara Falls Hospital here – located near the Thundering Waters Forest and its signficant wetlands in the Niagara River watershed that might very well be gutted for urban development when this hospital goes in at this location. This cutline is a comment by NAL reporter Doug Draper and not Niagara Health

Niagara, Ontario – Following thorough discussions at Niagara Region’s Budget Review, Committee of the Whole meeting on June 17th, financial commitment was approved, dependent on final budget approval. Payment of the local share portion will follow the opening of the new hospital, and over a several year payment period through tax levies.

The local share is the portion of funding for which a hospital is responsible. Hospitals are responsible for 10 per cent of the eligible construction costs of a new build and 100 per cent of the costs associated with the purchase of new and replacement furniture, fixtures and equipment. 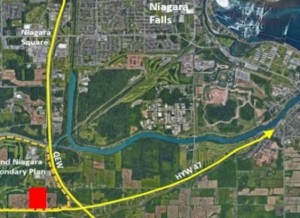 The block of red in the lower left hand corner is where the new hospital would go. A large patch of green further to the middle is the Thundering Waters Forest. A China-based corporation called GR is working to take Thundering Waters down, and has the support of Niagara Falls Mayor Jim Diodati and a majority on his city coouncil.

The Province of Ontario will fund the majority of the new hospital project, with the local community and Niagara Health responsible for funding the local share portion, approximately $212 million. The local share breakdown is based off completed feasibility studies and recommendations by cost consultants working alongside Niagara Health.

The South Niagara hospital project remains on schedule with the request for proposals set for release in early fall.

“We are sincerely appreciative for the support from Regional Council and the commitment from Niagara residents. The commitment from our regional and municipal leaders sends a message to the Ontario Government that Niagara is supportive and ready to move ahead with the next exciting milestone.” – Bunny Alexander, Board Chair, Niagara Health

“The commitment made by Regional Council is a fundamental step toward in the realization of reaching our funding goal, and ensuring that the residents of Niagara have access to the state-of-the art healthcare they need. Although a significant commitment, there is still much work to be done, including the upcoming launch of the Niagara Health Foundation’s fundraising campaign.” – Lynn Guerriero, President and Interim CEO, Niagara Health

“The South Niagara hospital project is an essential purpose built facility that will form the acute care hub in our strategy to look after older persons. We have learned over the course of this pandemic the importance of infection, prevention and control measures. This facility will undoubtedly position us well in our daily operations, and in managing potential future pandemics.” – Dr. Johan Viljoen, Chief of Staff

The South Niagara hospital project continues to move through the Ministry of Health’s five-stage planning process for building a new health infrastructure in Ontario.

The project will be delivered as a P3 (Public-Private Partnership) model. Find out more about P3s here.

Construction of the new site is expected to begin in 2022 with completion estimated for 2026/2027.

For more information on the South Niagara Project click here.

A Brief Footnote from Doug Draper at Niagara At Large–

The days of Provincially Signficant Wetlands wetlands like this one in Thundering Waters Forest in Niagara Falls, Ontario could be numbered if the Region does not approve strong enough rules to protect what is left of our natural heritage and water resources.

Just as the building of Niagara Health’s mega-hospital on the outskirts of St. Catharines western boundary unleashed a firestorm of urban development on what was left of the orchards and other farmland there, this so-called South Niagara hospital in the south-west corner of Niagara Falls, will unleash development there.

That development will most likely include the ultimate gutting of the more than 400 acres of woodlands and provincially significant wetlands that make up the Thundering Water Forest, located in between the proposed hospital site and already built-up areas of Niagara Falls in the vicinity of the Marineland amusement park.

So goodbye Thundering Waters Forest, I am afraid, and few on either side of the Niagara River border will know what a critical loss that feast of wetlands means to the river’s watershed and to millions downstream around Lake Ontario.

In my view, the Thundering Waters Forest needs a voice.

Where is a critical mass of citizens in the name of something like “Friends of Thundering Waters” to consistently  speak out for this precious place.

The answer is there is not such a group dedicated to saving this wonderful place and that is a serious problem. It makes it easier for the developers and their enablers to simply move forward with their plans.

More on this later. Stay Tuned