Another multi-lane highway in Ontario “means more car-dependent communities with high carbon footprints, and more people exposed to damaging air pollution. This is the opposite of the healthy future Ontarians want and deserve.”

A News Release from Environmental Defence, a citizens advocacy group for our protecting and preserving our natural heritage 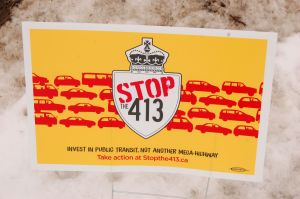 Toronto, Ontario. – Ontario’s proposed Highway 413 will increase transportation emissions in the province, escalate suburban sprawl alongside the highway, and cause billions of dollars in damages from heightened air pollution in nearby communities.

Environmental Defence teamed up with Eunomia Research & Consulting to calculate that the vehicles using Highway 413 will add up to 700,000 tonnes of greenhouse gas emissions annually, leading to a cumulative total of 17.4 million tonnes of emissions by 2050, assuming today’s vehicle mix remains unchanged. This is more pollution than the entire City of Toronto emitted in 2018.

“Transportation emissions have been rising in the GTHA for years,” said Sarah Buchanan, Ontario Climate Program Manager at Environmental Defence. “The province’s plan to build the multi-billion-dollar Highway 413 will make this worse by putting more cars on the road. Ontario’s climate change targets to reduce emissions are already a distant hope, but encouraging more driving and suburban sprawl will make them completely unattainable.” 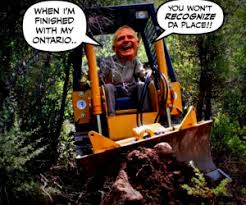 Scientists stress that to avoid climate catastrophe we must reach net-zero emissions by 2050. But building Highway 413 locks Ontarians into a high-carbon future where more people are encouraged to drive, and more sprawling subdivisions and strip malls replace valuable farmland and green spaces.

Ontario can take the path towards net-zero by scrapping this highway and prioritizing affordable, accessible public transit, and walkable, bikeable, communities in all corners of the GTHA.

Building a new 400-series highway would also mean direct health impacts on nearby communities. The risk of premature death from respiratory illnesses like asthma or lung cancer skyrockets for people who live close to a highway or major road. 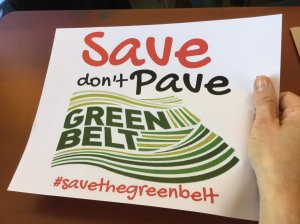 Our modelling shows that Highway 413 could cause up to $1.4 billion dollars in cumulative damages from air pollution by 2050. These damage costs will increase more quickly if developers build more suburban sprawl close to the highway, exposing more people to air pollution.

“This highway has been rightly called a sprawl accelerator. 30 years after the under-used Highway 407 was built, much of the farmland near the highway was converted to sprawl.

We can expect the same to happen to the land near Highway 413. This means more car-dependent communities with high carbon footprints, and more people exposed to damaging air pollution. This is the opposite of the healthy future Ontarians want and deserve. It’s clear that the province must cancel Highway 413,” added Sarah Buchanan.

Here is the proposed route, going back to the 1990s, for a mid-peninsula highway that could potentially ,mean the death of countless thousands of acres of farmland and natural areas in Niagara. There are still at least a few politicians at all levels of government that back this multi-billion-dollar highway bombshell now.

Believe it or not, we still have at least a few politicians at the federal, provincial and possibly municipal level in Niagara that want to build a super highway like the proposed Hwy. 413 often identified as a “mid-peninsula highway –  through the heart of Niagara’s farm country above the Niagara Escarpment.

As we get past this pandemic and continue to face a growing climate mergency, we can’t afford politicians who remain stuck in the 20th century like this.

These politicians need to be replace with individuals with a firm eye to the challenges we face in the 21 century.