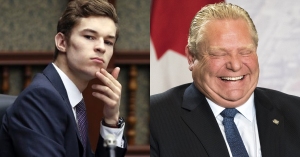 This past March 29th, Ontario Premier Doug Ford, his young minion, Niagara West MPP Sam Oosterhoff, and other Conservative Party hacks staged a photo opportunity in front of the Horseshoe Falls in Niagara Falls, Ontario for reason – I am sure – most people don’t give a damn about any more.

While they were doing this, it was already obvious that thanks, in part, to the poor leadership of Ford, Oosterhoff and company, Ontario was in a Third Wave of the COVID-19 virus, that is spinning out of control, with variants of the virus landing more people in critical hospital care than at any other time since the winter of 2020, when this plague first hit here.

On the other side of Ford’s and Oosterhoff’s self-serving photo-op. here is some of the reality others out here are suffering

To add to what made this March 29th photo op in Niagara Falls so gut-wrenching, there was young Oosterhoff, who only months ago joined a mask less gathering of relatives and friends at the nearby Betty’s Restaurant, where the staff tried asking them to respect the mask rule, walking up to the podium, singing praises for his dear leader Ford.

It all adds up to one more of countless reasons, this aging watcher of governments believes, why so many people say they have zero respect for politics and for politicians anymore.

I don’t know who the good people were that produced the following satirical piece on that photo op in Niagara Falls, but I salute them because it is right on. 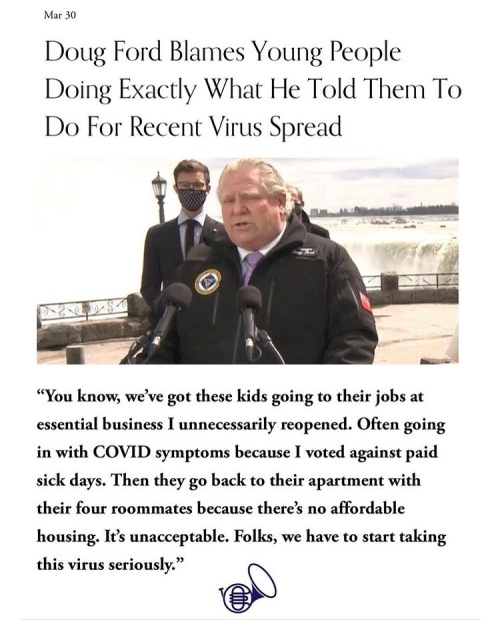 To watch a gut-wrenching video of that March 29th photo op at Niagara Falls, click on the screen immediately below –

Finally, here is a photo of Niagara West MPP and Ford government member Sam Oosterhoff and company so arrogantly flaunting the mask rule last year at the popular family restaurant, Betty’s, in Niagara Falls This little twit, as home schooled as he was,  continues to serve as the Ford government’s assistant to the Minster of Education. What a role model for our kids he is. – 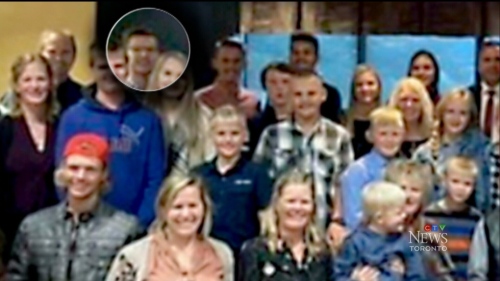 Yes, that is Niagara West MPP and Ford hack Sam Oosterhoff  (in the circle) at Betty’s Restaurant in Niagara Falls, Ontario last year in a photo that includes some, but not all of his equally disrespectful friends.