A Brief Foreword by Doug Draper, a veteran environment reporter and publisher of Niagara At Large –

I can understand why any news that Niagara’s Regional Government is in the process of updating its Official Plan may not bring a tingle to very many fingers.

An Official Plan process? Seems pretty boring, right? It sounds like he kind of thing that someone would only get their rocks off on if they were a policy wonk.

But revising Niagara, Ontario’s Official Plan is a a very huge deal in that it sets the guidelines and rules for how our communities across this region grow for decades to come.

The very economic and environmental health of our communities, for generations to come, can and will be impacted on how our municipal, provincial and federal governments lay plans for how our communities grow.

That is why the following letter, addressed to Niagara Region’s Council and signed by an unpredendented number of citizen groups and individuals across Niagara, is so important.

The fact that the number of individual citizens and groups in Niagara – many of them supported by countless hundreds, and in some cases, thousands of citizens, signed this letter should not be surprising. 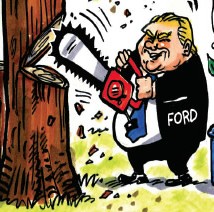 They, along with the rest of us, watched over the past decade, as politicians and bureaucrats at the local Niagara level hijacked our bodies of government for the interests of their friends in the development industry which, in the case of Niagara, sports the worst of the worst around not giving a damn about protecting what is left of our natural heritage.

They have also followed a current Ford government in Ontario push forward with plans to pave over what Premier Doug Ford has called “chunks” of what are left of our green places.

Why would anyone who has watched this Ford government at work around weakening and gutting safeguards for protecting our natural resources want to see it in charge of approving any Official Plan for our communities’ future?

Better to wait until – hopefully – this Ford government is swept out of power in the spring of next year.

I therefore urge you to read this letter and get engaged yourselves, if you are not already, in setting a plan for a healther future for all of us.

Now here is the letter to our Niagara Regional Council –

How much further into good farming lands, our wooded areas, our wetlands and other natural heritage lands do we have to cover over with low-density sprawl? Ford and his greedy, predatory pals in the development industry have got to be stopped from rolling on with more of this.

As you are aware, the province has revised municipal planning guidelines to include population projections to 2051, lowered density targets for new development and enacted a “market-driven” approach to planning for new residential.

We are requesting that Niagara Region follow the lead of the unanimous February 17th 2021 vote of Halton Regional Council and vote to delay finalizing the Region’s Official Plan review. Niagara Region should join with Halton in asking the Province to suspend the timetable for municipal conformity to the Growth Plan and the Provincial Policy Statement as well.

She can be contacted at janefogal@haltonhills.ca

We have attached her successful motion from Halton with this email.

As citizens of this Region we believe this action is necessary for the following reasons:

Future generations may very well thank us some day if we work to protect and preserve more of this.

·      We must not lock in sprawl until 2051. We cannot afford to lose more agricultural land and more natural areas to low-density residential development when adequate land is available to develop complete, self-sustaining communities until 2031, and possibly to 2041, using the guiding principles of Places to Grow.

·      Low density residential development is an economic disaster, as well as an environmental one. Our current infrastructure deficit will only grow as we continue to build out into greenfields, constructing new roads, water and sewer infrastructure and all the public services that citizens need but that existing taxpayers cannot afford, especially when what we are building is residential development without the commensurate industrial development that would both provide jobs and the higher tax rate needed to support new communities.

·      In Niagara, an area with the best farmland in the country, we need to protect our vibrant agricultural, viticultural and tourism industries.

·      COVID has significantly changed the way we live, work and play. Some of these changes, including how and where we work, are expected to be long lasting. As we are still in the midst of the pandemic, there has been no opportunity to analyze what these impacts may be and how they may affect urban planning. Data should drive decisions, not developer’s desires.

·      We cannot reduce and mitigate the impacts of climate change by encouraging sprawl. We cannot prevent floods with more hard surfaces and loss of green infrastructure. We cannot keep our communities shaded and cool without trees. We cannot meet carbon reduction targets by building more roads and highways. As, Yuill Herbert, a leading energy consultant for many Canadian municipalities says, land use planning is the key lever in locking in or locking out greenhouse emissions. This is especially important in light of a study, released on March 2nd 2021, and reported on in the Toronto Star, that showed carbon emissions in the Greater Toronto and Hamilton area have been steadily rising since 2015. To avoid catastrophic climate change we must *reduce *our carbon emissions not continuously increase them through bad planning.

·      Constituents cannot be properly consulted given COVID restrictions.Many residents do not have internet access or lack the expertise to use Zoom software in order to delegate. Critical decisions which will impact Niagara for the next 30 years, should not be made while in-person consultation is impossible.

For these reasons we ask the Region of Niagara to follow Halton’s lead and delay the finalizing of Niagara’s Official Plan review and ask the Province to suspend the timetable for municipal conformity to the Growth Plan and the Provincial Policy Statement.

Sincerely, *Group members of the Collective:*

*Individual Members of the Collective:*

Here is the full text of the motion passed unanimously by Halton’s Regional Council at its February 17thy, 2021 council meeting –

this brave motion, tabled by Halton Regional Councillor Jane Fagul, was ultimately approved this past February by the whole regional council.

WHEREAS the Province of Ontario has mandated Halton Region to conduct a municipal comprehensive review (MCR) of its Official Plan whereby decisions must be made as to how all of the population and employment growth is to be accommodated in the local municipalities for the years 2031 to 2041;

AND WHEREAS since June 2019 the Province has amended a number of Provincial Statutes and policies that impact how municipalities plan for growth including the following:

AND WHEREAS these significant Provincial changes include:

•             setting minimum population and employment growth forecasts that can be exceeded subject to Provincial approval,

•             introduced market demand as a consideration in determining the housing mix, and

AND WHEREAS these Provincial changes signal an abrupt shift from the emphasis on creating compact and complete communities to a planning regime that facilitates lower density and car dependent communities;

AND WHEREAS Halton Hills, Burlington, Oakville, Milton and Halton Region have all declared climate change emergencies and must consider the role of land use planning in their strategies to reduce their greenhouse gas emissions;

AND WHEREAS these Provincial changes create pressure to convert more class 1, 2 and 3 farmland in Halton to urban uses than would otherwise be necessary which is contrary to Halton’s Official Plan and its 2019-2022 Strategic Plan, which both have as a goal to protect a permanent agricultural system in Halton;

AND WHEREAS ensuring that Ontarians have access to healthy safe food in the future requires thoughtful consideration of the long term impact of converting thousands of acres of prime agricultural lands in the Greater Golden Horseshoe to urban uses;

AND WHEREAS in 2016 Halton Regional Council directed the Regional Chair to write to the Premier of Ontario expressing support for creating a provincial permanent agricultural system;

AND WHEREAS the change of the planning horizon to 2051 by the Province means that future municipal councils and the public will have little power to change decisions where they will grow after 2031 to the 2051 planning horizon;

AND WHEREAS in the rural areas internet service is often poor, making it difficult for rural residents to participate in zoom calls.

AND WHEREAS Halton Region has adopted a public engagement charter that is based on transparency, notification and participation;

AND WHEREAS the nature of work has evolved in response to the pandemic which may cause long term changes to the assumptions underlying the province’s Land Needs Assessment.

NOW THEREFORE BE IT RESOLVED THAT Regional Council direct the Regional Chair to write to request the Province to allow the Region to delay its final report on its Official Plan Review until proper, in person, informed consultation with the public has been conducted on the growth concepts and the preferred growth concept;

AND FURTHER THAT the Province be requested to make ROPA 48, being the scoped Regional Official Plan Amendment which identifies non-discretionary components of a Regional Urban Structure that support local plans and priorities inside the current urban boundaries, exempt from the requirement for in-person consultation with the public;

AND FURTHER THAT the Province be requested to suspend the timetable for municipal conformity to the Growth Plan and the Provincial Policy Statement to ensure that the public can fully participate in the process of planning their communities for the growth planning period covering 2031 to 2051;

AND FURTHER THAT the Province suspend the deadlines it has set for conformity until the Land Needs Assessment Framework can be revisited to adjust to the significant changes to the nature of work that are reducing office space and parking space needs.

AND FURTHER THAT this resolution be circulated to Premier Doug Ford, the Honourable Steve Clark, Minister of Municipal Affairs and Housing, Halton’s Local Municipalities, the Association of Municipalities of Ontario, the leaders of the Provincial opposition parties, Halton’s MPP’s, and the Greater Golden Horseshoe municipalities.

Finally, here is a commentary on this issue written by Halton Regional Councillor Jane Fogal, who tabled the above motion. That commentary was posted on Niagara At Large ….. https://niagaraatlarge.com/2021/03/04/a-sprawling-disaster-doug-fords-plan-for-ontario/