As the blades of the helicopter began to turn – to lift Trump and his pole dancer of a “first lady” off the south lawn of the White House for the last time this morning of January 20th – Willie Geist, a co-host of the MSNBC news program ‘Morning Joe’ said (and I just slightly paraphrase); ‘He is about to fly over the capital (Washington, D.C.) that he, in so many ways, has wrought so much destruction over.”

Just do the world a favour and go away! Trump leaves the White House, for the last time as U.S. president, with the Washington Monument looming the background

Indeed, make that the damage destruction he has done to his country and the world, when you think of what he has done to public institutions, to the environment, to the relationships between peoples and countries, and the list could go on and on.

So good riddance to him and to his crime family.

Before leaving for the last time on Air Force One, on his way to his gaudy Shangri la in Florida, Trump, as bullies and creeps often do, had to send out one more taunt to the world. 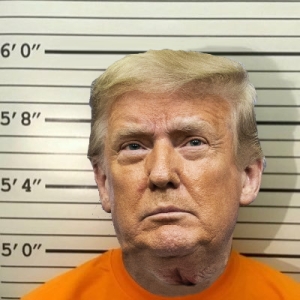 The way that I, and I am sure countless millions of others, want to see him if he ever returns to his nation’s capital again

“I will be back in some form,” he told a small gathering of followers in his death cult before finally boarding the plane.

To which I say, God’s Sake don’t, unless it is in the form of an ex-president wearing orange pyjamas, to sit in a federal courtroom on charges of inciting acts of sedition against the democratic workings of the country who pretended to make so great again.

Now let us all toast the inauguration of a new U.S. president and vice-president, and wish them all of the best in cleaning up this mess the orange monster has left behind.

They are certainly going to need the good wishes and support of all of us.

A cartoon depicting the mess that awaits American’s 46th president, Joe Biden, when he takes office