Anti-Mask Screwballs in Our Midst Are Endangering Us All

A Commentary by Niagara At Large reporter and commentator Doug Draper 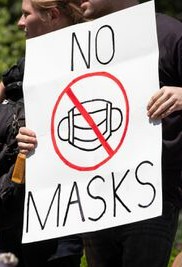 How disturbing it was to log on to a general meeting of Niagara Regional Council this past September 17th and see some seven or eight residents from across the region, spouting just about every screwball argument out there against wearing masks as a protective measure during aCOVID-19 pandemic that is continuing to cause so much sickness and death, as well as emotional and economic pain.

Something close to an hour and a half of our Regional Council’s time was taken up listening to this bunch question everything from the effectiveness of face coverings and whether this virus constitutes a heath emergency at all, to a spouting of libertarian gibberish about what a gross assault mask by-laws are on our individual freedoms.

Freedom is Essential? So is your life and the lives of others! A recent anti-mask protest in the Toronto area, where daily COVID-19 cases are spiking back to spring-time levels.

About the only thing missing in the so-called “presentations” these people delivered to our elected representatives was a suggestion that we drink bleach or shoot up Lysol.

My first thought as I listened to all of this Trump-like nonsense was why is our Regional Council offering any more time to this than most of us would to some nut bar yelling this stuff from a soapbox in a park?

What’s on the agenda for the next council meeting? Another seven or eight characters still trying to convince the world that smoking cigarettes doesn’t cause lung cancer?

Upon asking these questions to a representative of the Region’s council, I was told that according to the rules in place for delegations, these citizens had a right to a maximum of 10 minutes each to address councillors.

And that – for better or worse – is true. Yet how disturbing it is – at a time when you barely ever hear this many area citizens taking up this much time at a Regional Council talking about the need for more public transit, or for stronger rules to protect what is left of Niagara’s natural heritage – that this many people turn up to argue against wearing masks as one of a number of relatively simple steps we can take to reduce the amount of sickness and death during this pandemic.

How disturbing it is too to have a mayor of one of the 12 local municipalities in Niagara – Mayor David Bylsma of West Lincoln – recently going on a Facebook page for one of these crazy anti-mask groups out there – a group called ‘Hugs Over Masks – and throwing his lot in with the anti-maskers. 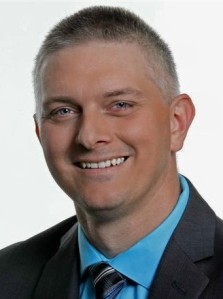 West Lincoln Mayor David Bylsma. Why show leadership when you can simply follow along with your anti-mask constituents

“Figured I better get dialled in to my constituents,” Bylsma wrote on the Facebook page. Really? Does the mayor have that many constituents in his municipality who have problems with wearing masks while sharing indoor space with other people?

Remind me not to do any shopping in West Lincoln. I don’t think I am interesting in hugging anyone who is against wearing masks either.

Indeed, these days, with daily COVID-19 cases climbing again  in Ontario and other regions of the country, and with infectious disease experts now warning us that, if we are not careful, we could be in for a second wave of Coronavirus that is worse than the first, I don’t think it is a good idea to do any hugging at all.

So please cut with all of the alt-right, Donald Trump and phony libertarian crap. Real libertarians are off the grid. They live out in the woods and they don’t use our public roads. 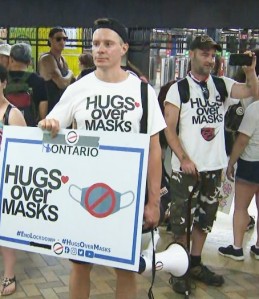 Some young ‘Hugs Over Masks’ protesters in the Toronto area where statistics now show that a majority of people now testing postive for COVID-19 are under the age of 40. And even if they don’t die from it, they risk infecting older members of their families who are more likely to die from the virus.

This is the most lethal pandemic the world has faced since the so-called ‘Spanish Flu’ of a hundred years ago. We recently passed a grim milestone of one million COVID-19 deaths globally.

Our American neighbours recently passed the 200,000 deaths mark, and while Canada’s death count is, per capita, not that horrific, it is still tragic for every live lost, and it is continuing to grow.

Wearing a mask in indoor places we share with others and social distancing are among the simple things we can do that most reputable health experts around the world agree can make a difference until this nightmare is behind us.

It is not about an assault on our liberties and freedoms. It is about doing something to protect ourselves and each other.

It is about putting ourselves out, just a little, for the common good of all – something anti-mask crackpots like Bylsma apparently will not or can not  grasp.

As for West Lincoln’s Mayror Bylsma, if this nitwit wants to go along with the views of what he suggests is the bulk of the resident in his municipalities believe about taking precautions against this virus, then fine.

Just get the hell out of the face of the rest of Niagara Region with these reckless and irresponsible ideas.

I would be all in favour of our Region, at this point, cutting West Lincoln off as a partner municipality and let it do whatever it wants – ON ITS OWN!

Niagara mayors and Niagara Regional Chair Jim Bradley at a signing ceremony this past September 18th. for an agreement among municipalities across Canada to embrace racial and cultural inclusivity. If you look, real close, West Lincoln Mayor David Bylsma, second from left and toward the back,  is the only municipal leader not wearing a mask. When this event was organized, reporters attending it were asked to please where a mask. But not this moron from West Lincoln. What a model Bylsma is for the rest of us.No responsibility to show leadership here. 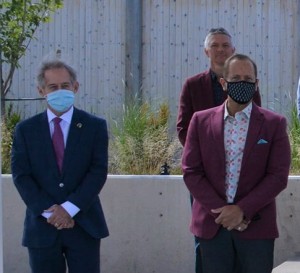 If you had trouble seeing the mask-less West Lincoln Mayor David Bylsma in the above group shot, here he is in a blow up, second from left, with Fort Erie Mayor Wayne Redekop and St. Catharines Mayor Walter Sendzik in front. What a disgusting example this man – who should be a municipal leader –  sets for the rest of us at a perilous time like this when we may be facing an even more deadly second wave.

Given your views on Black Lives Matter, on raising a flag as an expression of inclusivity on Pride Month, on Climate Change and the environment, and on the need for us all to show collective responsibility to protect ourselves from this deadly virus, I would be glad to see the back of Mayor Bylsma and the screwball constituents he represents.

Let’s cut these nuts these COVID-19 deniers in West Lincoln off and send them packing from our Niagara Region.