News from Environmental Defence, a Canada-wide group dedicated to protecting the environment, followed by a Footnote by Doug Draper at Niagara At Large

From left to right, Conservative premiers and fellow cowpokes Doug Ford, Jason Kenney and Moe Scott are all in on fighting Ottawa’s move to put a price on carbon pollution. They are using our tax money to take their 20th century war for the continued dominance of carbon fuels all the way to Canada’s Supreme Court

Toronto/Ottawa, Ontario – On September 22 and 23, the Supreme Court will hear challenges from Alberta,Ontario and Saskatchewan to the (federal Liberal government’s) 2018 Greenhouse Gas Pollution Pricing Act , along with over 25 intervenors challenging or defending the Act.

Environmental Defence is one of the intervenors defending the Act, which puts a levy on the use of fossil fuels in those provinces that do not have their own pricing system. We will be represented by the Canadian Environmental LawAssociation.

Environmental Defence previously intervened in the hearings in Ontario and Saskatchewan, where the rulings upheld the 2018 Greenhouse Gas Pollution Pricing Act . 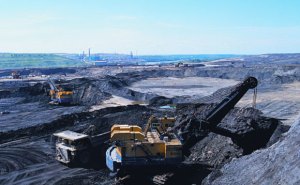 If you need any proof that today’s breed of federal and provincial Conservative Parties in Canada have not got it in their DNA to care about protecting the earth’s environment, look no further than the ongoing efforts by Conservative Premiers Doug Ford of Ontario, Jason Kenney of Alberta and Scott Moe of Saskatchewan to spend tens of millions of dollars of our tax money trying to strike down in the courts the federal Trudeau government’s Greenhouse Pollutoin Pricing Act.

This landmark legislation for Canada – already on the books in various forms in countries in Europe and elsewhere around the world – has already been endorsed by many of the world’s leading economists and environmentalists as an effective way to reduce climate-ravaging carbon pollution, while at the same time collecting revenue to support greener, more earth-friendly sources of energy.

Yet what Conservative Party leaders do in Canada – just as their soul brother Donald Trump does in the United States – is smear this effort to place a price on pollution as some sort of crippling tax on consumers.

It is all a way for Conservatives to do the bidding of their masters in the tar sands and petro-chemical industry.

And what is so disgraceful about it, they are playing this game for their corporate masters while we run the risk of losing a global battle against a climate emergency that could leave our children and grandchildren in a world that is environmentally and economically unrecoverable. 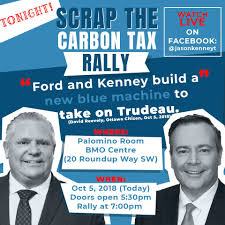 A poster for a 2018 Doug Ford/Jason Kenney “Carbon Tax Rally.”

It should be enough to convince any and all of us who care about the future to never elect a Conservative to a seat in provincial or federal parliament again on the grounds that this party’s record on climate change and environmental issues in general poses a global security risk.

Niagara At Large will continue following the efforts environmental groups are making in the courts and in our communities to break through the walls of resistance by the defenders of dirty oil, including Conservative Parties in Canada and their Trump Republican allies in the United States.

About ENVIRONMENTAL DEFENCE – (www.environmentaldefence.ca): Environmental Defence is a leading Canadian advocacy organization that works with government, industry and individuals to defend clean water, a safe climate and healthy communities.