Celebration of Nations Continues in St. Catharines/Niagara this Saturday and Sunday

News from the Organizations of Niagara’s Celebration of Nations 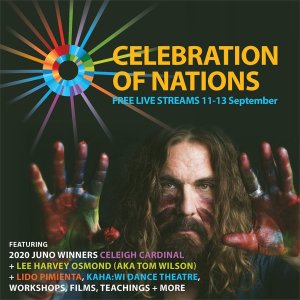 St. Catharines, Ontario  – Celebration of Nations 2020 opened on Friday 11 September with a powerful message that reflected upon the many challenges humanity currently faces while honouring a group of remarkable achievers whose accomplishments have diffused knowledge, broadened awareness, and inspired us to live lives of meaning, purpose, enjoyment, and responsibility.

This year’s deserving recipients include deeply experienced, highly skilled, and seriously accomplished people who have displayed consistent dedication to their respective fields of interest and who, through their work, have sought to unite people through their common interest in securing a sustainable future for the Seventh Generation.

The 2020 Celebration of Nations Outstanding Achievement Award-winners are:

This deserving recipient is a remarkable talent who has traveled throughout Turtle Island and around the world entertaining audiences for the last 20 years.

As a multiple-threat artist trained in dance, voice, and performance, she has worked with many celebrated ensembles, including as a member of the original North American cast of Mirvish Productions’ Mamma Mia; and also with Factory Theatre, Native Earth, Red Sky, The Blyth Festival, The Charlottetown Festival, The Toronto Mendelssohn Choir, The Toronto Symphony Orchestra, the 2010 Vancouver Cultural Olympiad, the Smithsonian Institution, and most recently as a member of the Acting Company at the Stratford Festival.

Across the Atlantic she also performed in the multi-award-winning musical Jerry Springer—The Opera and in Disney’s Beauty and the Beast. All of that is enough reason to shower accolades upon this artist. However, when you add to it the knowledge that as a 60’s scoop witness she made her way home and has collaborated on many roles within Indigenous theatre and opera, all of which have helped her reclaim her Indigenous identity as a person of mixed Cree and European descent, combined with a 2020 Dora Mavor Moore Award, her accomplishments are all the more remarkable.

We greatly admire and appreciate those artists whose commitment to their craft remains a lifelong passion in pursuit of excellence, but also who apply their talents — in a variety of creative and unexpected ways — beyond their prioritized genre. Such is the case for this artist whose work became iconic in the field of Indigenous fashion. Through her use of leather and suede and incorporation of symbolic motifs she developed a style that became synonymous with “Indigenous luxury.”

Designer for the stars of stage and screen, and all manner of glamourous clients, she set the standard for working in traditional materials in ways that visually acknowledged and advanced the Indigenous cultural heritage of Canada. But moreover, she has recently taken to developing a stunningly impactful public artwork on the shoreline of Hamilton, entitled All My Relations, that speaks to all those who value the waterfront to remind them of the beauty that surrounds them every day.

She is therefore honored for these accomplishments, for her grace, and for the glorious and inspiring aesthetics she has consistently fashioned and brought into our lives.

Over the course of a lifetime, some answer the call to service with special distinction. Whether as a member of the Haudenosaunee External Relations Committee, the Documentation Committee, the Standing Committee on Burials and Burial Regulation, the Wildlife and Habitat Authority, and the Environmental Task Force, among other important responsibilities, this award recipient has applied intellect, with respectful humility, to help sustain Indigenous agency.

For more than 40 years, as counsel to Indigenous nations, including the Haudenosaunee, Anishinaabe, Passamaquoddy, and Maliseet, he has negotiated and, more reluctantly, litigated the restoration of land, hunting, and fishing rights, human remains, and sacred objects. His writing includes a masterful textbook, Kaianerenkó:wa, the Great Law of Peace of the Haudenosaunee, and a forthcoming tome on treaties. For those of us who have worked to advance education about the Haudenosaunee experience, it is hard, if not impossible, to overstate

the intellectual contribution represented by his book on The Great Law, and how it serves as the basis and foundation for the diverse, but related forms of governance in practice across the Haudenosaunee world today. For his brilliant instruction at the University of Toronto Faculty of Law, McMaster University, First Nations University, and Kawenni:io High School at Six Nations of the Grand River, for all of this and what is yet to follow we honour this remarkable intellectual.

For reconciliation to stand for something real, for it to mean anything, there has to be direct engagement and dialogue across the cultural divide.

There need to be outlets for Indigenous expression, for the sharing of histories which have been hidden from public view and, therefore, civic understanding, for difficult issues to be analyzed and explained from an Indigenous perspective, and for values to be shared in the interest of reaffirming and polishing the Covenant Chain between all peoples who contributed to the defence and founding of our shared reality, part of which includes a country called Canada.

Through their One Dish, One Mic radio program — the podcast that became a broadcast — these recipients have been providing a uniquely urban Indigenous perspective on matters of all kinds. In so doing they’ve opened a window into a bright, active, diverse, and dynamic Indigenous world that often exists as an invisible dimension unperceived by the majority in society.

Their earnest and entertaining work, advancing dialogue in Niagara through their One Dish, One Mic radio program on CKTB 610 AM, has been recognized by the Canadian Journalism Foundation, which awarded them a CJF-CBC Indigenous Journalism Fellowship, a well-deserved distinction.

Outstanding Achievement in Empathic Traditions — our beloved Mother of Nations, the esteemed and venerable Katsi Cook

This award recipient holds a special place in our hearts and the hearts of many people throughout the Haudenosaunee diaspora and many other communities as well. As a Mohawk midwife living along the St. Lawrence River, her inspirational leadership has consistently reminded us of the sanctity of water, of the need for clean and healthy water in raising our families.

Her teachings about the vital nature of water in supporting life, including the water world of the ‘First Environment,’ the mother’s womb, has nurtured empathic responses and established memorable intellectual and emotional connections that have aided the physical and mental health and well-being of people in our communities.

For her work as a healer and environmental health researcher. For her scientific studies of the effects of toxic pollutants on Mohawk families. For her service as an ambassador of Indigenous women and girls’ leadership circles. For being a founding member of the National Aboriginal Council of Midwives.

For helping to establish the Six Nations Birthing Centre. And for serving as Executive Director of the innovative Spirit Aligned Leadership Program, we honour our beloved Mother of Nations, Katsi Cook.

Our most precious friends are those with whom we share mutual trust and respect, who reflect our same values, and who reciprocate sincere extensions of good will. For being such a person, we take this opportunity to honour a good friend and ally today.

Public servants are at their best when they understand their role in advancing the humanities. Politics. Law. History. Literature. Language. Culture. All reside within the humanities. And it’s often in these areas where the intersections between Indigenous peoples and Canadians converge, sometimes creating challenges, but other times revealing opportunities. Now, he may not have realized we’ve been watching, but we have.

For his steady service as distinguished member of the Legislative Assembly of Ontario who has carefully attended to the interests of his constituents since 2014, for standing with Indigenous peoples leading up to and at the unveiling of the Landscape of Nations Memorial at Queenston Heights in 2016, for helping us launch

Celebration of Nations in 2017, for his tireless dedication in upholding Niagara’s historic alliance with Indigenous peoples, and for his consistent application of the good mind Wayne Gates is most worthy of this distinguished honour.

We congratulate all 2020 Celebration of Nations Outstanding Achievement Award recipients.

The Celebration of Nations Outstanding Achievement Awards are determined by a committee comprised of Tim Johnson, Michele-Elise Burnett, Sara Palmieri, and Annie Wilson (core founders of the gathering). As the tone and tenor of the awards are established and a critical mass of recipients is achieved, the committee will expand to include previous award winners as both nominators and deciders of the awards.

All livestreams are FREE to watch via Facebook or YouTube – with no registration necessary. All times are Eastern Standard Time (EST).

Celebration of Nations is part of a long-term vision of the FirstOntario Performing Arts Centre, Kakekalanicks and the City of St. Catharines to build on the Two Row Wampum that promotes all Nations walking together, in parallel, with respect, compassion and understanding to cultivate an inclusive community for our shared future.

It is intended to provide opportunities for national and international visitors to actively participate in an inclusive and engaging community gathering that will foster a greater sense of belonging, support meaningful reconciliation, and leave a lasting legacy of goodwill for future generations.

To read a recent post in Niagara At Large about Karl Dockstader, and about the public outcry and the support he is receiving following his arrest by police, while doing his job as a journalist, click on – https://niagaraatlarge.com/2020/09/10/an-indigenous-lawyers-words-of-defence-for-niagara-activist-and-indigenous-journalist-karl-dockstader/