The COVID Death Count in Trump’s America is now 170,000 and Climbing – Almost Three Times the Number of Americans Killed during more than a decade of combat in the Vietnam War! 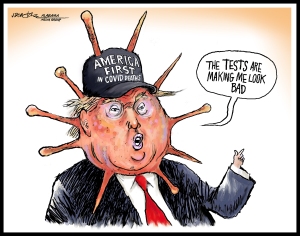 A Brief Commentary by Doug Draper at Niagara At Large

If you happened to miss the first night of the televised U.S. Democratic National Convention this August 17th, one of the most powerful addresses by an ordinary American during the program was delivered by a young woman named Kristin Urquiza, whose recently lost her father to COVID-19.

If you missed this address, or even if you saw it, it is well worth sharing with anyone who has any doubts about what a dangerous monster Donald Trump is.

To watch it here, click on the screen immediately below –

I for one, can hardly wait until this orange-hair monster is dragged out of the White House, because even if he loses this coming November’s presidential election in a landslide, they are going to have to drag him out, and thrown in jail.

To all of my American friends and neighbours – Get out and vote in droves this fall, and  throw this dangerous character out, for the sake of the future of your country and the world!