Keeping Canada-U.S. Border Closed is a Matter of Life and Death

If the Trumpies Want to Play Chicken with this Killer Virus, Let Them Do It In Their Own Country. We Don’t Need Them Bringing That Dangerous Game Across the Border to Canada

We can’t let Trump export his Coronavirus cases to Canada

A Commentary by Doug Draper of Niagara At Large, followed by a demand to keep the Canada-U.S. border closed, issued in a news release from Niagara Falls, Ontario MPP Wayne Gates 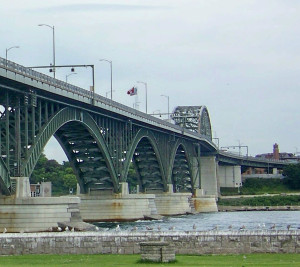 The Peace Bridge, a major Canada-U.S. border crossing at Niagara, Ontario and Buffalo, New York. If Trump wants to continue playing a game of chicken with COVID-19, then keep the border crossings closed, please

And before my commentary gets started, let me be up front about this.

What I have to say is probably going to come across a lot less diplomatically than the way the Niagara Falls MPP is putting it in his news release, and Wayne Gates should certainly not be blamed in any way for my remarks.

I think it is good of Wayne Gates to say what he has, as diplomatically as he has, about the need to continue keeping the Canada-U.S. border crossings closed to everyone and everything but absolutely essential traffic. 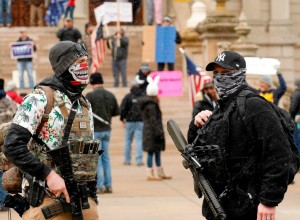 In the U.S. city of Lansing, Michigan, some of Trump’s fans – self-anointed, armed militia, were among those protesting efforts by the state’s governor to keep non-essential busineses temporarily closed and keep as many people as possible home.

And now I am going to say the following after days of listening to the nut cracker that the United States has as a president talking about moving away from lockdowns and shutdowns put in place by U.S. governors and mayors to keep as many Americans safe at home as possible, and huffing and puffing to get the country back to business as usual again.

There are already a number of states, mostly right-wing Republican, who are fully behind Trump on this, and there are millions of his supporters across the country, including a huge bunch that get all their brain food from Fox News, who have continued to believe, all the way through, that this pandemic is overblown, or some sort of left-wing conspiracy, or a hoax or a joke.

There have been multiple reports about crowded beaches, and people packing into churches, believing that God will protect them.

In the State of Michigan, where the governor has, by many accounts, done her best to set responsible rules around social distancing, encouraging people to stay home, and closing down all but essential services, hordes of Trumpies took to the streets of the state’s capital, Lansing, in large numbers recently (no social distancing required or even possible) to demand that these rules be relaxed or rescinded immediately.

At a recent protest in Michigan, her “constitutional rights” seem to tell her that she wants to get back out of the house where she can risk endangering herself and others.

Whether it is because of this pressure or not, the government of Michigan has reportedly just announced plans to begin “re-opening” businesses and other sectors on May 1st. Yes in Michigan, a state that as of this April 17th has the 5th largest number of confirmed COVID-19 cases of all 50 states in the Union at almost 30,000.

And that is only the number of cases in Michigan that are known.  News reports on CNN and MSNBC earlier this April 17th noted that less than one per cent of Michigan’s population of people have even been tested.

So now, with the United States, even with the little testing it has done, now showing by far the largest number of cases of any country in the world, at 700,000, there is a president and millions of his supporters moving to get people back in widespread circulation, why would Canada want to take a chance and see any of these people crossing the border.

Further south of the border, in states like Virginia and Texas, ever more Trumpies (there are millions of them) are making their statement about self-isolation.

It is heartbreaking to say this because I have many friends who live in the United States too and I know many of them are trying to be responsible. They are just as outraged as anyone in Canada to listen to the dangerous nonsense coming out of the mouths of Trump and his supporters.

I miss my American friends and I look forward to the day when I feel safe enough crossing the border to visit them again.

But not with this kind of madness at play.

By many most accounts, a majority of Canadians have been trying to do the responsible thing by staying at home as much as possible

We can’t afford to risk our health and our lives, and our economic future – more than the losses we have suffered already –  by allowing potentially irresponsible people to come across the border from Florida or Georgia or Texas or other states where the prevailing view is that this killer virus is some kind of a joke.

That may seem terribly unfair to those Americans and to those states, including neighbouring New York, who have tried to be responsible. But one hopes, given the madness going on around them, that they would understand Canadians’ concerns.

Gates has reached out directly to the federal government to express his deep concerns about Donald Trump’s dangerous proposal to re-open the border, and is vowing to fight to keep Ontario’s border communities safe:

“As a proud representative of border communities, I am saying the Canada-US border absolutely cannot open anytime soon. We cannot risk one single local resident’s life. The border must remain closed until we are sure that we have beaten this virus and that it will not risk more outbreaks. I know this is painful but if we don’t quarantine properly we only extend the pain. We need to stay home and keep people where they are.

It’s awful to be separated from our neighbours and friends across the border, but we all know this is the right action. If we don’t keep the borders closed until this is over we risk even more outbreaks in our community and prolonging this lockdown. We have to do this for our neighbours and for our seniors”

To read a post Niagara At Large posted this past March on the closing of the Canada-U.S. border to all but essential traffic, click on – https://niagaraatlarge.com/2020/03/18/canada-u-s-border-closed-to-all-but-essential-traffic/