You Are Invited to a Community Sustainability Science Café hosted by the Brock University United Nations Educational, Scientific and Cultural Organization (UNESCO)

For more details, view the poster below – 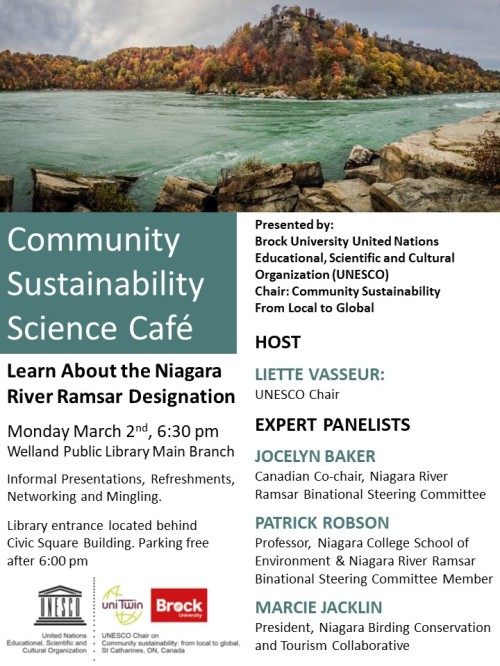 A Footnote by Niagara At Large reporter and publisher Doug Draper –

The Niagara River is a major connecting channel in our Great Lakes and one of the most iconic, scenic and ecologically significant watersheds in the world.

Over the past 100 years it has faced its share of environmental threats from toxic chemical pollution to loss of wildlife habitat, including wetlands and woodlands, to poorly planned urban development. And often government bodies in Canada have been the first to step up to the plate with measures for protecting this precious watershed we share with our American neighbours.

But on this matter – that of getting what is known as a RAMSAR designation for wetlands in the Niagara River watershed – it is parties on the American side of the river, including local municipalities, citizen groups and private landowners, who got the job of ddesignattng this watershed as a globally significant wetland area done first.

Our American neighbours hosted a celebration last year as a wetland designation for their side of the Niagara River became official while Canadians were left watching.

And yet here we are, with dedicated groups like the Brock University UNESCO Organization and other caring volunteers, working at it for at least a few years now to achieve a wetland designation for our side of the Niagara River, and we still can’t get enough support from our political leaders here, or even from the Niagara Parks Commission, which is supposed to care about protecting and preserving the Niagara River corridor.

The was a recent breakthrough on the Niagara, Ontario side with a vote of support for this initiative from the Niagara Peninsula Conservation Authority’s (NPCA) board of directors, and there are at least some at the municipal council level who have expressed support.

But what is the problem with so many other elected representatives on the Niagara, Ontario side – especially with all we now know about the important role that wetlands play in supporting a diversity of wildlife and protecting people and property from the impacts of climate change, including such destructive threats as flooding. 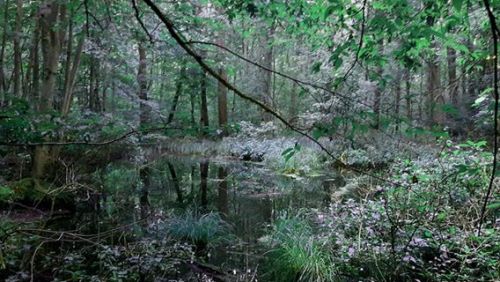 We who do care about these issues need to let our elective representatives, and let bodies like the Niagara Parks Commission know that we demand to have this wetland designation, and if they don’t follow through, we will elect political leaders who will.

If you want to find out more, please attend the free event promoted in the poster above and join a conversation with the excellent planelists who will be there.

And do what you can to light a fire under our elected representatives and public bodies to support this wetland designation. 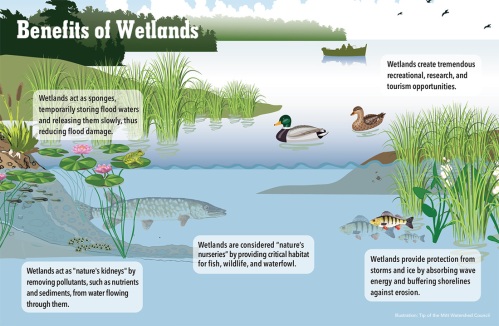