“I don’t think you have a room full of people (from across Niagara) here because they believe that the wetlands are going to be preserved.” – Carolynn Ioannoni, one of the all too few Niagara Falls city councillors opposed to the controversial Thundering Waters development project, speaking to representatives for the developers at a public meeting this January 30th

It was standing room only at the Gale Centre in Niagara Falls, Ontario for a public meeting on conroversial plans to urbanize the Thundering Waters Forest

It was a heated public meeting, to say the least.

Niagara citizens making their statement at a public meeting over plans to contaminate a Thundering Waters Forest rich with wetlands with urban sprawl.

The big room in Niagara Falls’ Gale Centre was full – there were more than 200 people and there was standing room only – and you could cut the anger and the lack of any further patience for the proposal at hand with a knife.

And the overriding message that this large gathering of Niagara citizens – young people and old, and parents and their grandparents concerned for their children’s future – had for a China-based developer called GR (CAN) Investments, and for Niagara Falls Mayor Jim Diodati and those on his city council who have shamelessly rode shotgun for this foreign development group could not have been more clear.

That message, to the China-based developer and to Diodati and the majority on his council, was this – ‘How much of we don’t want you setting a foot inside Thundering Waters Forest with our buzz saws and bulldozers do you not understand?”

Diodati, not so surprisingly, was not in that room this January 30th to hear it.

But Carolynn Ioannoni, one of the few Niagara Falls councillors (along with Wayne Campbell and Lori Lococo) who did show up – one of the very few who has been against the grandiose plan to do urbanize at least part of the 484-acre, wetland-rich Thundering Waters Forest from the start – set the tone for the meeting as one of the first ones to go to the mike

“I don’t think you have a room full of people here,” said Ioannoni to the city’s director of planning Alex Herlovitch, who found himself being a lightning rod for a fair amount of the concern and anger filling the room , “ because they believe that the wetlands are going to be preserved.”

Indeed, many of those who rose to speak in the room made it clear that they could care less about the $1.5 investment the China group is promising to deliver with this development project or however many jobs that come with it. They just want this project, at this site, to go away.

They also made mention, over and over again, of the not one, but two times that the China group had on-the-ground workers over the past two years go in to the forested area with heavy equipment, cutting down trees and damaging wetlands, breaking some of this province’s rules and regulations along the way.

The second time was this January, which landed the developers charges of violating Ontario conservation rules, filed by compliance officers for the Niagara Peninsula Conservation Authority.

Those violations are among the reasons why GR and those locally, who are still shilling for its proposal more than four years aver it was unveiled, championing their enterprise have “no credibility” for any further plans at the Thundering Waters site, said Desmond Sequeria, a citizen activist and member of a climate action group called Extinction Rebellion Niagara.

GR CEO Helen Chang, speaking through a translator, telling a room full of concerned Niagara citizens that her development firm is trying to protect wetlands in Thundering Waters Forest

With the GR developer’s Chairwoman and CEO Helen Chang and her partners sitting in the room, Sequeria asked who the firm can’t built their mix of residential and commercial buildings on any one of a number of industrial brownfields available in the region rather than in a sprawling area of trees and wetlands that are more necessary than ever to absorb climate-changing carbon pollution.

“What are you going to tell your grandchildren, Sequeria asked those supporting the development project. “Our house is on fire and you are contributing to making it worse.”

Shannon Duggan, a young parent and a member of a new group of climate action activists in the region called For Our Kids Niagara, went to the mike to ask Chang and her China group directly if they believed the world is facing a climate emergency.”

Through an interpreter, Chang fell short of repeated demands from Duggan to answer with a “yes or no.” Her failure to do so drew audible sighs of displeasure from many in the audience.

Niagara Falls resident Linda Manson, responding to repeated failures by representatives for the developers to provide detailed information about vegetation and wildlife on the land or the ecological impact their plans would have on it, said the city “needs to insist on an independent peer review of this project.” 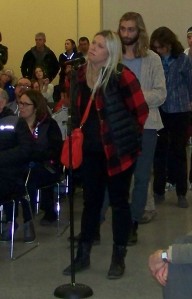 Niagara climate activist Shannon Duggan, a member of a group called For Our Kids Niagara, asks GR developers if they believe we are facing a “climate emergency”.

Manson also pointed to alleged acts of damaging areas of the Thundering Waters lands in and around provincially significant wetlands (PSWs) – acts, she said, that “demonstrate a repeat pattern of defiance, destruction and denial” that should spell the end of any efforts by the developer to “seek approval to continue.”

Derek Jones, another Niagara Falls resident who lives near the Thundering Waters lands in the city’s southwest end, and who has been opposed to the GR project going back to its inception more than four years ago, charged that “driving a bulldozer through wetlands” shows “no respect for our culture and laws.”

Jones went on to slam the so-called “city within a city” the GR developers are proposing to build on the Thundering Water lands “an abomination” that “misses all of the marks of sustainable development.”

Noting the Niagara Falls mayor’s continued support for the GR project, Jones wondered out loud if Diodati was “elected to serve local constituents or a foreign developer and a communist government.”

He and others vowed not to stop opposing the proposal until the developers finally give up on it and go away.

Shannon Duggan, at the mike at right, is still waiting for an answer from GR developers on whether or not we face a climate emergency.

Niagara At Large will have more on the Thundering Waters issue and concerns about weaknesses in the rules and policies in place in the Niagara area for what we have left of protecting and preserving our provincially significant wetlands in the days ahead.

Stay Tuned to NAL for more.

For more recent commentary Niagara At Large posted on this issue, click on – https://niagaraatlarge.com/2020/01/30/lets-win-the-fight-to-save-niagaras-thundering-waters-ecosystem-for-generations-to-come/

Also, click on the following link to review who contributed to Niagara Falls Mayor Jim Diodati’s campaign in the 2018 municipal elections. We will also have more to say about this later – https://niagarafalls.ca/pdf/elections/financial-statements/jim-diodati.pdf .

NIAAGRA AT LARGE encourages you to join the conversation by sharing your views on this post in the space following the Bernie Sanders quote below.