News from Heritage Thorold LACAC, a volunteer heritage group based in Thorold, Ontario

Author and historian Sarah King Head. Proceeds from the sale of her award-winning book about Niagara’s Beaverdams area supports the good work of one of the area’s great heritage groups,  Heritage Thorold LACAC

Into its fourth printing, sales of the book Where Beavers Built Their Dams: The Evolution of a Unique Cultural Heritage Landscape in Thorold, Ontario continue to support the work of Heritage Thorold LACAC.

The history of Beaverdams is a good story; something author and historian Sarah King Head has successfully been able to tell by putting the island community’s extant heritage gems within the context of the island village’s rich, less tangible history.

She notes that what most people don’t always appreciate is how entirely Beaverdams’ “cottage country” illusion today is a creation of the past two centuries. Indeed, creation of the Welland Canals to the east and Lake Gibson to the west, south and north has transformed the landscape.

What European refugees from the American Revolutionary War found when they first arrived in the area in the late 18C was quite different: a postglacial landscape with dense hardwood Carolinian forests and incised by fast-flowing waterways (like Beaverdams Creek) that streamed toward DeCew Falls and cascaded into Twelve Mile Creek. And lots of beavers! 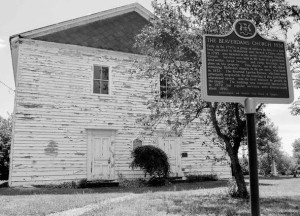 Key is the importance trails played in the Beaverdams story.

For millennia the region’s Indigenous peoples established and had relied upon a network of trails that followed the natural contours of the land atop the Niagara Escarpment, connecting upper New York State with settlements around the lower Great Lakes.

Two of these trails importantly intersected at what would later become known as the village of the Beaver Dams, Thorold Township’s first permanent settlement. By the turn of the 19th Century a community had emerged at the crossroads and was soon subdivided around the Old Beaverdams (Smith) cemetery by none other than Thorold patriarch, George Keefer.

Wholly man made, anthropogenic transformations to the landscape came first with construction of the four Welland Canals over the course of a century beginning in the early 19th Century and then the flooding of the Beaverdams Creek valley to create the Lake Gibson reservoirs to fuel hydroelectric power generation at DeCew Falls in 1904 and 1947.

The front and back covers of Sarah King Head’s book

Additional industrial development between the First and Second World Wars easily exploited the abundant hydro-resources and further transformed the biome.

It also bears witness to an ancient Indigenous cultural landscape and land-use activities through continued use of aspects of the arterial network. The book thus celebrates Indigenous and European legacies in one of southern Ontario’s most unique relict and evolving cultural heritage landscapes. 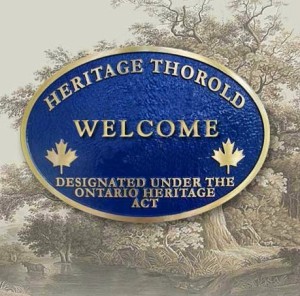 The book earned the Architectural Conservancy of Ontario’s Margaret and Nicholas Hill Cultural Heritage Landscape Award in 2017 and was described in the Ontario Historical Society’s Bulletin in 2018 as “a model for other communities working toward heritage designation or simply wanting to document their own cultural heritage.”

Copies can be bought at Thorold City Hall or at the Lock 7 Museum. All proceeds go to Heritage Thorold LACAC.

For more information on Thorold Heritage LACA and its important efforts to protect and preserve our heritage sites in Niagara, click on – http://www.heritagethorold.com/